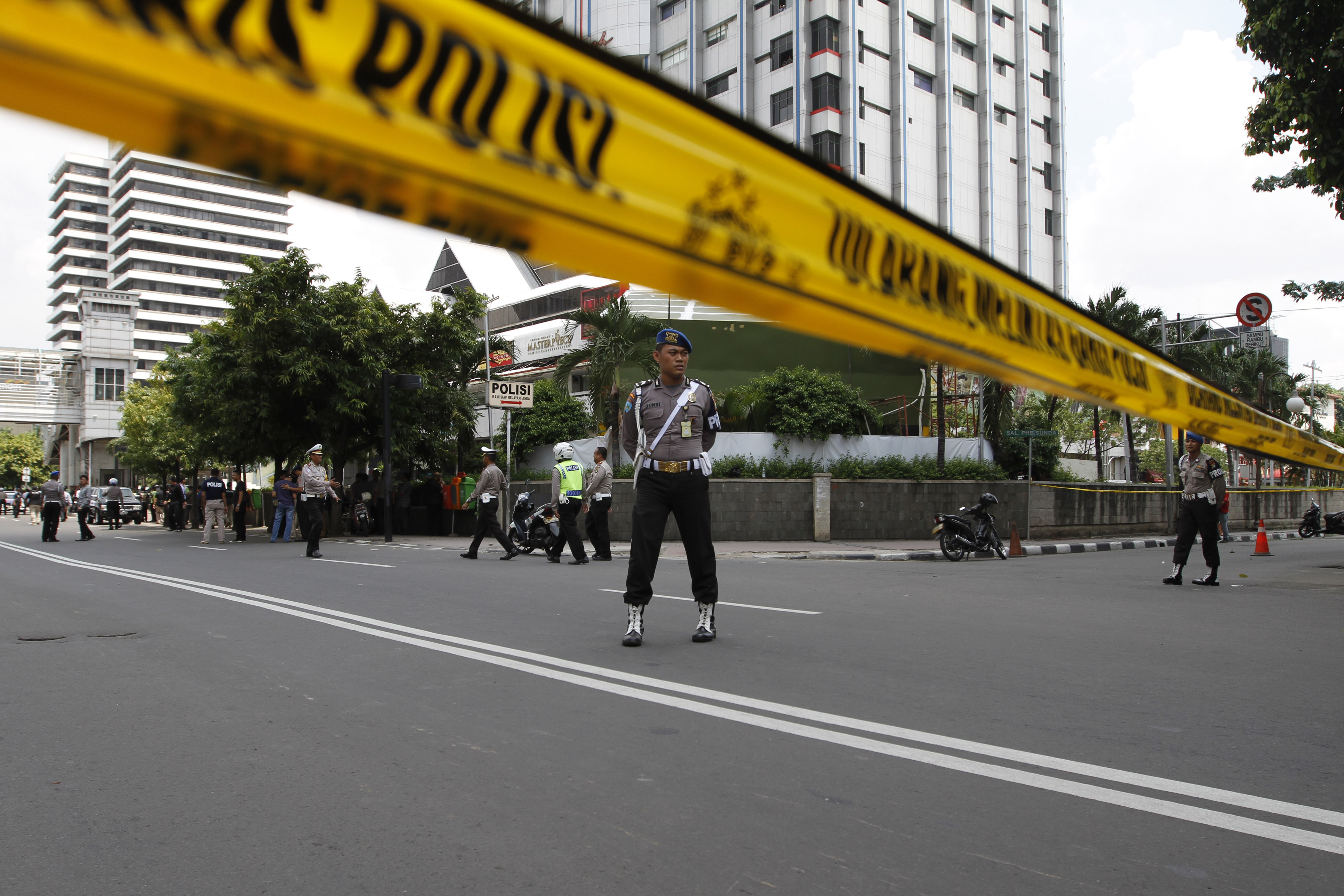 JAKARTA, Indonesia (7th UPDATE) – Suicide attackers struck the Indonesian capital Thursday, January 14, with a series of explosions and gunfire that tore through a Starbucks cafe and shook an embassy district in the Muslim-majority nation.

At least 7 people were known to have died – including two who police said blew themselves up in the area which is also overlooked by United Nations offices, in what the country’s president dubbed “acts of terror.”

An unknown number of gunmen were involved in the blasts, including at a police post that left 4 mangled bodies lying in the road.

“Five terrorists are dead,” Security Minister Luhut Panjaitan told reporters. He said that one Indonesian and one Dutch citizen had died, but the Dutch embassy said only that one of its nationals was wounded and being treated in hospital.

While no one has yet claimed responsibility for the attacks, they have revived fears that home-grown extremists bloodied on the battlefields of the Middle East with the Islamic State (ISIS) group could have brought their jihad home.

Indonesia suffered several major bomb attacks by Islamic radicals between 2000 and 2009, including the 2002 strike on the resort island of Bali that killed 202 people.

A security crackdown weakened the most dangerous networks, leading to a long lull in large-scale strikes.

But the European-based Soufan Group says that of the 500-700 Indonesians who travelled abroad to join the self-proclaimed caliphate of the ISIS, scores have since returned. 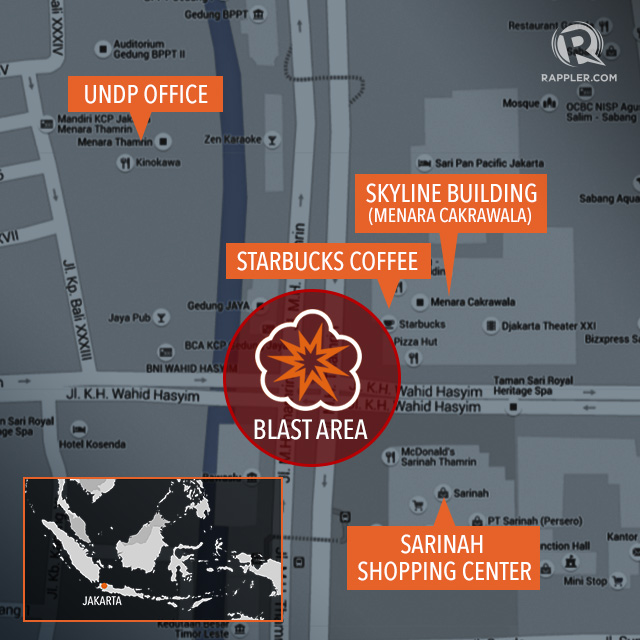 “We know that ISIS has the desire to declare a province in this region,” said Kumar Ramakrishna, a counter-terrorism analyst at the S. Rajaratnam School of International Studies in Singapore.

“The threat of returning Southeast Asian fighters radicalised in the Iraq/Syria region are also another factor of concern, together with the possibility of self-radicalised lone wolves appearing in the scene.”

Witnesses to the carnage on Thursday said a powerful explosion ripped through a branch of US coffee giant Starbucks before at least one gunman emerged and began shooting at bystanders, reloading his weapon as police flooded the streets.

In chaotic scenes, security forces moved in behind the cover of moving vehicles, with regular bursts of gunfire and warnings of a sniper in the area.

As well as the confirmed deaths, a number of people were feared injured, with an eyewitness telling Agence France-Presse he had seen a “terrorist” repeatedly shooting at bystanders, including a local journalist. 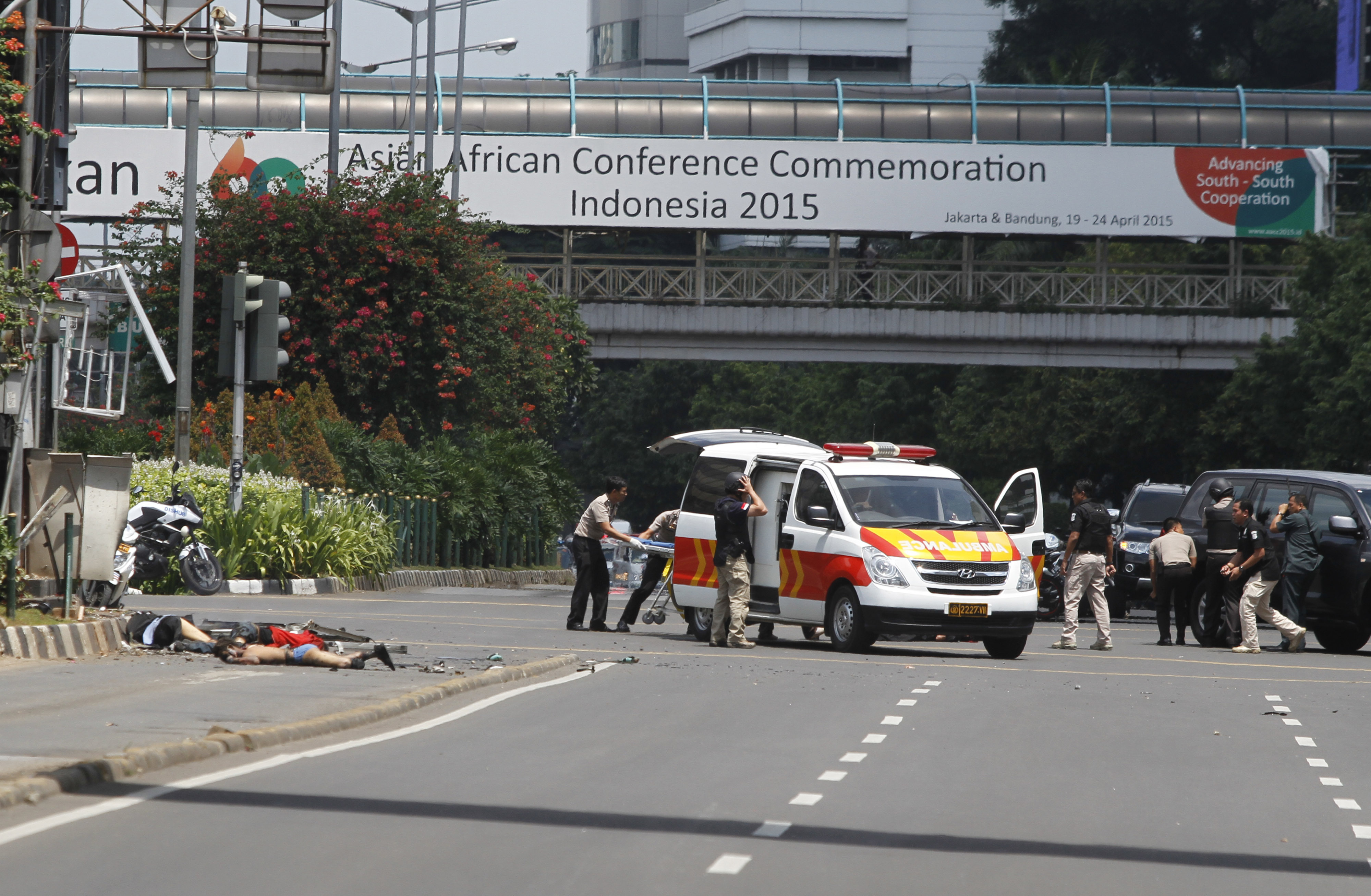 “I heard a loud bang, boom. It felt like an earthquake. We all went downstairs,” said Ruli Koestaman, 32, who had been in a nearby building when the attack started around 10:35am (0335 GMT).

“We then saw that the Starbucks downstairs was destroyed too. I saw a foreigner – westerner, a man – with a mangled hand but alive.

“A Starbucks waiter then ran out with blood coming out of his ear. And I asked anyone hurt inside, he said yes, one. Dead already.

“Then everybody gathered and a terrorist appeared. He had a gun and started shooting at us and then at Starbucks. Then the police post… exploded.”

The blasts – at least 6, according to eyewitnesses – were close to a shopping centre, the Sarinah.

Graphic photographs from the scene showed the bloodied bodies of what appeared to be two men in civilian clothes lying by the side of a road next to the wrecked police post.

Another body, also apparently male, dressed in black was pictured lying on his back in the center of the street while another, almost naked, lay nearby.

US-based coffee giant Starbucks said one of its customers was injured, as it announced it was shuttering all branches in the Indonesian capital. 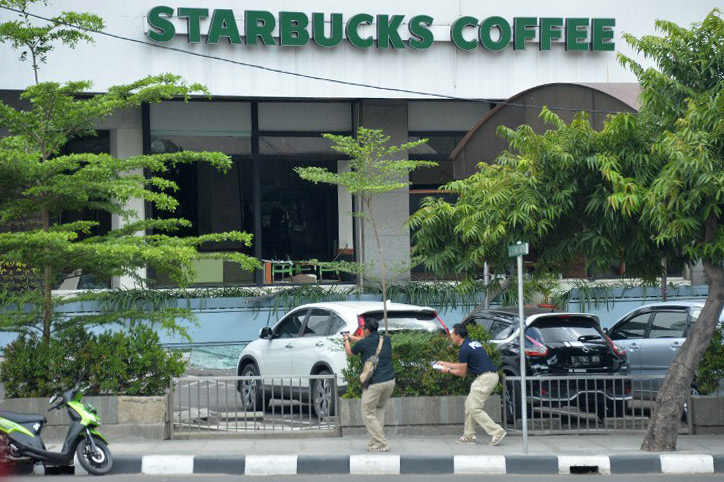 “This store and all other Starbucks stores in Jakarta will remain closed, out of an abundance of caution, until further notice,” a statement said.

The area is home to several embassies, including those of the United States, France and Spain. A number of United Nations agencies are also housed nearby.

Britain and Australia advised their nationals to avoid the area.

“Our nation and our people should not be afraid, we will not be defeated by these acts of terror,” he said, in comments broadcast by MetroTV. 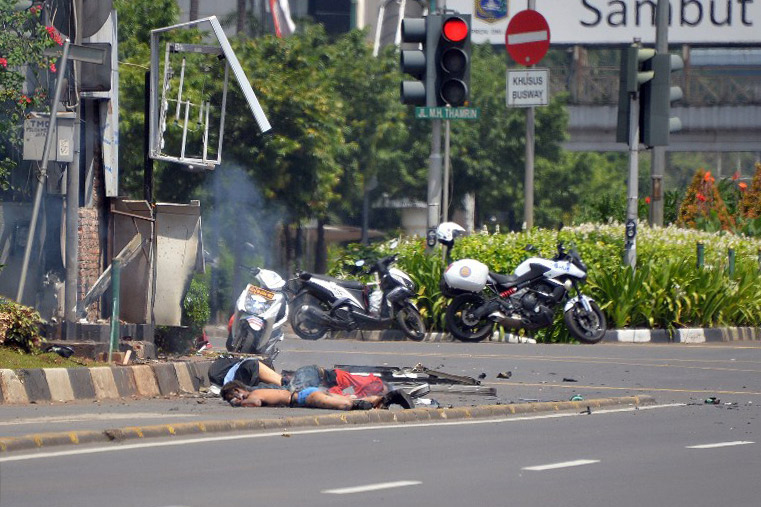 “We all are grieving for the fallen victims of this incident, but we also condemn the act that has disturbed the security and peace and spread terror among our people.”

It was not immediately clear who was behind the attacks, but national police spokesman Anton Charliyan said they came after the ISIS group issued a cryptic warning.

“The warning said there will be a concert in Indonesia and it will be international news,” he told a local radio station.

He did not give any further details, or say when the warning was issued.

Police foiled several terror plots in Indonesia last month, with some believed to be linked to IS. Jakarta was placed on high alert after anti-terror police foiled what they said were plans for an New Year suicide attack. – Olivia Rondonuwu, AFP / Rappler.com