Jan 14, 2016 7:09 PM PHT
Agence France-Presse
Facebook Twitter Copy URL
Copied
(4th Update) ISIS claimed responsibility, saying that the attack was carried out by 'soldiers of the caliphate' who targeted a gathering of citizens from the 'crusader coalition,' referring to the US-led alliance combating the jihadists 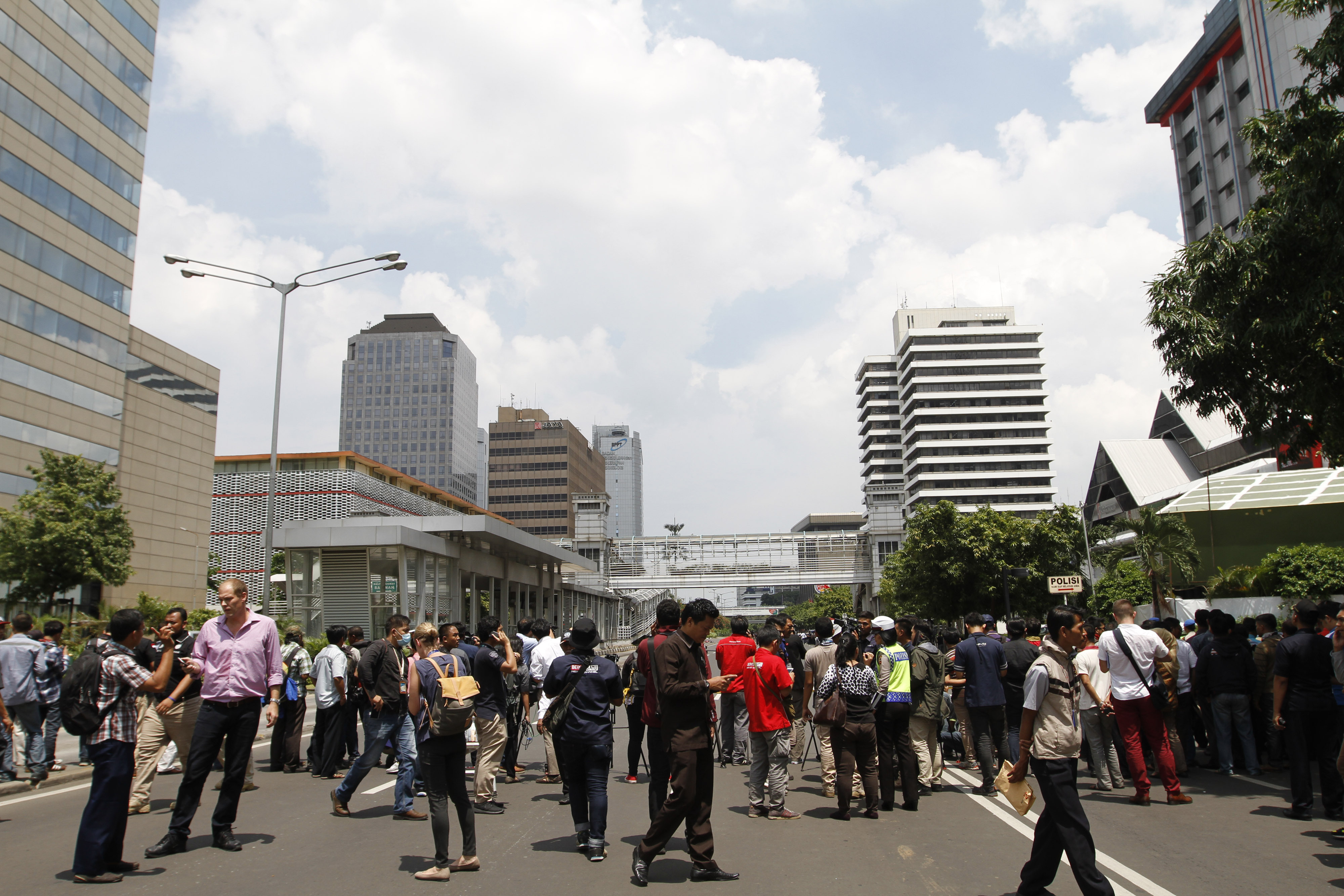 JAKARTA, Indonesia (4th Update) – Islamic State (ISIS suicide bombers and gunmen struck the capital of Muslim-majority Indonesia Thursday, January 14, executing a Westerner and blowing up a Starbucks in an assault police said bore the hallmarks of the Paris attacks.

The assault on a district packed with malls, embassies and United Nations offices also left an Indonesian man dead and 20 others injured, in what the country’s president called “acts of terror”.

ISIS claimed responsibility, saying that the attack was carried out by “soldiers of the caliphate” who targeted a gathering of citizens from the “crusader coalition,” referring to the US-led alliance combating the jihadists.

Jakarta police said the attack – which also destroyed a police post – was carried out by a network with links to ISIS in Syria and indicated Indonesian extremist Bahrum Naim, thought to have joined the jihadists, may have been involved in plotting it.

The ISIS attack will send a chill through Indonesia and other parts of Southeast Asia with Muslim populations, where there are fears extremists bloodied on Middle Eastern battlefields could have brought their jihad home.

After the first explosion, men armed with pistols took two foreigners hostage – an Algerian and a man Ottawa said they had been told by Indonesian authorities was a Canadian.

National police spokesman Anton Charliyan said the Algerian managed to escape with bullet wounds, but the second man was shot dead on the spot.

“Soon afterwards, two men riding… motorbikes, ran into a police post and blew themselves up,” he said, adding four officers had been left in a critical condition.

“From what we see today, this group is following the pattern of the Paris attacks,” he added, referring to a wave of killings on the streets of Paris in November that left 130 people dead.

Witnesses described a gunman emerging from Starbucks, who began firing at bystanders and reloading his weapon as security forces approached, taking cover behind vehicles.

“I heard a loud bang, boom. It felt like an earthquake. We all went downstairs,” said Ruli Koestaman, 32, who had been in a nearby building when the attack started mid-morning.

“We then saw that the Starbucks downstairs was destroyed too. I saw a foreigner — Westerner, a man — with a mangled hand but alive.

“A Starbucks waiter then ran out with blood coming out of his ear. And I asked anyone hurt inside, he said yes, one. Dead already.

“Then everybody gathered and a terrorist appeared. He had a gun and started shooting at us and then at Starbucks. Then the police post… exploded.”

Graphic photographs from the scene showed the bloodied bodies of what appeared to be two men in civilian clothes lying by the side of a road next to the wrecked police post.

Another body, also apparently male, was pictured lying on his back in the centre of the street while a fourth, almost naked, lay nearby.

Jakarta police chief Tito Karnavian said bombs containing screws and nails were hurled at police during the shootout, and they found six bombs planted in the area after the hours-long assault ended. (READ: ISIS issued cryptic warning ahead of Jakarta attacks)

Starbucks said it was shuttering all branches in the Indonesian capital until further notice “out of an abundance of caution” after the attack.

The area is home to several embassies, including those of the United States, France and Spain. A number of United Nations agencies are also housed nearby.

The UN Environment Program said a married Dutch employee had been seriously hurt in the attacks and remained in a critical condition.

“Our nation and our people should not be afraid, we will not be defeated by these acts of terror,” he said, in comments broadcast by MetroTV.

“We also condemn the act that has disturbed the security and peace and spread terror among our people.”

US Secretary of State John Kerry led a wave of global condemnation, saying ISIS was merely inviting “its own destruction”.

“There is nothing in any act of terror that offers anything but death,” Kerry told journalists in London.

Indonesia suffered several major bomb attacks by Islamic radicals between 2000 and 2009, including the 2002 strike on the resort island of Bali that killed 202 people. (READ: Timeline: Terrorist attacks in Indonesia)

A security crackdown weakened the most dangerous networks, and there had been no major attacks since 2009, when several foreigners were killed in suicide bombing attacks on luxury Jakarta hotels.

But the New York-based Soufan Group says that of the 500-700 Indonesians who travelled abroad to join the self-proclaimed caliphate of the IS, scores have since returned.

“We know that ISIS has the desire to declare a province in this region,” said Kumar Ramakrishna, a counter-terrorism analyst at the S. Rajaratnam School of International Studies in Singapore.

“The only group that has the capability and the intention to mount coordinated, simultaneous attacks in Jakarta is the ISIS network,” he said.  – Nick Perry and Dessy Sagita, AFP/Rappler.com

More on the Jakarta attack:

Jokowi on Jakarta blasts: We condemn this act of terror

#KamiTidakTakut: Indonesians unfazed in the face of terror

ISIS attacks will lead to its own demise – Kerry