Facebook Twitter Copy URL
Copied
'Implementation Day' for the accord comes after the International Atomic Energy Agency (IAEA) says its 'inspectors on the ground verified that Iran has carried out all measures' agreed under the deal.

Iran’s President Hassan Rouhani, whose 2013 election helped launch the Herculean diplomatic effort towards the July 14 Vienna deal, said it was a “glorious victory” for the “patient nation of Iran.”

“Implementation Day” for the accord came after the International Atomic Energy Agency said its “inspectors on the ground verified that Iran has carried out all measures” agreed under the agreement.

These will include sanctions on Iran’s lifeblood oil exports and open up the 80-million-strong country to business. Rouhani has predicted a “year of prosperity” for his country.

“This achievement clearly demonstrates that with political will, perseverance, and through multilateral diplomacy, we can solve the most difficult issues,” Mogherini said in Vienna in a joint statement with Iranian Foreign Minister Mohammad Javad Zarif.

The announcement also followed news of a prisoner swap between Iran and the United States in another sign of thawing relations between the two foes since the agreement was struck.

The steps taken by Iran, combined with ultra-close IAEA inspections, extend to at least a year – from a few months previously – how long Iran would need to make one nuclear bomb’s worth of fissile material.

They include slashing by 2/3 its uranium centrifuges, reducing its stockpile of uranium – enough before the deal for several bombs – and removing the core of the Arak reactor which could have given Iran weapons-grade plutonium.

Iran has always denied wanting nuclear weapons, saying its activities are exclusively for peaceful purposes such as power generation.

“Today… the United States, our friends and allies in the Middle East, and the entire world are safer because the threat of the nuclear weapon has been reduced”, US Secretary of State John Kerry said in Vienna, while UN Secretary General Ban Ki-moon said it was a “significant milestone.” 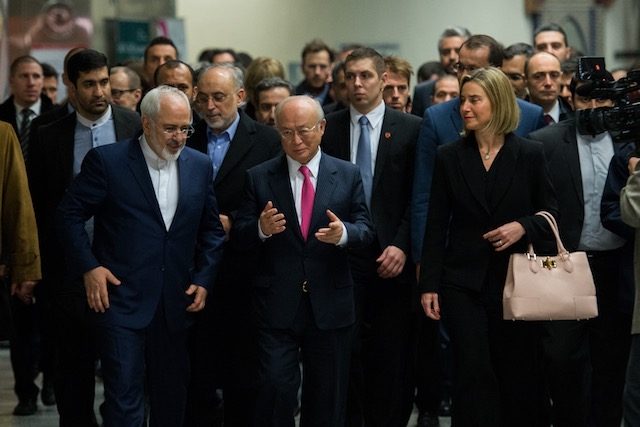 In what was hailed as a momentous diplomatic breakthrough, the Vienna agreement was nailed down in July after two years of rollercoaster negotiations following the moderate Rouhani’s election.

The highly complex deal drew a line under a standoff dating back to 2002 marked by failed diplomatic initiatives, ever-tighter sanctions, defiant nuclear expansion by Iran and threats of military action.

In addition it put Iran and the United States on the road to better relations some 35 years after the Islamic revolution that toppled the US-backed shah, and at a particularly explosive time in the Middle East.

The five detainees to be freed by Iran included Washington Post correspondent Jason Rezaian, a senior US official said Saturday. Four of the 5 were still in the country because “logistical steps” were still ongoing, an official said.

In exchange Washington said it had granted clemency to seven Iranians, six of whom were dual US-Iranian citizens, and dropped charges against 14 more.

The agreement, heralded as US President Barack Obama’s biggest major foreign policy triumph, has by no means been universally cheered, however.

Obama’s Republican opponents charge that it fails to do enough to ensure Iran will never get the bomb, a complaint shared by Israel, Iran’s arch foe widely assumed to have nuclear weapons itself.

Israeli Prime Minister Benjamin Netanyahu said Saturday Iran “has not relinquished its ambition to obtain nuclear weapons, and continues to act to destabilise the Middle East and spread terror throughout the world”.

Already Saudi Arabia and Iran, fighting a proxy war in Yemen and key players in the Syrian conflict, are at daggers drawn following Saudi Arabia’s execution of a Shiite cleric this month and the subsequent ransacking of the Saudi embassy in Tehran.

Iran’s imminent return to the oil market has also contributed to the sharp slide in the price of crude to 12-year lows of under $30 per barrel this week, putting Riyadh’s public finances under strain – and meaning that Tehran’s oil bonanza will be less lucrative than it had hoped for.

The deal has more than a decade to run, which is likely to be a bumpy road, experts say, not least if more hardline governments take power in Tehran or Washington.

A “snapback” mechanism ensures that many of the sanctions can be swiftly reimposed, and a special joint commission is meant to handle any misunderstandings. – Simon Sturdee with Arthur MacMillan in Tehran, Iran, AFP / Rappler.com