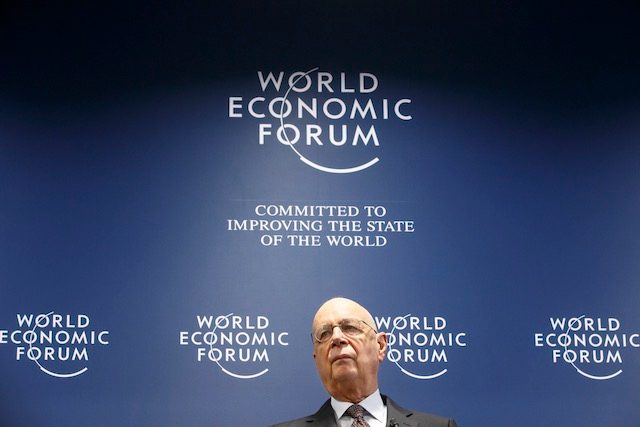 Facebook Twitter Copy URL
Copied
World Economic Forum: Europe's migrant crisis and devastating terror attacks will combine with the plunging oil price and China's economic slowdown to give the elite of the political and business worlds plenty to talk about

PARIS, France – Europe’s migrant crisis and devastating terror attacks will combine with the plunging oil price and China’s economic slowdown to give the elite of the political and business worlds plenty to talk about when they gather in Davos from Tuesday, January 19.

Over 40 heads of state and government will join chief executives, NGO leaders and Hollywood stars as they converge on a Swiss ski resort – transformed into a highly secure fortress for the occasion – for their annual attempt to try to plot a way through the world’s complexities.

Vice President Joe Biden leads a heavyweight US delegation that also includes Secretary of State John Kerry and Defense Secretary Ashton Carter. They will rub shoulders with far-left Greek Prime Minister Alexis Tsipras, who will lock horns once again with German Finance Minister Wolfgang Schaeuble in what promises to be an animated debate.

Argentina’s President Mauricio Macri makes his first appearance at Davos since his election in November and will lay out his case for economic reform in a country with a turbulent recent past. Afghanistan’s President Ashraf Ghani will seek understanding for his country’s ongoing unrest and Nigerian President Muhammadu Buhari will face questions about his handling of the Boko Haram insurgency in Africa’s most populous country.

Pressing the flesh with the invitees will be Oscar contender Leonardo DiCaprio, a long-time environmental campaigner, who will no doubt take the opportunity to remind the world leaders present to keep the commitments on climate warming they agreed in Paris in December.

With migrants apparently undeterred by the winter cold in their bid to reach Europe as they flee war in Syria and other countries, their plight is featured heavily in the meeting.

The deaths of dozens of people in an attack on a hotel in Burkina Faso on Friday was a reminder of the fear sown around the world in the past 12 months, and the conference organised by the World Economic Forum (WEF) is sure to mull over the economic and social effect of such outrages.

Davos always throws up unusual meetings – for example, will the Iranian foreign minister speak to his Saudi counterpart even though their countries are currently at each other’s throats?

The theme of the meeting is the “Fourth Industrial Revolution,” which WEF founder and chairman Klaus Schwab describes as the “fusion of technologies across the physical, digital and biological worlds which is creating entirely new capabilities and dramatic impacts on political, social and economic systems”.

Despite the optimism about the future, it will be the collapse of the oil price, China’s economic growing pains and the stuttering global economy that occupies much of the participants’ thinking, especially the impact of such factors on emerging economies, who will be represented by South African leader Jacob Zuma. – Fabien Zamora, AFP / Rappler.com