ISIS and Jakarta attacks: What we need to know 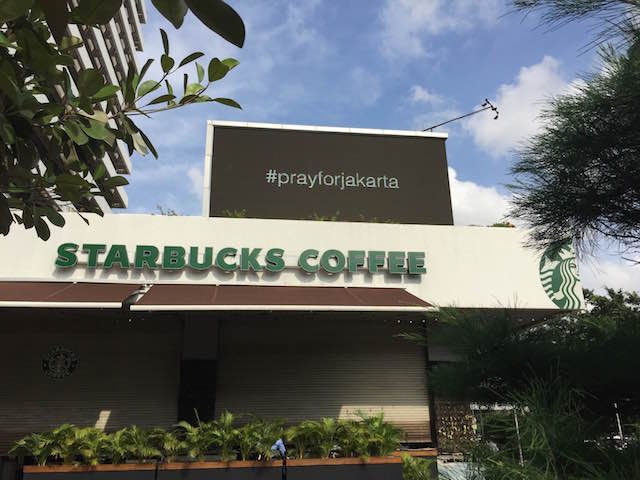 MANILA, Philippines – I knew the neighborhood of last week’s Jakarta attacks well because for nearly 20 years, I  worked in that building. That was “our” Starbucks.

I set up CNN’s bureau there in 1995 because it was a central location. To the left, Sarinah is Jakarta’s oldest mall (their Tesoro’s, the best place to get Indonesian batik and native goods). Across the street is the UN building. Next door to the right is the Sari Pan Pacific Hotel. Down the road is the National Monument (Monas) – surrounded by government ministry offices, and further down is Istana, the presidential palace.

In the late 90’s because of threats we received, we thought of how to minimise the impact of potential attacks. One of our measures was to put a special heavy-duty coating on our windows on the 6th floor that would prevent the glass from shattering in case of gunfire or an explosion.

I offer friends a terrorism tour of Jakarta because it’s indelibly etched in me. I lived behind the Australian embassy, and inevitably, when the explosions happened, I heard and felt them and rushed to report them.

There are 4 waves for Islamist terrorism in Indonesia:

Here are 4 reasons why last week’s attacks mark a significant development in the threat landscape of Southeast Asia:

1. Incompetent but deadly, powered by the same virulent ideology yearning for an Islamic state

Jemaah Islamiyah or JI, the al-Qaeda network that carried out the deadliest bombings in Indonesia, was largely degraded in the mid-to-late 2000s. Indonesian authorities arrested or killed the top and middle rank leadership, but the virulent ideology remained and burrowed deeper into Indonesia’s extremist ideologues, who have long wanted an Islamic state ruled by sharia law.

The Afghan war veterans had expert training, and when they came home, they carried out meticulously planned attacks with funding and training from al-Qaeda. The mastermind of 9/11, Khalid Sheikh Mohammed, worked closely with Hambali, the Indonesian operations chief of JI. It took money, time and training to carry out the 2002 Bali bombings, which killed 202 people. (Read: Remembering Bali, Southeast Asia’s 9/11)

By 2011, the terror networks had disintegrated, and police operations were so effective that many chose to flee the dragnet, some to the southern Philippines. Each cell was left to fend for itself: each cell tried to do what it could to live up to its ideology.

Some randomly killed police officers, like Yuli Harsono, a former soldier, who galvanized highly educated young men together. They began with what they knew. Yuli walked into a place station and shot the officer on duty. His group repeated this a few times before he was killed in an operation. The police had done such a good job that the jihadists, looking for revenge, began to target the police.

Around 2011, the terrorists switched tactics by necessity – from bombings to targeted attacks and assassinations. This was all they could do without central training and coordination.

That was around the time the extremists recruited into the vestiges of the terrorist network did suicide bombing attacks that killed only the bomber (this happened at least twice).

Last week’s attacks killed fewer than 202 people in Bali in 2002. The contrast between these two attacks show the difference between a top down, centralised command strategy and the bottom up, inspirational approach of ISIS.

The majority of the eight killed on January 14 were the bombers themselves. One Jakarta-based analyst tweeted: “I have to say that this is a dumb terrorist group.”

I have to say that this is a dumb terrorist group.

Dumb or not, here’s the warning: it shows Indonesians are still prepared to kill themselves for this virulent ideology. While they may lack capability, the intent for mass casualty attacks remain.

2. More and more of less and less

After 9/11, we watched security forces around the world grapple with the switch from Cold War tactics of defense against state actors to a non-state threat like al-Qaeda. It took nearly two years to establish new structures.

The success of the police and military after 9/11 revolved around attacking al-Qaeda’s central command, isolating and pushing Osama bin Laden and his lieutenants further and further away from the people they were trying to recruit.

While the hard-core military option killed the top and middle rank leadership of al-Qaeda and Jemaah Islamiyah, its arm in Southeast Asia, the ideology remained, and a new radicalized generation grew up.

Since 2014, ISIS issued a clarion call far more effective than al-Qaeda because it didn’t require expertise or even extended training.

Like the Internet and social media which give ISIS its power to recruit and train its converts online, its power comes from exponential growth driven by “more and more of less and less” – more and more groups with the same intent carrying out smaller attacks with less and less skill and expertise.

Moving away from iconic attacks of mass casualty like 9/11 to the Mumbai attacks in 2008 to Paris and San Bernardino in the last few months. In the last week alone, ISIS – through its proxies – carried out attacks in Istanbul, Jakarta, Pakistan, and of course, Iraq.

It’s death by a thousand cuts. (Read: How to fight ISIS? Build communities)

The Indonesian police declared the attacks were either inspired or directly powered by ISIS, and identified Bahrun Naim, an Indonesian believed to be in Syria, as its mastermind.

ISIS has a Southeast Asian military unit formed in September 2014 called Katibah Nusantara, a Bahasa speaking unit with about 450 to 500 Indonesians and Malaysians, including children and women. It has translated ISIS materials from Arabic into Bahasa Indonesia, publishing as many as 20 videos a month under ISIS’ Al-Hayat Media Centre.

Bahrun Naim works for one of the 3 key leaders of Katibah Nusantara and allegedly funded several foiled bomb plots in Solo, Central Java, targeting a Buddhist temple, a church and police stations in August 2015. Rappler reporter Febriana Firdaus visited Bahrun’s home base in Solo, ground zero of Islamic radicalism in Indonesia, and many she spoke with told her they considered the attack “small” but that “the time still hasn’t come.”

She visited the Pondok Ngruki school in Solo, founded in the late 70s by Jemaah Islamiyah emir Abu Bakar Ba’asyir, who splintered off the more violent arm of JI as JAT – Jemaah Ansharut Tauhid – in 2008. Although in prison, he has publicly stated his support of ISIS.

A satellite school of Pondok Ngruki is in Lamongan, East Java, and it plays a crucial role in events today. It’s another hub of JI activities – the home of 3 of the Bali bombers (all brothers and teachers of the school). In March last year, Lamongan hit the news again after two sisters-in-law were deported from Turkey with their children after they tried to join ISIS in Syria.

The Lamongan network, with Poso as its training ground and centre of operations, hit the ISIS spotlight after Santoso, a former JI leader (who also spent time in the Philippines), was featured in an ISIS video. Santoso is the leader of Mujahidin Indonesia Timur (MIT) or the Mujahideen of Eastern Indonesia. He pledged loyalty to ISIS in July 2014. MIT was designated a terrorist organization by the US in September 2015. (READ: 4 things you need to know about ISIS in Indonesia)

Its MIT that’s been the target of police operations since last December. Indonesian police say MIT has received “logistical assistance” from ISIS. At least 16 terrorist suspects were arrested across Indonesia after police announced they had foiled an attack planned for the new year celebration. They’re all connected: Abu Jandal, one of ISIS’ 3 Indonesian commanders in Katibah Nusantara, is part of the Lamongan network and actively recruits fighters for ISIS from East Java. A former member of AQAP (al-Qaeda in the Arabian Peninsula) in Yemen, he left to join ISIS and has helped lay the travel routes for Indonesians wanting to join the jihad in Syria and Iraq. In 2013 and again in 2014, he has physically taken Indonesians from East Java to Syria. (There are an estimated 500 to 700 Indonesians, including women and children, who have joined ISIS).

Abu Jandal was in several “unofficial” ISIS videos that threatened to free 2 key ideological leaders from prison: Abu Bakar Ba’asyir and Aman Abdurrahman, who is Indonesia’s main translator for ISIS and even from prison, can command 200 men.

Abdurrahman has given spiritual guidance to Bahrun Naim, Santoso, and Abu Jandal, and heads Jamaah Ansharut Daulah (JAD), an umbrella organisation that unites extremist groups in Indonesia under ISIS.

Naim, according to Jakarta police chief Tito Karnavian, wants to pull together groups across Southeast Asia, including Indonesia, Malaysia and the Philippines.

“In order to get credit from ISIS, he needs to prove his leadership capabilities,” Tito told Rappler.

Now place all this within the context of a potential Southeast Asian rivalry.

Nearly a week before the Jakarta attacks, 4 groups in the southern Philippines united, formed a leadership shura, and selected their governor or commander, Isnilon Hapilon. The video included Malaysian commanders. (READ AND WATCH: ISIS to declare a province in Mindanao?)

After reaching this step, other groups have carried out mass casualty attacks to prove their capability and intent.

Gen. Tito Karnavian, Jakarta police chief and former head of counterterrorism task force Densus 88, talked about a rivalry for leadership, but it’s unclear whether it’s a rivalry among Indonesians – which would pit Bahrun Naim against Abu Jundal – or Southeast Asians – which pits Naim against Filipino Isnilon Hapilon.

What’s at stake? A new lease on life of a network that’s lost its global support and funding. The ability to inspire new recruits. A global stage to create larger ripples that ultimately come back to reshaping the jihadists’ home turf. The Bali bombings happened after the Afghan war veterans returned home and put what they learned in the training camps to use. What happens when the ISIS veterans from Syria and Iraq return home?

Jakarta’s attacks are only the tip of the iceberg – as Southeast Asia swings deeper into the fourth wave of Islamist terrorism. – Rappler.com