Jan 18, 2016 7:30 AM PHT
Agence France-Presse
Facebook Twitter Copy URL
Copied
(UPDATED) Clinton, Sanders, and former Maryland governor Martin O'Malley are aware that their performance – the final Democratic debate before the Iowa caucuses on February 1 – could have a crucial impact on who wins the state 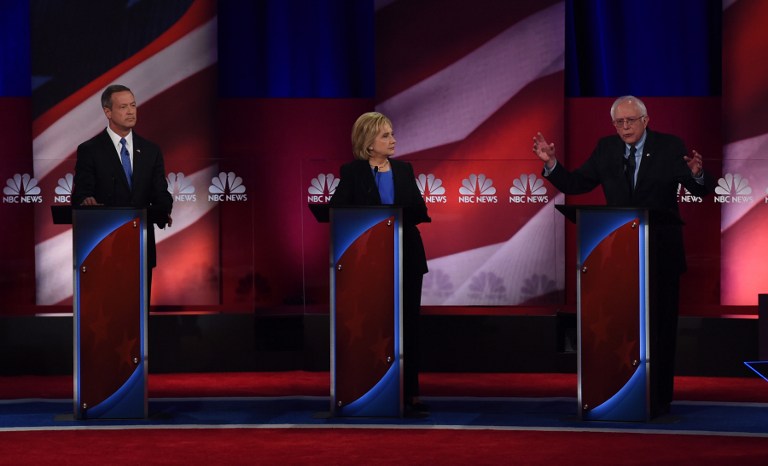 CHARLESTON, USA (UPDATED) – Democratic presidential candidates clashed Sunday, January 17 (Monday, January 18 in Manila) in their final debate before first votes are cast in Iowa, with Hillary Clinton presenting herself as the most qualified candidate as she fended off attacks by pugnacious rival Bernie Sanders.

The pair, along with ex-Maryland governor Martin O’Malley, took the stage in Charleston, South Carolina as frontrunner Clinton feels the heat from challenger Sanders in a tightening nomination race.

All 3 are aware that their performance could be the best opportunity to reshape the race ahead of Iowa, which votes two weeks from Monday.

Clinton raced out of the gate touting her vast experience as former secretary of state, senator and point-woman for her husband Bill Clinton’s efforts to reform health care, saying Americans need a president who can do “all aspects of the job” and signaling that her rivals were not up to the task.

“I understand that this is the hardest job in the world. I’m prepared and ready to take it on,” she said.

Clinton, whose campaign has been surprised by the resilience of what Sanders called his “political revolution,” presented herself as the candidate best qualified to “bring our country together” during polarizing times.

Sanders, who has drawn nearly even with Clinton in Iowa according to polls, sent shockwaves hours before the debate when he unveiled his “Medicare for All” proposal, which he said would save average American families thousands of dollars per year.

But the plan would raise taxes on Americans across the board and require a 6.2% health care payroll tax on businesses, while slapping taxpayers with a 2.2% “premium” based on income.

Sanders, an independent US senator who has described himself as a democratic socialist, said his plan would save $6 trillion over the next 10 years compared to the current system.

“To tear it up and start over again… I think is the wrong direction,” Clinton said at the debate broadcast by NBC News.

With the two main rivals increasingly locking horns on policy, Clinton criticized Sanders for his positions on gun control.

“He has voted with the NRA (National Rifle Association), with the gun lobby numerous times,” she said, highlighting his votes against legislation that mandated background checks for gun sales.

And she wryly congratulated the senator for having flip-flopped on a proposal that she has advanced to end gun makers’ immunity from lawsuits. In 2005 Sanders voted for legislation that gave gun manufacturers legal immunity.

“This should not be a political issue,” Sanders said, noting the tragedy that befell Charleston when a “crazed person” shot nine African Americans in a church last year.

“What we should be doing is working together.”

O’Malley has made little headway with voters despite considerable debate stage time. He squeezed into the conversation Sunday, offering an indictment of the Clinton political juggernaut by stressing that it was time for voters to “let go of the past and move forward.”

But while O’Malley was seen as an also-ran, it is Sanders’s success which has jostled team Clinton.

Sanders accused the former first lady of having cozied up to billionaires and said she would not be tough enough on Wall Street banks.

“We have an economy that’s rigged,” Sanders said as he drew a sharp contrast with Clinton.

“I don’t take money from big banks. I don’t get personal speaking fees from Goldman Sachs,” he said, noting that Clinton has accepted hundreds of thousands of dollars for addressing the bank.

Establishment Democrats are wary of a repeat of 2008, when Clinton led all rivals into the Iowa home stretch, only to lose the state to little-known senator Barack Obama, who pulled the rug out from under his rival and eventually won the nomination and the White House.

Clinton is again the presumptive favorite. But last year’s scandal about her use of private email while secretary of state has lingered, and her favorability ratings are lower than those of Sanders. – Timothy Clary, with Michael Mathes in Washington DC, AFP / Rappler.com