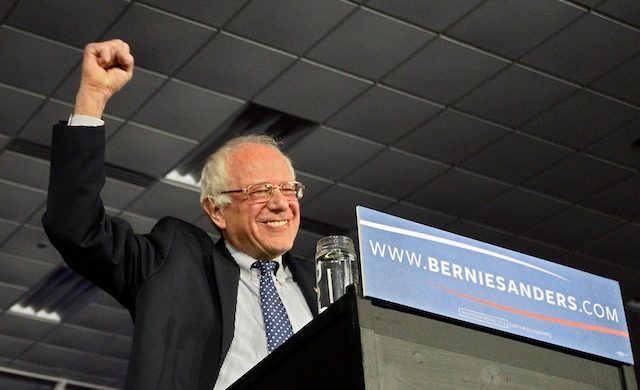 CONCORD, New Hampshire, USA (UPDATED) – Written off by his opponents as a wacky socialist, Bernie Sanders was long seen as the foil who would drag Hillary Clinton farther to the left, rather than a real White House contender.

But with his decisive win in New Hampshire’s Democratic presidential primary on Tuesday, February 9, the 74-year-old Sanders – the country’s longest-serving independent member of Congress – gave notice that his “political revolution” is for real.

An outsider like Donald Trump, albeit at the opposite end of the ideological spectrum, the self-styled democratic socialist may be the eldest contender in the White House race but he has done the most to inspire passionate support among young liberals.

“We harnessed the energy and the excitement that the Democratic party will need to succeed in November,” Sanders told adoring fans at his campaign headquarters on Tuesday, looking ahead to the general election.

Outwardly serious – even friends call him grumpy – the senator from Vermont has spent a lifetime in public office addressing income inequality and fumes that the top 0.1 percent of Americans owns as much wealth as the bottom 90 percent.

Bernie, as he is known to fans, calls inequality the great moral, economic and political issue of the times and demands campaign finance reform that would prevent billionaires from spending unlimited funds in propelling their candidates to the White House.

He has drawn thousands to his rallies, winning endorsements from Oscar winner Susan Sarandon and Ben &amp; Jerry’s ice cream, which concocted a new flavor, “Bernie’s Yearning,” mint covered in a thick chocolate, in his honor.

The catchy “Feel the Bern” has become the popular de facto campaign slogan.

Sanders admits to being taken aback by the extent to which his message has resonated in a Democratic race where Clinton is still expected to win the overall Democratic nomination.

He has run a progressive campaign calling for universal health care coverage, a $15 minimum wage, reining in Wall Street, free tuition at public universities, taxing the wealthy and pulling 27 million Americans out of poverty.

The big question, as with Trump, is whether Sanders can continue to transform his popularity among people who generally do not vote into turnout. On Tuesday, he succeeded.

Born in Brooklyn, New York on September 8, 1941 and brought up in a hard-working Jewish family that could never afford to move out of their small apartment, he has spoken of knowing firsthand the struggle for money.

His father was a Polish immigrant whose family was wiped out in the Holocaust. He attended a local school and a college, before transferring to the University of Chicago.

As a student, he became involved in the civil rights movement and took part in the March on Washington, where Martin Luther King Jr delivered his “I Have a Dream” speech in 1963.

After graduating, Sanders worked on an Israeli kibbutz and moved to Vermont, the state next to New Hampshire, where he worked as a carpenter and filmmaker.

In 1981, he was elected as mayor of Burlington, the state’s largest city, by a mere 10-vote margin and went on to win another three terms.

Under his administration, the city made strides in affordable housing, progressive taxation, environmental protection, child care and women’s rights.

In 1990, he was elected to the House of Representatives as an independent for Vermont, taking his fight against inequality to Congress.

After 16 years in the House, he was elected to the Senate and is serving his second term after winning re-election in 2012 with 71 percent of the vote.

In 2014, he worked with Republican Senator John McCain to pass legislation to make it easier for veterans to get medical care, beating the partisan gridlock that has paralyzed much of Washington life in recent years.

He registered as a Democrat last year and announced his presidential run.

Sanders has mainly steered clear of waging personal attacks on Clinton, including over the email scandal that dogged her stint as secretary of state, or her husband’s extra-marital liaisons.

“The American people are sick and tired of hearing about your damn emails,” he said during a televised debate in October, while acknowledging it was not good politics to let the former first lady off the hook.

But in a debate last week, Clinton accused him of seeking unfairly to discredit her by suggesting she was beholden to powerful donors, calling on him and his campaign team to “end the artful smear.”

Nevertheless, Democrats disillusioned with the Clintons and Americans asking why they work so hard and yet lag so far behind other industrialized nations in having the right to paid leave and health care have flocked to Team Sanders.

“In countries around the world, in Scandinavia and in Germany, the ideas that I am talking about are not radical ideas,” Sanders explained in Iowa, where he lost to Clinton by the thinnest of margins.

“We cannot continue to have a government dominated by the billionaire class and a Congress that continues to work for the interest of the people on top while ignoring working families.”

Sanders lives in Burlington with his second wife Jane. Together, the couple have four children and seven grandchildren. – Jennie Matthew, AFP / Rappler.com