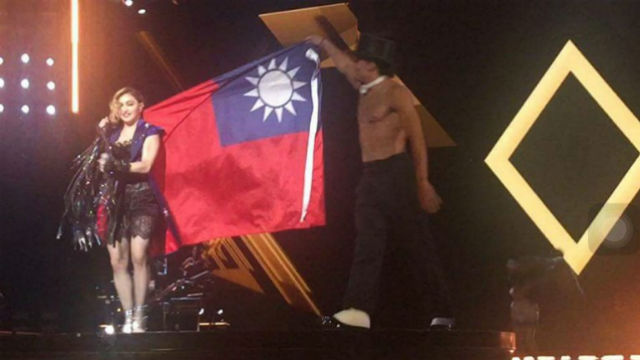 TAIPEI, Taiwan – Pop diva Madonna has waded into the war of words over Taiwanese identity after draping herself in the island’s flag, sparking ire in China, where any suggestion of independence is scorned.

Taiwan’s Apple Daily and Liberty Times newspapers ran photos of Madonna with the flag over her shoulders as she sang an encore Thursday, February 4 on the Taipei leg of her global Rebel Heart Tour.

The move was greeted enthusiastically by many on Taiwanese Internet forums, who saw it as a boost to their quest to protect the island’s sovereignty in the face of increased influence from Beijing.

“Is Taiwan a country? I am laughing to death… you are just a region,” said one.

“Madonna draped the flag and you think you are going to be recognized by the UN? So funny,” said another, referring to Taiwan’s lack of international status.

Taiwan has been self-ruling since splitting from China in 1949 following a civil war, but Beijing still views it as part of its territory awaiting reunification.

As Beijing’s influence has grown globally, Taiwan has hemorrhaged allies, losing its place at the UN to Beijing and is now only recognized by 22 countries.

China supporters also voiced their anger on Madonna’s Instagram account, responding to a picture which showed her face superimposed on a blue sun motif similar to the white sun on Taiwan’s flag, attracting 2,000 messages.

“Shut up, people of Taiwan province of China,” one message read.

“Madonna was just creating a talking point and some Taiwanese people thought she was speaking up for Taiwan independence? So funny,” said another.

“Someone holds the flag and you are barking like a dog. So low class. If you like China so much, go back to use your weibo,” one comment read.

The Asian leg of the Rebel Heart Tour includes dates in Hong Kong and Macau, but not mainland China.

There was no immediate comment from local promoters or Madonna’s representatives following Thursday’s concert.

Last year, US singer-songwriter Katy Perry caused a stir in both Taiwan and China when she appeared on stage in Taipei draped in a Taiwan flag, while donning a gold dress adorned with sunflowers – a symbol of anti-China student protests in Taiwan in 2014.

Several Taiwanese entertainers have also got into trouble for waving the Taiwan flag abroad.

Last month, K-pop singer Chou Tzu-yu, 16, was forced to apologize for waving the flag in an Internet broadcast, which stoked online anger in China and accusations that she was a pro-independence advocate.

Her video apology went viral on the day of Taiwan’s presidential and legislative elections in January and some analysts believed may have cost the ruling Beijing-friendly Kuomintang (KMT) party hundreds of thousands of votes.

The traditionally pro-independence main opposition Democratic Progressive Party (DPP) won by a landslide, with the KMT’s rapprochement with Beijing a major factor in its defeat. – Amber Wang, AFP/Rappler.com