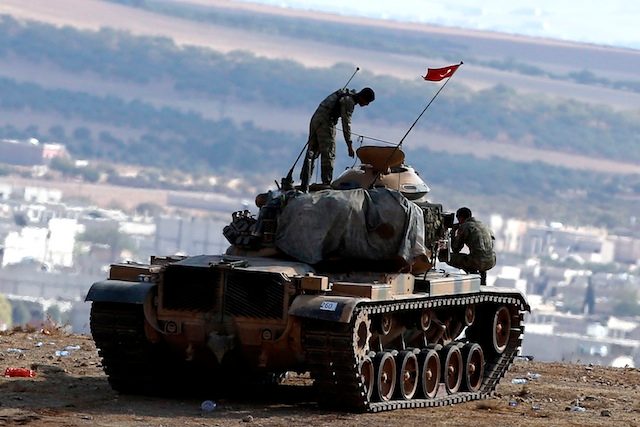 RIYADH, Saudi Arabia – With rebel forces facing the prospect of a crushing defeat by Syria’s Russian-backed regime, their allies Saudi Arabia and Turkey may send in limited numbers of ground troops, analysts say.

Riyadh on Thursday left open the possibility of deploying soldiers, saying it would “contribute positively” if the United States-led coalition against the Islamic State (IS) jihadist group in Syria decides on ground action.

The fate of Saudi-backed Syrian armed opposition groups fighting to topple President Bashar al-Assad is also a major concern for the kingdom.

“I think Saudi Arabia is desperate to do something in Syria,” said Andreas Krieg, of the Department of Defence Studies at King’s College London.

Krieg said the “moderate” opposition is in danger of being routed if Aleppo falls to the regime, whose forces have closed in on Syria’s second city, backed by intense Russian air strikes.

“This is a problem for Saudi and Qatar as they have massively invested into Syria via the moderate opposition as their surrogate on the ground,” said Krieg, who also serves as a consultant to the Qatari armed forces.

Russia, which along with Saudi Arabia’s regional rival Iran is a major ally of Assad, meanwhile has accused Turkey of “preparations for an armed invasion” of Syria.

But Krieg said Erdogan’s policy in Syria has achieved nothing so far.

“Turkey and Saudi need to turn this war around. So any Saudi engagement would be in cooperation with Doha and Ankara,” he added.

Aleppo province is among the main strongholds of Syria’s armed opposition, which is facing possibly its worst moment since the beginning of the nearly 5-year war, at a time when peace efforts have stalled.

The Saudi-backed opposition umbrella group, the High Negotiations Committee, says it will not return to peace talks which recently collapsed in Geneva unless its humanitarian demands are met. (READ: UN tries to get Syria peace talks back on track)

“The Saudis believe that the chance of a peaceful solution for the Syrian crisis is very limited,” said Mustafa Alani, of the independent Gulf Research Centre.

“They don’t see that there is a real pressure on the regime to give major concessions…They think eventually it will have to end in the battlefield,” Alani said.

“Turkey is enthusiastic about this option (of sending ground troops) since the Russians started their air operation and tried to push Turkey outside the equation,” he added.

Alani said the Saudis are serious about committing troops “as part of a coalition, especially if the Turkish forces are going to be involved.”

But he and other analysts said Saudi involvement would be limited, given its leadership of a separate Arab coalition fighting in Yemen for almost a year and guarding the kingdom’s southern border from attacks by Iran-backed Yemeni rebels.

“They are overstretched. But in principle I think they will not hesitate to send a certain number of their fighters to fight in Syria,” Alani said, adding that this would probably include Saudi special forces.

Turkey and Saudi already belong to a US-led coalition which officially has 65 members. It has been bombing IS targets in Syria and Iraq, as well as training local forces to fight the extremists.

Krieg said that with Saudi and other Gulf kingdoms “bogged down” in Yemen, he could only foresee a possible expansion of “train and equip” missions involving Gulf special forces to help rebels in Syria.

“Saudi and Qatar have already networks on the ground,” he said, viewing Doha as a link between Riyadh and Ankara as relations improve.

The United States has been calling on coalition members to do more.

In November, the United Arab Emirates said it was also ready to commit ground troops against jihadists in Syria.

Jane Kinninmont, senior research fellow at London’s Chatham House, said Saudi Arabia is more interested in the war in Yemen than the struggle against IS.

“But what you might see is small numbers of ground troops and perhaps also special forces which would be there partly to make a symbolic point that Saudi Arabia is supporting the fight against ISIS,” she said, using another acronym for the Sunni extremists.

She declared herself “a bit sceptical” about potential Turkish army involvement in Syria, “but we might see them having some kind of interest in containing Kurdish influence.” – Rappler.com