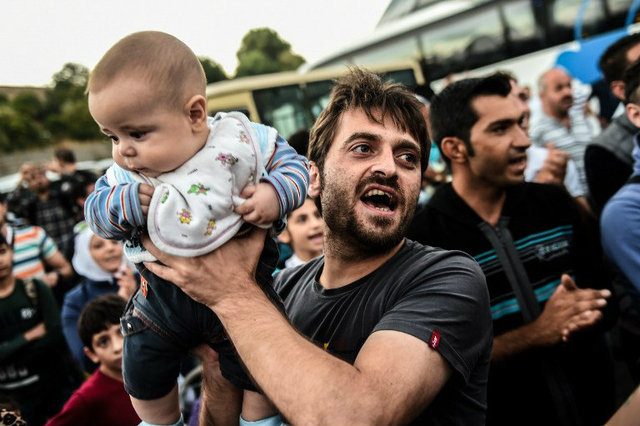 Facebook Twitter Copy URL
Copied
(UPDATED) 'These people have nowhere else to go. Either they will die beneath the bombings... or we will open our borders'

ONCUPINAR, Turkey (2nd UPDATE) – Turkey said on Sunday, February 7, it would not abandon thousands of Syrians stranded on its border after fleeing a major Russian-backed regime offensive, as aid agencies warned of a “desperate” situation.

Tens of thousands of people, including many women and children, have been uprooted as pro-government forces backed by intense Russian anti-rebel air strikes advance near Syria’s second city Aleppo.

“But in the end, these people have nowhere else to go. Either they will die beneath the bombings… or we will open our borders.”

“We are not in a position to tell them not to come. If we do, we would be abandoning them to their deaths.”

They waited desperately for the moment the gate will open, as Turkish aid trucks delivered food inside Syria.

President Recep Tayyip Erdogan has said Turkey was ready to open its gates to Syrian refugees “if necessary”.

Carrying what few belongings they still have, Syrians queued in the cold and rain in squalid camps near the border, waiting for tents being distributed by aid agencies.

Others are reportedly sleeping in the open, in fields and on roads.

“From what MSF can see the situation in Azaz district is desperate, with ongoing fighting and tens of thousands of people displaced,” said Muskilda Zancada, head of the group’s Syria mission.

“We are still conducting assessments but so far have seen problems with lack of space to accommodate people, and insufficient water and sanitation in many areas.”

The agency said three MSF-supported hospitals had been bombed, although the extent of the damage was unknown because their proximity to the front lines made access too difficult.

More than 260,000 people have died in Syria’s nearly 5-year-old conflict, more than half the population has been displaced and hundreds of thousands have tried to reach Europe, sometimes paying with their lives making the risky Mediterranean Sea crossing.

The European Union has said Ankara was internationally obliged to keep its frontiers open to refugees, while also pressing the Turkish government to help stem the flow of migrants to Europe.

A Turkish official said the Oncupinar crossing was “open for emergency situations”.

“Seven injured were taken to Turkey on Friday (February 5) and one on Saturday (February 6) for treatment at Turkish hospitals,” he said.

Syrian government forces have closed in on Aleppo city in their most significant advance since Russia intervened in September in support of President Bashar al-Assad’s government.

Regime troops advanced Sunday towards the rebel town of Tal Rifaat, around 20 kilometers (12 miles) from the Turkish frontier, a monitoring group said.

It is one of the last rebel strongholds in northern Aleppo province and government troops are just 7 kilometers away, the Britain-based Syrian Observatory for Human Rights said.

Syria’s mainstream rebels are now threatened with collapse after the regime severed their main supply line to Aleppo city.

Opposition forces and roughly 350,000 civilians inside rebel-held parts of the city face the risk of a government siege, a tactic that has been employed to devastating effect against other former rebel bastions.

On Sunday an aid convoy entered the regime-besieged town of Moadamiyat al-Sham near Damascus, in a new joint operation organized by the Red Cross and Red Crescent.

International Committee of the Red Cross spokesman Pawel Krzysiek said 700 food parcels and 700 hygiene kits were to be distributed to 700 families, or roughly 3,500 people.

“We are planning to continue the aid in the next days,” he said. Last week another aid convoy brought aid to the town which has been under government siege since the start of 2013.

Also near Damascus, 35 pro-regime militiamen and soldiers were killed in a rebel ambush at dawn in the opposition stronghold of Eastern Ghouta.

Top diplomats from countries trying to resolve the conflict are set to meet again on February 11 after the collapse of peace talks last week.

Pope Francis urged the international community “to spare no effort to urgently bring parties back to the negotiating table”, and appealed for generosity to ensure the “survival and dignity” of displaced Syrians.

And the United Arab Emirates, echoing Saudi Arabia, said it was in favour of sending troops to Syria but stressed that such an operation should be led by the United States, which is already spearheading a campaign of air strikes against the jihadists. – Fulya Ozerkan with Rouba El Husseini in Beirut, Lebanon, AFP / Rappler.com