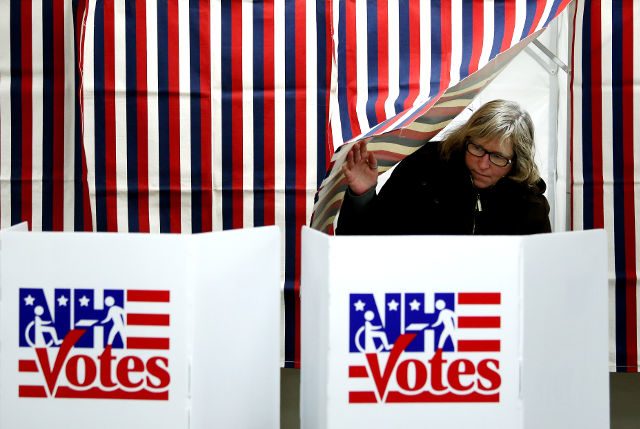 Facebook Twitter Copy URL
Copied
(UPDATED) New Hampshire's primaries, volatile as they are this year, are known for their surprises, leaving several candidates hopeful that they can outperform the narrative established by months of polling

Once every 4 years, the nation’s eyes focus like laser beams on little, largely rural New Hampshire, which holds the first state primaries after the Iowa caucuses kick off the US presidential nomination process.

The proud northeastern state, home to just 1.3 million people, sets the tone for the primaries – and could whittle down a crowded Republican field as the arch-conservative Senator Ted Cruz and more mainstream candidates led by Senator Marco Rubio battle for second place behind frontrunner Trump.

But New Hampshire’s primaries, volatile as they are this year, are known for their surprises, leaving several candidates hopeful that they can outperform the narrative established by months of polling.

In the picturesque town of Canterbury, population 2,000-3,000, sub-freezing temperatures and a thick coat of snow on the ground greeted early-risers who stopped by the town hall to vote before heading to work.

David Emerson, a wood worker set up outside with a Sanders poster, said he planned to stay all day.

“He’s the only one that’s worth supporting. Hillary makes it clear it’s the same old, same old” with her, Emerson said.

“Bernie talks about all the things that need to be done. Hopefully he’s really creating a movement.”

New Hampshire punches well above its weight when it comes to presidential politics, as it culls weak White House hopefuls.

For the past 60 years or so, most of the candidates who ended up winning the White House won their party’s primary in the so-called Granite State.

But tellingly, the last 3 presidents – Barack Obama, George W. Bush and Bill Clinton – were all elected despite losing the New Hampshire primary.

A RealClearPolitics poll average shows Sanders – who has called for nothing short of a “political revolution” – leading 54.5% to 41.2% for Clinton in the state.

Trump leads rival Republicans with 31.2% – with no other candidate above 15% on average.

But everything remains in play in New Hampshire due to a high number of registered independents, who can choose to vote in either party, along with up to 30% of voters still undecided until recently.

Go out and vote

“Trump!” laughed Karen Carone, a caregiver from Loudon, when asked who she voted for.

“He seems to be speaking for the silent majority,” agreed auto mechanic Chris Skora after voting for the real estate magnate.

“A lot of us feel that way and it seems like in this day and age, we can’t say these things with the PC police all around.”

The New York billionaire has energized broad swaths of blue-collar Americans, angry about economic difficulties and frustrated at what they see as their country losing its global stature.

But Trump needs to turn his poll lead into a convincing win in New Hampshire if he is to recover from the embarrassment of finishing second behind Cruz in Iowa.

The rest of the Republican pack has been fighting it out, hoping a strong showing can reinvigorate them for South Carolina and Nevada, the next stops on the long campaign trail.

Several candidates popped in at polling locations to greet voters. But with electioneering barred there, some took to Twitter to make their final pitch.

Bush, the early favorite who last year slipped to the middle of the pack, tweeted he was wrapping up in New Hampshire “the same way I began: giving it my all, speaking to every voter and being true to what I believe.”

Rubio is hoping to match or better his third-place Iowa finish, despite taking a drubbing in Saturday’s (February 6) debate when Christie eviscerated the first-term Florida senator for robotically repeating the same talking points.

Driving the point home, several protesters in mocking robot costumes were waiting for Rubio as he set out to meet voters Tuesday in Manchester.

Run for her money

On the Democratic front, Clinton is looking to confound polls that predict a large victory for her insurgent challenger Sanders, who represents neighboring Vermont in the US Senate and is big on erasing economic inequality.

“You know, I just love the way New Hampshire does this,” Clinton said as she and daughter Chelsea greeted cheering, sign-waving campaign volunteers at a school in Manchester, the state’s largest city.

“We’re going to keep working literally until the last vote is cast and counted and we’re going to go from there,” Clinton said.

Clinton won Iowa by a hair, and remains the overall favorite to win the Democratic nomination. But Sanders’ strong performance shows his campaign can give the former secretary of state a run for her money deep into election season. – Jennie Matthew, AFP / Rappler.com