WASHINGTON DC, USA (6th UPDATE) – Impulsive, immoderate and politically untested, Donald Trump did not exactly seem to fit the profile of a candidate for the most powerful job in the world.

But with his boundless energy and outsized ego, the 70-year-old billionaire Republican defied all predictions, defeating the far more experienced Hillary Clinton to win the White House.

On Tuesday, November 8, Trump had promised a “Brexit plus plus plus” and voters gave it to him, denying Clinton her place in history as the first woman president in the Oval Office and sending the country – and world markets – into uncertainty.

Delivering corrosive speeches that played to the frustrations and insecurities of Americans in an evolving world, the Manhattan real estate mogul has nevertheless become the voice of change for millions of them.

And he has blown up a Republican Party still struggling to understand his supporters – and still baffled by how, or whether, to dance with Tornado Trump.

Before launching his campaign in June 2015, Trump was known mainly for his immense fortune; for the luxury hotels, golf courses and casinos bearing his name; for the tabloid-worthy details of his divorces; and for being the star host of the reality TV show “The Apprentice.”

All of this made his a familiar face in American households. But he has also shown himself to be a formidable political animal, and an unlikely populist hero with his promise to “Make America Great Again.”

In the final days of the campaign, Trump repeatedly pledged to “drain the swamp” in Washington of its corrupt political elites and put “America first.”

Trump is not afraid to say anything – really anything at all.

He hits his opponents where it hurts. 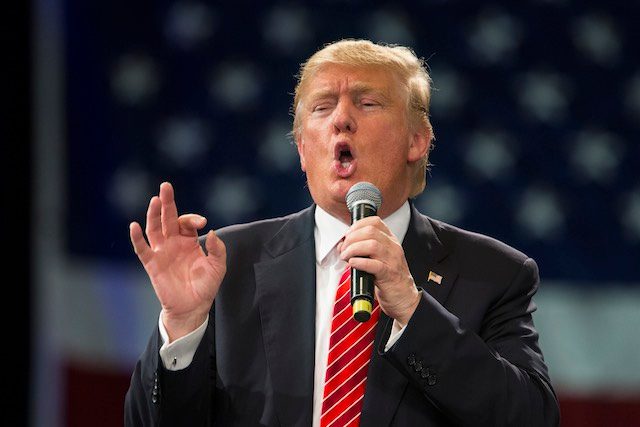 He has decried a “rigged” system, denounces political officials as “corrupt” and says “the media poisons the mind of the American voter.”

During the campaign, he offered simple solutions for the most complex of problems – he said he would build a wall along the Mexican border, paid for by Mexico, to stop illegal immigration.

He vowed to expel the 11 million undocumented immigrants believed to be living in America.

And he insisted he could bring jobs back to America by renegotiating international trade deals.

To prevent attacks on American soil, he said he would ban from the United States immigrants from countries with “a proven history of terrorism,” after first saying he would ban all Muslims.

Even when he contradicted himself and was not entirely conversant with every policy issue, his supporters still believed in him.

In their eyes, Trump – who spent more than $50 million of his own money on his campaign – seems incorruptible, particularly when compared to Clinton, whose close Wall Street ties have earned their hatred.

He insulted women, Muslims and Hispanics on the campaign trail, while alienating black voters.

Ever the provocateur, he had refused to say that he would recognize the result of the presidential election no matter what.

But he also lives what for many of his supporters would be a dream, a life of luxury with a glamorous family: his wife Melania, a former model, now 46, is raising their 10-year-old son Barron far from the spotlights.

His adult children Ivanka, Don Jr, Eric and Tiffany all took part in his unlikely campaign.

Trump lives in a palatial three-story penthouse – a veritable mini-Versailles – atop Trump Tower in New York. He travels in his private, gilded Boeing 757, which was in the background at his airport rallies around the country.

With his trademark wispy, unruly blond hair and his impeccable suits, he both fascinates and horrifies.

He lies so often, and on so many subjects, that fact-checkers have had a hard time keeping up. When a dozen women came forward in October to accuse him of forcibly kissing or inappropriately touching them, he accused them all of lying and threatened to sue them.

Trump is not exactly an ideologue. He was a Democrat until 1987, then a Republican until 1999, then a member of the Reform Party up until 2001, then a Democrat for eight years before finally again becoming a Republican.

Born in New York – the fourth of 5 children of a real estate promoter – he had such a volcanic temper that at age 13, his parents sent him to a military school in hopes the regimented life there would have a calming influence.

After studying economics in college, he joined the family business. His father helped him out with what Trump has called a “small loan of a million dollars.”

The younger Trump took control of the family business in 1971. But while his father had built apartments for middle class New Yorkers, Donald preferred luxury high-rise hotels, glittering casinos and manicured golf courses, from Manhattan to Mumbai.

Through his career, Trump has filed or been the target of dozens of civil suits tied to his business dealings.

He has refused to divulge his US income tax returns – defying a decades-old tradition among White House hopefuls – and grudgingly acknowledged that he had paid no federal taxes for years, having declared a colossal loss of $916 million in 1995.

“That makes me smart,” he said.

Trump has said he has “phenomenal” plans for his first 100 days as president, plans he promises will kickstart change and boost growth.

Until Tuesday, no one really believed that Trump would triumph, especially as Candidate Trump sometimes ended up being his own worst enemy, regularly shooting himself in the foot with sensational declarations or with late-night tweets

But in the end, he proved his naysayers wrong. – Rappler.com