A woman tells her story: ‘Why did you cut my clitoris?’ 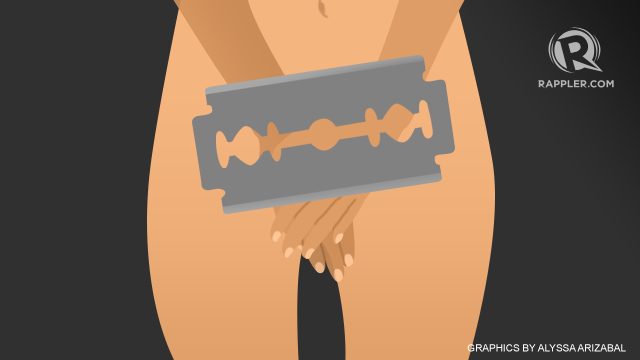 Facebook Twitter Copy URL
Copied
Female genital mutilation is a widespread practice globally. One woman tells Rappler her experience and how she has never achieved an orgasm because of her circumcision.

JAKARTA, Indonesia – When Mary* was in elementary school, a male classmate was circumcised.

He received gifts from friends as a form of congratulations, prompting Mary to tell her mother when she got home, “I should get circumcised, Mom. I can get a lot of money.”

Her mother’s response was not what she expected.

“When you were a newborn.”

Mary recalls walking away from that conversation thinking everyone got the procedure done – females at birth, males perhaps when they were a little older.

But it wasn’t until later that Mary understood the meaning of the conversation she had with her mother.

Mary is one of 200 million women worldwide who have undergone female genital mutilation (FGM). The number, according to a new report from UNICEF, is 70 million higher than what was reported in 2014.

While the top 10 countries with the highest prevalence of FGM from 2004-2015 is in Africa, the data shows that the increase is partly due to population growth and new data collected in Indonesia.

Indonesia, with its population of 250 million people, is one of 3 countries that account for half of all FGM victims in the world, along with Egypt and Ethiopia.

It was in junior high school when Mary first realized that female circumcision was not a regular practice.

In conversation with her girl friends, Mary learned that not everyone had undergone the procedure as a baby – even if all of them were Muslim.

First, she started to argue about how it was an obligation in their religion, as she had always thought it was, but becoming more curious, decided to read more on the matter.

She started reading books on sexual and reproductive health, studying photos of vaginas. She learned about the clitoris – and realized she didn’t have one.

“I read the book and learned that the practice was one of many ways to control women. One way was through circumcision,” she told Rappler.

According to UNICEF, FGM includes all procedures “that involve altering or injuring the female genitalia for non-medical reasons.” It is a practice recognized internationally as a violation of human rights of girls and women, with February 6 being the International Day of Zero Tolerance for Female Genital Mutilation.

Even within Indonesia, the practice differs in various regions.

Secretary General of the Women’s Coalition Dian Kartika Sari said the culture of female circumcision in each region is different.

“There is not just one cut,” she told Rappler on Friday, January 8.

In the island of Madura for example, the clitoris is cut. In other regions, the feeling on the clitoris is “killed” by slicing off a small part, but it is not completely cut off. He also said it is still practiced in some urban areas.

In 2010, the Ministry of Health released a regulation that authorized certain medical professionals, such as doctors, midwives and nurses, to perform circumcision on female patients. The technical details of circumcision was even mentioned in the regulations: “Make a scratch on the skin that covers the front of the clitoris by using the tip of a disposable sterile needle, measuring 20G-22G of the mucosa toward the skin without injuring the clitoris” said article 4, paragraph 2.

The regulation was repealed by the Deputy Minister of Health Ali Ghufron Mukti soon after.

Because while FGM is widely practiced in Indonesia, many others in the country do denounce FGM as a violation of rights. According to UNICEF, FGM violates women’s and girls’ “right to health, security and physical integrity, their right to be free from torture and cruel, inhuman or degrading treatment, and their right to life when the procedure results in death.”

For Mary, one of the rights taken from her was her sexual rights – at 33, Mary has never experienced an orgasm in her life.

She was first sexually active in college and is now married. But without a clitoris, Mary said she has never experienced an orgasm, a feeling her friends describe as “much like flying.”

“I can never relate when they talk about it,” she said. “It makes me sad.”

Mary said the books she read said women find it difficult to enjoy sex without a clitoris, admitting that she is unsure if her problem is psychological or physical.

Mary said the problem has caused stress for not just herself but for her husband, who for 5 years tried various ways to help her orgasm – but to no avail. She said she views sex now, as “just a waste of time,” describing her sex as “mediocre.”

There are two main reasons parents have their daughters undergo FGM in Indonesia: the first is religious, as many Muslims here believe that female circumcision is an Islamic requirement, or at the very least, is highly recommended in Islam. This is despite the fact that no formal links between Islam and FGM exist, and that no Islamic laws or Quranic verses speak of FGM, let alone make it a requirement.

Even Fatayat NU, the women’s division of Nahdlatul Ulama, Indonesia’s largest Islamic organization, have acknowledged that FGM is not mentioned in the Quran and is simply a cultural product.

The second reason FGM is popular in Indonesia is because it is believed to reduce women’s sexual desire and libido.

Female genital cutting is believed by some to be one way of achieving this. Without it, it is thought, girls will become sexually aggressive and will actively pursue “undesirable” sexual relationships.

Previously furious at her parents who asked that doctors circumcise her and her sister upon birth, Mary has since accepted her fate – and the fact that the effects of FGM is something she will have to live with for the rest of her life.

Mary said her parents were apologetic when she first confronted them about it, saying she was born in an Islamic hospital where it was common practice. Her parents, she told Rappler, didn’t know better.

UNICEF data shows Mary’s experience is not that unique. Data shows that parents are the ones who ask for circumcision for their children the most, followed by religious leaders, relatives, and community leaders.

Even today, many in Indonesia think FGM is still a necessity. Sari said many community leaders still preach FGM which is one reason why the practice still exists in Indonesia. It is also still a widespread myth that FGM has health benefits.

However there is no evidence that FGM affects cleanliness or vaginal health. Claims that urine and genital secretions accumulate and fester in the vulva, vagina or urethra have no medical backing. FGM does not reduce chances of urinary tract infections or infections of the reproductive system. Instead, data shows FGM causes risks to health.

Research reveals that FGM is carried out mostly on young girls between infancy and age 15. The procedure can cause severe bleeding and health issues like cysts, infections, infertility and complications in childbirth, with the increased risk of newborn deaths.

Mary, who now understands that FGM has had zero positive impact on her life, now advocates against the practice. She tells colleagues and other women to avoid the practice in their daughters.

“Never again. Do not let anyone else’s daughters be circumcised,” she said. – Rappler.com/ with reports from Febriana Firdaus and Kate Walton for Magdalene

*Name has been changed for individual’s protection