Facebook Twitter Copy URL
Copied
In a joint statement, Obama and the 10 ASEAN leaders demand the 'peaceful resolution' of a myriad of competing territorial claims over islands, atolls and reefs in the South China Sea

“We discussed the need for tangible steps in the South China Sea to lower tensions,” Obama said after the meeting, calling for “a halt to further reclamation, new construction and militarization of disputed areas.”

In a joint statement, Obama and the 10 ASEAN leaders demanded the “peaceful resolution” of a myriad of competing territorial claims over islands, atolls and reefs.

Obama has tried to muster an informal coalition of Pacific allies to demand that Beijing respect the rule of law, hoping that China will want to avoid being painted as a regional bully.

The next showdown could come when the UN’s Permanent Court of Arbitration decides in April or May whether China’s claim to a vast expanse of sea inside a “nine-dash line” has legal merit.

Leaders discussed a collective US-ASEAN endorsement of the court’s verdict – whatever the outcome – which would heap pressure on China, which refuses to recognize the court.

“Freedom of navigation must be upheld, and lawful commerce should not be impeded,” Obama said.

“The United States will continue to fly, sail and operate wherever international law allows, and we will support the right of all countries to do the same.”

The White House had lauded the summit, and the prestigious venue, as an opportunity to champion Obama’s “pivot to Asia” and ASEAN’s growing importance, before the president leaves the White House in January 2017.

“As president, I’ve insisted that even as the United States confronts urgent threats around the world, our foreign policy also has to seize on new opportunities. And few regions present more opportunity in the 21st century than the Asia-Pacific,” Obama said.

“That’s why, early in my presidency, I decided that the United States, as a Pacific nation, would rebalance our foreign policy and play a larger and long-term role in the Asia-Pacific.”

Obama announced a package of measures designed to boost Southeast Asian economies, betting that the fast-growing region can be an ever more important trade partner.

The plan will establish three economic offices – in Jakarta, Bangkok and Singapore – to boost the US government’s “economic engagement with ASEAN institutions,” officials said. 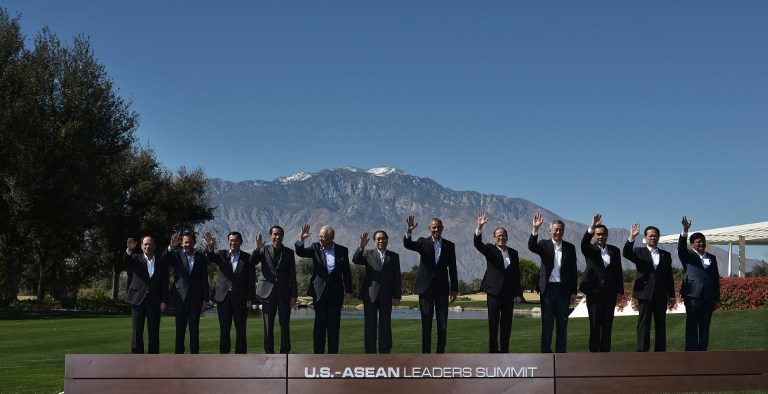 The summit came as ASEAN and US officials report increasingly strong pushback from Beijing, which is using diplomatic and economic muscle to weaken criticism.

Officials say Cambodia and Laos – two ASEAN countries that have no claims in the South China Sea – are under particular pressure to break ranks.

Those countries are also the destination for large flows of Chinese investment.

“The message is ‘fall in line, or else,'” said one Southeast Asian diplomat. “China has leverage.”

But some see signs that pressure is beginning to backfire – forcing ASEAN countries to turn further toward the United States. That is something Obama hoped to capitalize on at Sunnylands.

Myanmar’s outgoing leader Thein Sein was not at the summit.

He decided to remain at home as talks inside the regime intensify over whether to change the constitution to allow Aung San Suu Kyi to become president.

In another reminder of the difficulties in bolstering the rule of law in Southeast Asia, Obama called for a return to civilian rule in Thailand, where the military seized power in 2014.

At home, Obama’s latest effort to champion his pivot was overshadowed by the death of Supreme Court Justice Antonin Scalia.

But the White House will hoped to send a message to the region that Washington will remain engaged.

“I’m confident that whoever the next president may be will build on the foundation that we’ve laid, because there’s strong, sustained bipartisan support for American engagement in the Asia-Pacific region,” Obama said.

Presidential trips to Vietnam and Laos are expected later this year to reinforce the point. – Andrew Beatty, AFP / Rappler.com