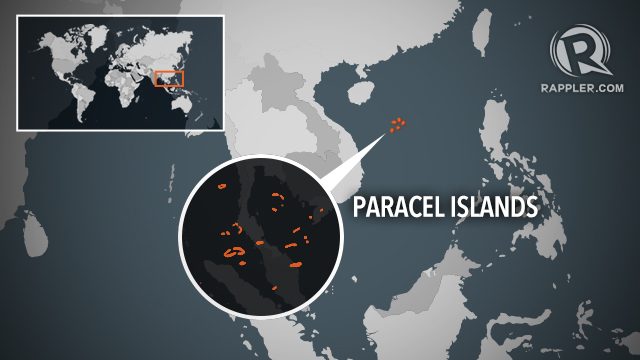 BEIJING, China – China confirmed that it has weapons on a disputed island in the South China Sea, state media said Thursday, February 18, as US Secretary of State John Kerry slammed Beijing for “militarization” of the strategically vital region.

The US and Taiwan both said China had deployed missiles to Woody Island, part of the Paracels chain, after Fox News reported the surface-to-air weapons had arrived there in the past week.

Beijing claims all of the Paracels, though Hanoi and Taipei have overlapping claims. China seized several islands from South Vietnam in a brief, bloody battle towards the end of the Vietnam War.

China’s Ministry of Defense confirmed that “China has deployed weapons on the island for a long time”, reported the Global Times newspaper, which has close ties to the ruling Communist party.

It did not specify which weapons were on the island.

But it attempted to downplay the deployment, saying recent reports were an example of Western media playing “the same old tune” about a “China threat”, the newspaper cited the ministry’s news office as saying.

“China has the fair and legal right to deploy defense facilities within the boundaries of its own territory,” the report added.

Tensions in the sea – through which one-third of the world’s oil passes – have mounted in recent months since China transformed contested reefs in the Spratly islands further south into artificial islands capable of supporting military facilities.

Washington says Beijing’s actions threaten free passage in a strategically vital area and has sent warships close to the disputed islands to assert freedom of navigation, raising fears of escalation.

“There is every evidence, every day, that there has been an increase of militarization of one kind or another,” Kerry told reporters in Washington on Wednesday.

Beijing meanwhile has insisted it has the right to build “self-defense” systems in the region.

A Thursday editorial in the Global Times argued that the US has “injected the most military elements in the region”.

If China has in fact placed surface to air missiles on the island, they might make “jet fighters from the US… feel uneasy when making provocative flights in the region. To us, that’s a proper result.” – Rappler.com