Dutch to establish spot from which MH17 missile was fired soon 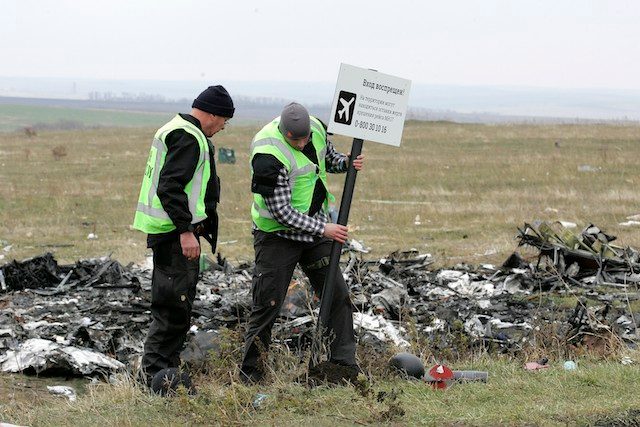 THE HAGUE, The Netherlands – Dutch and international criminal investigators will “within months” establish the spot from where the missile that downed Malaysia Airlines flight MH17 was fired, prosecutors said Friday, February 19.

A joint investigations team “expects to deliver judicial proof” of what type of BUK rocked was used “as well as pinpoint the position from where MH17 was shot down, before the second half of this year,” chief investigator Fred Westerbeke said.

All 298 passengers and crew – the majority of them Dutch – died when the plane was shot down with a Russian-made BUK anti-aircraft missile over war-torn eastern Ukraine on July 17, 2014.

Officials with the Dutch Safety Board (OVV) concluded last year in their investigation that the Boeing 777 was hit by a BUK fired from rebel-held territory, but did not give precise details nor definitively say who was responsible.

A separate criminal investigation is underway by a Dutch-led investigations team which also includes officials from Australia, Belgium, Malaysia and Ukraine.

In a letter to relatives published by Dutch media on Friday, Westerbeke said there were no film or video images of the actual missile launch.

“There are also no satellite images as a result of cloud cover” on the day over the area in war-ravaged eastern Ukraine, the Dutch Public Prosecution services officer told victims’ families.

Relatives last month urged the Dutch government to launch a global campaign to obtain primary radar images which may help pinpoint who fired the missile.

But Westerbeke wrote that Ukraine did not have the data and that investigators were still “in talks” with Moscow for their primary radar images, while the United States has handed over its radar data.

Investigators “are looking in which form the confidential American information can be used in a criminal investigation,” said Westerbeke.

Russian aviation authorities earlier this month told victims’ families in a separate letter that they had handed over primary radar data to the OVV and “still keeps the data and is ready to re-submit it to relevant authorized organizations.”

It took years to prosecute two suspects and sentence a single man involved in the bombing of Pan Am flight 103, which crashed over the Scottish town in December 1988, killing 259 passengers and crew onboard and 11 people on the ground.

There were two options for the prosecution and sentencing of those responsible, said Westerbeke: either on a national level by one of the countries investigating the incident, or by setting up an international tribunal.

This decision will eventually be determined by the criminal probe’s results.

The results will “clarify where the suspects live, what nationality they have and where they could best be prosecuted,” Westerbeke said.

Relatives of the MH17 disaster are to be further briefed on Westerbeke’s letter a meeting early next month. – Rappler.com