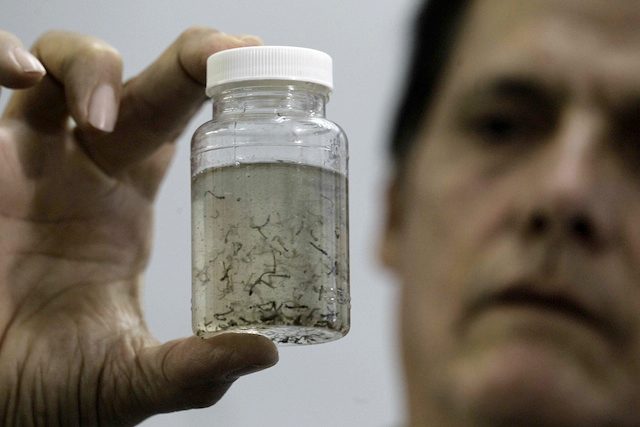 Facebook Twitter Copy URL
Copied
Health authorities project that more than 600,000 people will be infected with the Zika virus this year in Colombia

The latest count, based on data reported as of February 13, reflects an increase of 5,456 cases of the mosquito-borne virus in the last week for which data is available.

The rapid spread of the virus has raised alarms in Latin America because it has been tentatively linked to a serious birth defect known as microcephaly in babies born to women who became infected while pregnant.

Microcephaly is an irreversible condition in which a baby is born with an abnormally small head and brain.

The Institute said 6,356 of the 37,011 Zika cases recorded so far involve pregnant women.

Laboratory tests have confirmed the presence of Zika in 522 of those cases.

Clinical exams were used to identify 30,148 Zika cases in Colombia. Laboratory tests confirmed infections in 1,612 cases, and 5,251 were listed as suspected Zika infections.

Colombia has reported the largest number of cases in Latin America after Brazil, where the outbreak was first detected last year and where 1.5 million Zika cases have been reported.

Health authorities project that more than 600,000 people will be infected with the Zika virus this year in Colombia, and expect there will be more than 500 cases of microcephaly if trends seen in Brazil are borne out.

The Colombian health ministry also has reported 3 deaths from Guillain-Barre syndrome, a neurological disorder that is also suspected of being linked to the virus. – Rappler.com