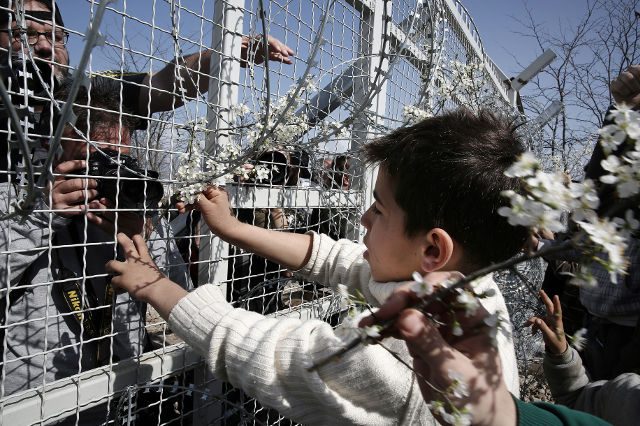 Facebook Twitter Copy URL
Copied
Government spokeswoman Olga Gerovassili: 'We cannot bear the strain of all the refugees coming here... these are temporary measures, there needs to be a permanent solution on where the refugees will be relocated'

ATHENS, Greece – Greece has asked the EU for 480 million euros ($534 million) in emergency funds to help shelter 100,000 refugees, the government said Tuesday, warning that the migrant influx threatened to overwhelm its crisis-hit resources.

“Greece has submitted an emergency plan to the European Commission .. corresponding to around 100,000 refugees,” government spokeswoman Olga Gerovassili told reporters.

“We cannot bear the strain of all the refugees coming here…these are temporary measures, there needs to be a permanent solution on where the refugees will be relocated,” she added.

“Greece has made it clear that it will use every diplomatic means available to find the best possible solution,” Gerovassili said.

With Austria and Balkan states capping the numbers of migrants entering their soil, there has been a swift build-up along the Greece-Macedonia border.

Athens had previously warned that it could be stuck with up to 70,000 people trapped on its territory.

Gerovassili said there were 25,000 migrants and refugees currently in the country and that Macedonia was only allowing “a few dozen” through every day.

Over 7,000 people – many of them stranded in near the Idomeni border crossing for days – spent a freezing night and awoke under wet canvas among sodden wheat fields.

Greek news agency ANA said another 6,000 people were waiting to cross to the mainland after landing on islands in the Aegean from neighbouring Turkey.

The spokeswoman said the Greek army was helping feed some 10,000 people.

Thousands more are fed by aid and church groups and the government has put out a call for private donations of food, medicine and health supplies.

Gerovassili added that migration flows from Turkey showed no sign of slowing down despite the recent deployment of NATO warships to help the Turkish coastguard tackle people-smugglers sending migrants to Greece.

“There has not been a significant reduction in the flow…today there were just over 1,000 (new arrivals) which is considered ordinary,” she said. – Rappler.com