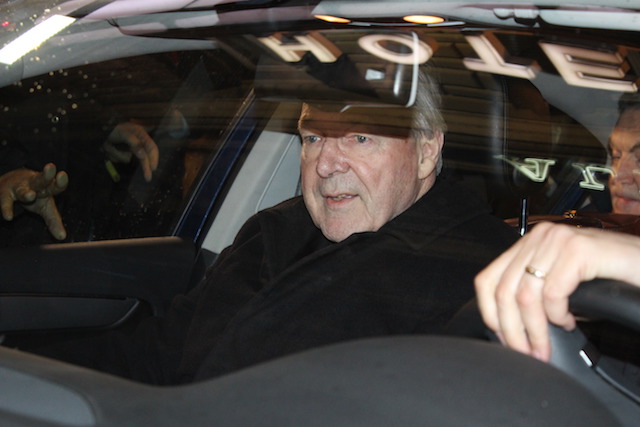 SYDNEY, Australia – Australian Cardinal George Pell said in an interview with Sky News he will not resign from his position as the Vatican’s finance chief over the Catholic Church’s responses to child sex abuse in his homeland.

Pell has denied any wrongdoing during his time in Australia’s Victoria state, where pedophile priests abused dozens of children in the 1970s and 1980s.

The 74-year-old cardinal has told the Royal Commission into Institutional Responses to Child Sexual Abuse that he was deceived by senior clergy about what was happening during a time of “crimes and cover-ups”.

“No, I wouldn’t resign. That would be taken as an admission of guilt,” he told Sky News in an interview in Rome broadcast in Australia on Friday.

“If the Holy Father (Pope Francis) asked me to do it I would point this out but I would do whatever he wanted.”

Pell last week spent 4 days giving evidence to the royal commission about his time in the town of Ballarat, where he grew up and worked, and Melbourne.

In his evidence via videolink from Rome, he admitted that having notorious priest Gerald Ridsdale and other pedophile religious in Ballarat at the same time in the 1970s was a “disastrous coincidence”.

But said he had no idea about the offenses that were occurring, telling Sky that much of his work in Melbourne had been to help set things right for victims and their families.

Pell had drawn criticism for failing to attend the hearings in person in Australia, but said during the interview he was unable to due to a heart condition that had seen him collapse twice after long trips.

The Vatican on Friday, March 4, defended the Catholic Church’s actions on paedophile priests, saying while more needed to be done, Popes Francis and Benedict XVI had taken courageous action. It also stood by Pell.

Vatican spokesman Federico Lombardi said “sensationalism” surrounding the Oscar-winning film “Spotlight” about sexual abuse by clergy in Boston and the Pell hearings had given the public the wrong impression.

Abuse survivors have questioned the credibility of Pell’s claims that he had not been aware of widespread pedophilia among priests, but Lombardi said the cardinal had given “a dignified and coherent personal testimony”.

The result was “an objective and lucid picture of the errors committed in many church environments in the previous decades,” Lombardi said. – Rappler.com