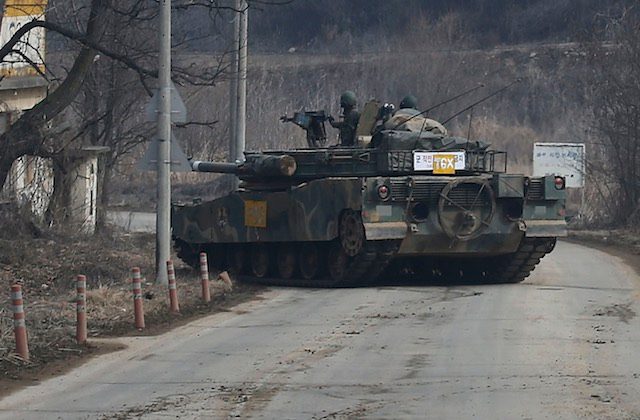 Facebook Twitter Copy URL
Copied
(UPDATED) It comes just days after leader Kim Jong-Un ordered the country's nuclear arsenal to be placed on standby for use 'at any moment,' in response to tough new UN sanctions

SEOUL, South Korea (UPDATED) – South Korea and the United States kicked off their largest-ever joint military drills on Monday, March 7, prompting fresh warnings from North Korea of “indiscriminate” nuclear strikes against Seoul and the US mainland.

The annual exercises always raise tensions on the divided Korean peninsula and the situation is particularly volatile this year, given the North’s recent nuclear test and long-range rocket launch and its fury over the tough UN sanctions imposed by the international community in response.

Participation in the joint drills – known as Key Resolve and Foal Eagle – has been bumped up this year to involve 300,000 South Korean and 15,000 US troops, as well as strategic US naval vessels and air force assets.

In a statement issued hours before the exercises began, North Korea’s powerful National Defense Commission said it was prepared for an “all-out” military counter-offensive.

“As the joint military exercises to be staged by the enemies are regarded as the most undisguised nuclear war drills aimed to infringe upon the sovereignty of (North Korea), its military counteraction will be more preemptive and offensive nuclear strike to cope with them,” the statement said.

The threat came just days after leader Kim Jong-Un ordered the country’s nuclear arsenal to be placed on standby for use “at any moment,” in response to the sanctions resolution adopted last week by the UN Security Council.

Pyongyang has issued similar, dire warnings of nuclear attack in the past, usually during periods of elevated military tensions.

While the North is known to have a small stockpile of nuclear warheads, experts are divided about its ability to mount them on a working missile delivery system.

The National Defense Commission said plans for what it called a “pre-emptive nuclear strike of justice” had been drawn up by the Supreme Command of the Korean People’s Army and ratified by Kim Jong-Un.

The plans would come into operation in the event of “even the slightest military action” by the North’s enemies, it said.

“The indiscriminate nuclear strike… will clearly show those keen on aggression and war, the military mettle of (North Korea),” said the statement carried by the North’s official KCNA news agency.

Targets would include operational theaters on the Korean peninsula, but also US bases on the mainland and in the rest of the Asia-Pacific region.

“If we push the buttons to annihilate the enemies even right now, all bases of provocations will be reduced to seas in flames and ashes in a moment,” the statement added.

Despite a pair of successful long-range rocket launches, most experts believe North Korea is years away from developing a genuine inter-continental ballistic missile (ICBM) capable of reaching the US mainland.

Pyongyang has long condemned the Foal Eagle and Key Resolve exercises, which stretch over nearly two months, as provocative rehearsals for invasion, while Seoul and Washington insist they are purely defensive in nature.

The size of this year’s drills was ramped up as a show of strength in the face of the North’s fourth nuclear test on January 6 and February’s rocket launch, which was seen as a disguised ballistic missile test.

A UN Security Council resolution adopted last week laid out the toughest sanctions imposed on Pyongyang to date over its nuclear weapons program and will, if implemented effectively, apply significant economic pressure on Kim’s regime.

It breaks new ground by targeting specific sectors key to the North Korean economy and seeking to undermine the North’s use of, and access to, international transport systems.

Pyongyang has rejected the sanctions as “unfair, illicit and immoral” and vowed to keep building its nuclear arsenal.

The National Defense Commission said the US and its allies had failed to realize how the “outrageous” sanctions made “this land boil like a crucible of battle.”

South Korea is set to unveil tougher unilateral sanctions against the North on Tuesday, March 8 – a move that is likely to draw further threats of retaliation from Pyongyang. – Giles Hewitt, AFP / Rappler.com