Mar 14, 2016 11:49 AM PHT
Agence France-Presse
Facebook Twitter Copy URL
Copied
'The US and Russia have taken command of, and have a monopoly over, the Syrian issue' 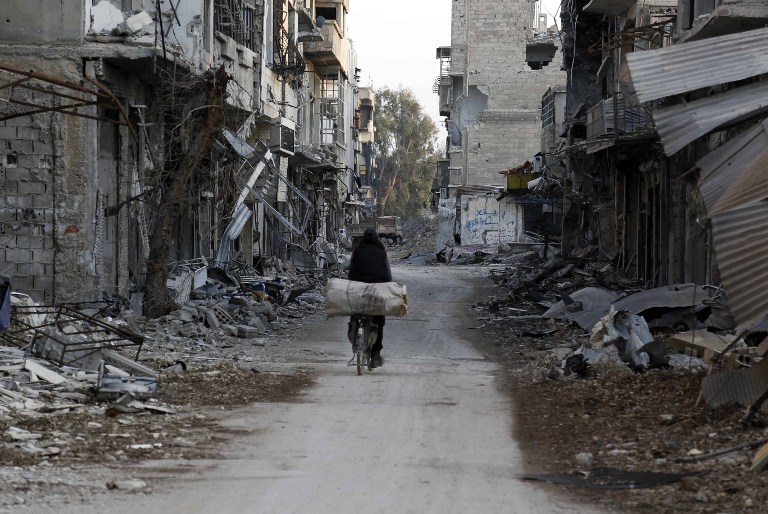 As the conflict enters its 6th year, the embattled regime and fractured opposition are in Geneva for indirect peace talks hosted by United Nations peace envoy Staffan de Mistura.

But the real solution, experts say, is in Russian and American hands.

“The two great powers talk among themselves by phone or in meetings around the world. Then they inform their Syrian allies and de Mistura what they’ve decided,” says veteran opposition figure Haytham Manaa.

“Then, Russia and the US give the regional powers the red lines they’re not supposed to cross. The US bans the Turks from a ground incursion in Syria and asks the Saudis to stop sending arms. Russia does the same thing with Iran,” Manaa tells Agence France-Presse.

Syria’s conflict began on March 15, 2011 with a peaceful protest movement calling for President Bashar al-Assad to step down.

But the uprising turned violent after the government launched a brutal crackdown on dissent, and its key players became the various armed forces – regime, opposition, jihadist, Kurdish – and their respective backers.

Russia and the United States have exerted their influence over opposing sides of the complex war to broker a landmark truce that has been holding since February 27.

“The US and Russia have taken command of, and have a monopoly over, the Syrian issue,” says Joseph Bahout, a visiting scholar at the Carnegie Endowment in Washington.

“Indeed, what started as a non-violent movement demanding reforms metamorphosed into an overlapping domestic, regional, and international struggle over Syria,” Salloukh says.

He expects that “the strategic interests of Russia and the US will determine the shape of the settlement in Syria rather than the aspirations of its peoples.”

Both the US and Russia were hesitant to become involved in a conflict as complex and unpredictable as Syria.

“The notion that we could have… changed the equation on the ground there was never true,” US President Barack Obama has told The Atlantic magazine reporter Jeffrey Goldberg.

When the United States did finally get militarily involved in Syria in September 2014, it was as part of a bombing campaign against the Islamic State (ISIS) group.

One year later, Russia launched its own air war backing Assad after a devastating string of losses for the regime in the spring and summer of 2015.

Moscow’s intervention was a major turning point for pro-Assad forces, shoring up their positions in the south, center, and north.

“Moscow long believed that the regime would pull through on its own. It’s Tehran, the regime’s other ally, that sounded the alarm,” a foreign diplomat in Damascus tells Agence France-Presse.

“Iranian officials went to Moscow to tell the Russians that if they didn’t intervene immediately, the regime would collapse,” the diplomat says.

“Asking the Syrian actors to agree has proven unsuccessful… because their ideological and territorial disagreements are so profound,” says Joshua Landis, director of the Center for Middle East Studies at the University of Oklahoma.

“But all actors are so entirely dependent on their sponsors that they must comply with the wishes of their armourers.”

But Russian and American leverage over warring parties in Syria has its limits.

About half of Syrian territory is controlled by either ISIS or Al-Qaeda affiliate Al-Nusra Front, complicating the current truce deal and a future settlement.

And Assad’s regime has occasionally spoken out of turn.

In an interview with Agence France-Presse in February, Assad said he sought to regain control over all of Syria, spurring the Russian government to slap him down.

“Russia has invested very seriously in this crisis, politically, diplomatically and now also militarily,” Vitaly Churkin, Russia’s envoy to the UN, said at the time.

Fyodor Lukyanov, head of the Russian government-linked Council on Foreign and Defence Policy, says the Russian-US leadership are reminiscent of “the good old times.”

“Thirty years after the end of the Cold War, it turns out that the only actors capable of deciding and taking action are Moscow and Washington,” he says.

“Russia and the United States are indeed the only ones capable of pushing the warring parties towards peace,” Lukyanov tells Agence France-Presse.

“Other countries will not, or cannot, do it. This is the new world order.”  – Sammy Ketz with Olga Rotenberg in Moscow, Russia, AFP / Rappler.com