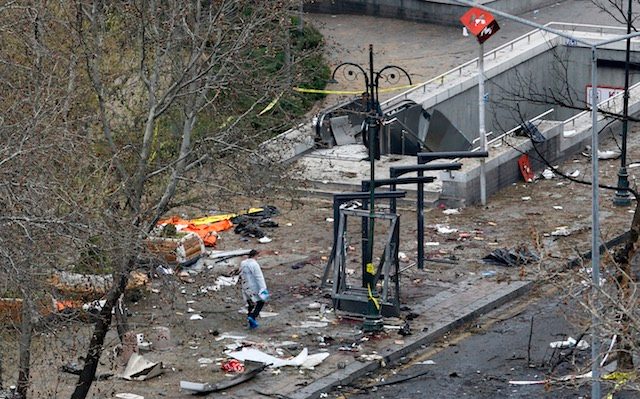 ANKARA, Turkey – Turkish Prime Minister Ahmet Davutoglu said on Monday, March 14, that the evidence so far pointed to Kurdish rebels being behind a deadly suicide car bombing in Ankara.

“There are very serious, almost certain findings that point to the separatist terrorist organization,” Davutoglu told reporters after visiting the wounded at an Ankara hospital, in reference to the outlawed Kurdistan Workers’ Party (PKK).

Davutoglu said that of the 37 people killed in the blast, 35 had been identified as victims, one was confirmed as an attacker and one was believed to have been helping the attacker.

Eleven suspects have so far been detained over the bombing, he added.

“Wherever the terrorist organization is backed into a corner and confronted with a serious security operation, it carries out such attacks directly targeting civilians in order to drag people into despair,” he said.

“It is not the first time it has happened,” he said, adding that the attacks including the latest one clearly revealed the “ugly face of the terrorist organization”.

He vowed that Turkey would “take any step required to defend this country” and said the army carried out a “very comprehensive operation” in northern Iraq targeting PKK bases, as well as rebels in the Kurdish-majority southeast.

Turkey has in recent months waged an all-out assault on the PKK, which launched an insurgency against the Turkish state in 1984, fighting for greater autonomy and rights for the country’s largest ethnic minority.

After the collapse of a fragile truce, deadly clashes resumed last year between security forces and rebels in the southeast. – Rappler.com