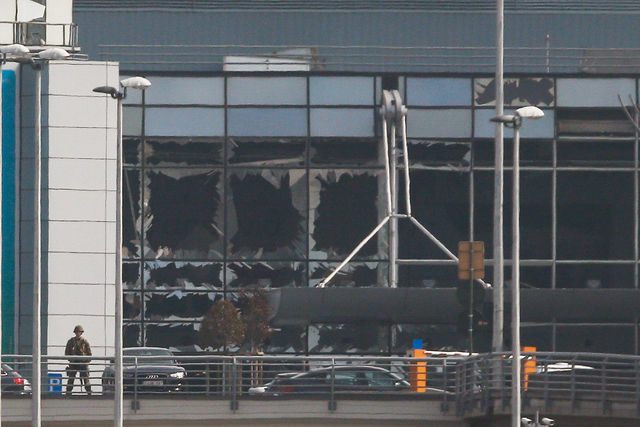 BRUSSELS, Belgium (3rd UPDATE) – Three suicide bombers who struck Brussels airport and a metro train in attacks claimed by the Islamic State (IS, formerly known as ISIS or the Islamic State in Iraq and Syria) were identified Wednesday, as a grieving nation observed a minute’s silence for victims of the carnage.

As hundreds of mourners gathered in the city in a show of solidarity with the 31 people killed and 300 injured, prosecutors said brothers Ibrahim and Khalid El Bakraoui had carried out attacks at Zaventem airport and Maalbeek station.

Bomb-making expert Najim Laachraoui was identified by police sources to Agence France-Presse as the second airport bomber, while police stepped up a huge manhunt for a third airport attacker whose suitcase bomb failed to detonate.

Turkey said it had detained Ibrahim El Bakraoui near the Syrian border in June 2015 and deported him as a “foreign terrorist fighter”, piling more pressure on Belgian authorities who have faced criticism for failing to tackle the extremist menace.

All 3 suspects have been linked to the November attacks in Paris, which like the Brussels bombings were claimed by ISIS, underscoring the threat European nations face from the jihadist group.

US President Barack Obama urged nations to unite against terrorism and said wiping out ISIS was his “top priority.”

Prosecutor Frederic Van Leeuw revealed that Ibrahim El Bakraoui had left a desperate “will” on a computer that he dumped in a trash can, in which he said he felt “hunted” and added “I don’t know what to do.”

In an apparent reference to Salah Abdeslam, the key suspect in the Paris massacre arrested in Brussels on Friday, Bakraoui added: “I don’t want to end up in a cell next to him.”

A third man in a hat and white jacket seen on CCTV footage with Bakraoui and Laachraoui pushing their bomb-filled bags on trolleys through the departure hall shortly before the attacks is still at large, Van Leeuw said.

Belgium has declared 3 days of mourning and on Wednesday hundreds of airport staff and their families carried candles and flowers in a silent march and vigil near Zaventem. (READ: World condemns Brussels bombings as strike on European democracy)

“It could have happened to me,” said security guard Gregory Lupant, who added he was worried about colleagues “who had not been heard from, and others who had lost a leg or finger.”

Earlier in the day, King Philippe, Prime Minister Charles Michel and European Commission chief Jean-Claude Juncker led a minute’s silence outside the EU headquarters in Brussels, the city that is also home to NATO.

In the city’s Place de la Bourse, where mourners have laid banners and candles, defiant applause broke out among the large crowd gathered to honor the dead, chanting: “Long live Belgium”.

But the attacks have raised troubling new questions about Belgium’s ability to handle the jihadist threat, already under scrutiny after it emerged that the Paris attacks were largely planned in Belgium.

Belgian authorities had already been hunting the Bakraoui brothers, both Belgian nationals with long criminal records, over their links to Abdeslam.

They issued a wanted notice for Laachraoui on Monday, the day before the attacks, with officials saying he had travelled to Hungary with Abdeslam last year and that his DNA has been found on explosives linked to the Paris rampage.

Then on Wednesday, Turkish President Recep Tayyip Erdogan said Turkey had arrested one of the Brussels attackers last year and deported him to the Netherlands. A senior Turkish official later confirmed that it was Ibrahim El Bakraoui.

“Despite our warnings that this person was a foreign terrorist fighter, the Belgian authorities could not identify a link to terrorism,” Erdogan said.

Belgium’s Justice Minister Koen Geens denied however that the 30-year-old Belgian citizen had been flagged as a possible terrorist.

“At that time, he was not known here for terrorism,” Geens told VRT television. “He was a common law criminal out on parole.”

In a raid on Tuesday night investigators found a bomb factory in an apartment near where Ibrahim’s computer was left in the Brussels district of Schaarbeek, an area that has links to Abdeslam.

They found 15 kilos (33 pounds) of TATP high explosive, chemicals and detonators, Van Leeuw said. Prosecutors said on Tuesday an unexploded bomb, an ISIS flag and bomb-making materials had been found.

Belgian Foreign Minister Didier Reynders said the attacks, the worst in the country’s history had killed or wounded people of around 40 nationalities.

The dead include a Peruvian mother of twin girls, one of whom was injured by flying debris in the airport attacks.

The health ministry said late Wednesday that the number of people injured had climbed from 270 to 300, 61 of whom were in critical condition.

Brussels airport announced it would stay shut until at least Saturday while investigators continued to comb through the wreckage.

The city’s subway system partially reopened, although rush-hour crowds were thinner than usual and soldiers were checking passengers’ bags.

“I’m a bit afraid, especially for my little brothers,” said 18-year-old Dominique Salazar as she took her young siblings to school. “But we don’t have any other choice to get around.”

Authorities are under immense pressure over their apparent inability to smash extremist networks in Belgium, Europe’s top exporter of jihadist fighters to Syria per capita.

Leaders across Europe have reacted with outrage to the bombings, with the EU calling an emergency meeting Thursday of interior ministers and vowing to defend democracy and combat terrorism “with all means necessary”.

“Right now, many European nations… don’t alert each other when they turn away a suspected jihadist at the border or when a passport is stolen,” she said.

US Secretary of State John Kerry is to visit Brussels on Friday to offer Washington’s support and issue condolences. – Danny Kemp and Lachlan Carmichael, AFP/Rappler.com