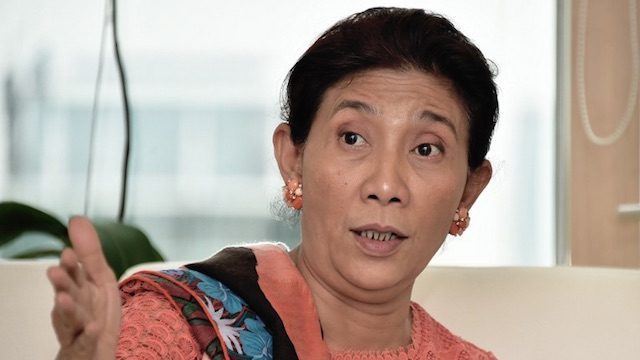 Facebook Twitter Copy URL
Copied
It was the latest salvo in a rare public row between the nations, which began two weeks ago when Indonesian and Chinese vessels clashed near Indonesia's Natuna Islands

JAKARTA, Indonesia – Indonesia called on China Friday, April 1, to hand over a fishing boat it claims was operating illegally in its waters near the South China Sea, saying big countries should not “bully” smaller ones.

It was the latest salvo in a rare public row between the nations, which began two weeks ago when Indonesian and Chinese vessels clashed near Indonesia’s Natuna Islands.

An Indonesian patrol boat had been seeking to detain a Chinese fishing vessel, which they claimed had been operating without a permit. But as they towed it to shore, Chinese coastguards appeared and rammed the captured boat, helping it to go free.

Beijing claims nearly all the South China Sea – through which a third of the world’s oil passes – despite conflicting claims from the Philippines, Vietnam, Malaysia, Taiwan and Brunei.

Indonesia does not have overlapping territorial claims with Beijing in the hotly disputed waters, but it does object to a segmented line China uses to define its claims since this overlaps Indonesia’s exclusive economic zone north of the Natunas.

Indonesian Fisheries Minister Susi Pudjiastuti, who has been leading a crackdown on illegal fishing in the archipelago’s vast water, on Friday demanded Beijing hand over the Chinese trawler to Indonesian authorities.

“I do believe China is a great country, with good law enforcement, and they do not back illegal fishing, even if it is done by Chinese vessels,” she told AFP in an interview.

“I do believe they will honor me, by handing over this (illegal fishing) vessel.”

And she added: “I think as a big country you cannot bully small countries.”

The campaign against illegal fishing has seen around 200 foreign vessels detained in Indonesian waters and many have been blown up in public displays after their crews were removed.

Pudjiastuti said Friday around three would be prosecuted, but the rest would likely be deported back to China. She would not be drawn on whether the boat would be blown up if handed over.

There was no immediate response from the Chinese embassy in Jakarta, but Beijing has said previously the fishing boat was operating in a “traditional Chinese fishing ground”.

Pudjiastuti rejected this claim, insisting it was in Indonesia’s exclusive economic zone – an area where a state has rights relating to exploration and use of marine resources.

Indonesia’s defense ministry also said Friday that F-16 fighter jets would be deployed to help defend the fish-rich Natunas, in the far northwest fringe of the archipelago, part of an ongoing military build-up around the islands. – Rappler.com