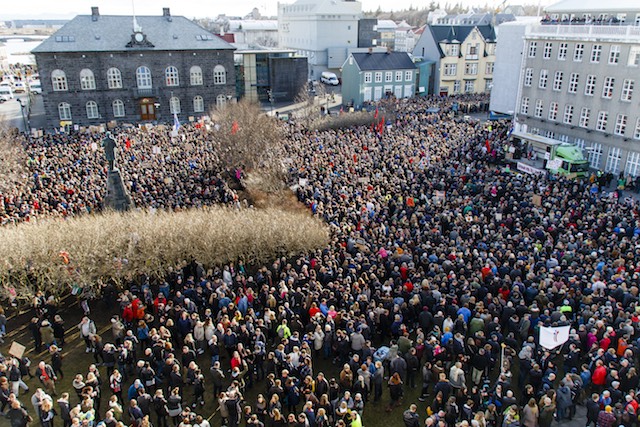 REYKJAVIK, Iceland – Iceland’s prime minister is in the hot seat after the leaked “Panama Papers” sparked allegations that he and his wife used an offshore firm to hide million-dollar investments, with thousands taking to the streets demanding he quit.

Huge crowds poured into the square outside parliament in Reykjavik late Monday, April 4, calling for Sigmundur David Gunnlaugsson to step down over financial records showing that he and his wife bought a company in the British Virgin Islands in 2007.

He sold his 50% share to his wife Anna Sigurlaug Palsdottir for a symbolic sum of one dollar at the end of 2009.

But when he was elected to parliament for the first time in April 2009, as a member of the center-right Progressive Party, he neglected to mention his stake in his declaration of shareholdings.

As the crowds gathered outside parliament, he told public broadcaster RUV he regretted not revealing this sooner.

The issue is particularly sensitive in Iceland, a country marked by the excesses of the 2000s when senior bankers used shell companies in tax havens to conceal their dealings in risky financial products.

Police said the crowds that turned out in Reykjavik on Monday night outnumbered the thousands who in 2009 brought down the right-wing government over its responsibility in Iceland’s 2008 banking collapse.

Iceland’s big banks collapsed in October 2008 after borrowing beyond their means to fund ambitious investments abroad. Before their collapse, their liabilities were worth more than ten times Iceland’s total GDP.

The crash led to an unprecedented financial crisis, a deep recession and a bailout from the International Monetary Fund.

Gunnlaugsson, a former journalist, insists that despite the financial turbulence he was never tempted to move his money offshore and that his wife paid all her taxes in Iceland.

“She has neither utilized tax havens nor can you say that her company is an offshore company,” Gunnlaugsson said on his website.

In an interview with Swedish public television SVT recorded last month, excerpts of which were aired in Iceland on Sunday, April 3, he became visibly upset after being repeatedly asked about his wife’s company, eventually storming out of the room.

“It’s like you are accusing me of something,” he declared.

‘Lack of faith’ in Iceland

Elected prime minister in 2013, 41-year-old Gunnlaugsson was seen as a refreshing change from the political old guard, which was accused of having turned a blind eye to the banks’ reckless investments. 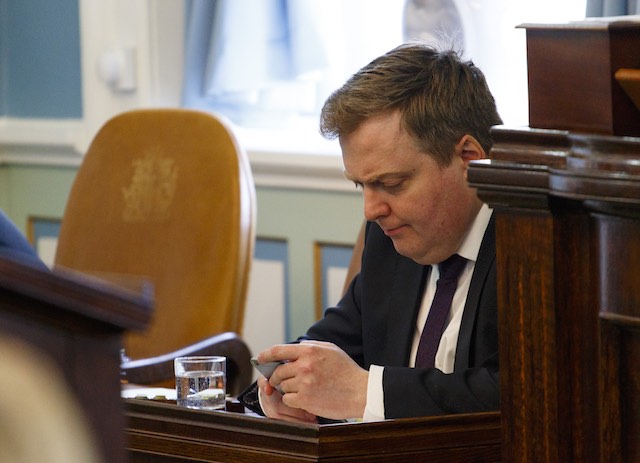 His wife, also 41, is the daughter of a businessman who made a fortune from having Iceland’s only Toyota dealership.

On March 15, before the “Panama Papers” leaks in the international media, she took to Facebook to acknowledge the existence of Wintris, the company that she and Gunnlaugsson acquired in 2007 to manage her inheritance from her father.

She said that with the help of international consultancy KPMG, she had made sure to pay all her taxes in Iceland.

But the pressure on Gunnlaugsson continues to mount, with the left-wing opposition expected to table a motion of no confidence in parliament this week.

Gunnlaugsson had “displayed his lack of faith in the Icelandic currency and economy by placing his money in a tax haven,” she wrote.

While the opposition would likely back the call for his resignation, Gunnlaugsson’s Progressive Party would probably oppose it, leaving the junior member of his governing coalition, the right-wing Independence Party, holding the balance of power.

Gunnlaugsson insisted Monday he would not resign.

A source of particular embarrassment for Gunnlaugsson, who led a public revolt against the drastic repayment conditions initially imposed by countries whose citizens lost money in the banking collapse, is the fact that Wintris is listed among the banks’ creditors, with millions of dollars in claims.

“It is sad that those who… say they will lead by example (and) say that the big plan is to believe in Iceland then decide that their money is better kept elsewhere,” prominent Icelandic historian and intellectual Gudni Johannesson told RUV. – Haukur Holm, AFP / Rappler.com