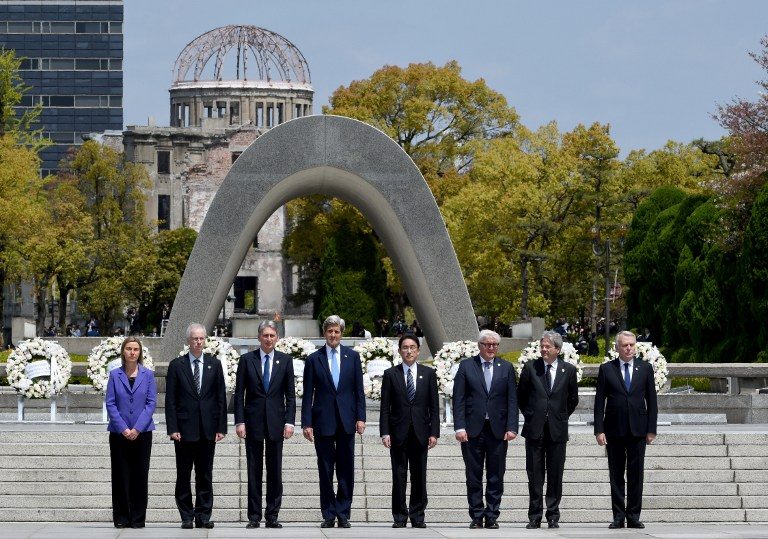 The US secretary of state, who was joined by other G7 foreign ministers, is the highest-ranking administration official to pay respects at the spot where American planes launched the first-ever nuclear attack more than 7 decades ago.

Washington officials say Obama is considering a trip to Hiroshima late next month around the time of a Group of Seven summit, which is being held in another part of Japan.

An Obama visit would have huge symbolic importance as the first to Hiroshima by a sitting US president.

“I want to express on a personal level how deeply moved I am” to be the first US secretary of state to visit Hiroshima, Kerry told reporters Monday as he and his G7 counterparts wrapped up two days of talks.

A museum at the memorial site is a “gut-wrenching display that tugs at all your sensibilities as a human being,” Kerry said.

About 140,000 people died from the Hiroshima blast on August 6, 1945, or later from severe radiation exposure. The city, a key military installation during the war, was flattened by the massive detonation.

“Everyone should visit Hiroshima, and everyone means everyone,” Kerry said.

“I hope one day the president of the United States will be among the everyone who is able to come here.”

But Kerry declined to comment on the likelihood of an Obama visit.

“Whether or not he can come as president, I don’t know,” he said.

“That is subject to a very full and complicated schedule that the president has to plan out way ahead of time.”

On Monday morning, the G7 ministers and the foreign policy chief of the European Union visited the memorial museum, which shows the devastating impact of the bombing – such as survivors’ burned clothing and other personal effects.

“It is a stark, harsh, compelling reminder not only of our obligation to end the threat of nuclear weapons, but to rededicate all our effort to avoid war itself,” Kerry wrote in the museum’s guest book.

The G7 later issued its Hiroshima Declaration that called for a “world without nuclear weapons.”

The foreign ministers discussed a range of other issues, from the refugee crisis and war in Syria to North Korea’s latest military provocations and conflict-wracked Ukraine.

They pledged to step up the fight against the Islamic State group, while expressing concern about maritime disputes in Asia – an oblique criticism of China’s territorial ambitions.

Earlier Monday, hundreds of schoolchildren waved flags of G7 nations and the EU as the group walked to a cenotaph in the leafy park next to the museum.

They laid wreaths at the site, with the ruins of a domed building gutted by the blast in the background.

“There are no bad feelings and we’re not angry,” 43-year-old Hiroshima businessman Jun Miura told AFP, adding that he hoped Obama would visit the city.

“I want the president to see for himself exactly what happened. I am sure he has seen video of it, and read about it. But you have to come here to see it and contemplate.”

For US tourist Jeremy Griffiths, visiting the memorial is a stark reminder of the scale of the damage.

“You can read all you want, but until you are actually at the place (where the bombing) occurred – it just changes how you look at it,” said the 29-year-old IT programmer from Florida.

The bombings are a highly emotive subject in both Japan and the United States.

Japan, as the only nation to have experienced a nuclear attack, emphasizes the suffering its people endured. But while publicly calling for the eradication of nuclear weapons, it has for decades been a close security ally of Washington under the protection of the US nuclear umbrella.

Many in the US, meanwhile, chafe at any suggestion of an apology, saying Japan started the war with its attack on Pearl Harbor and that the bombings hastened the war’s end – preventing more deaths. – Peter Brieger, AFP / Rappler.com