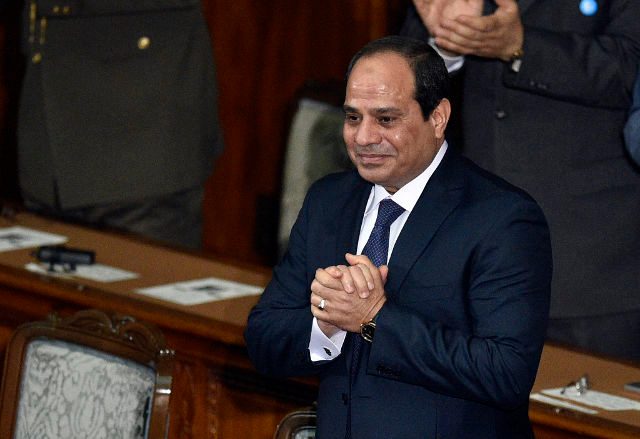 Facebook Twitter Copy URL
Copied
Sisi is weathering a storm of controversy over a deal that sets maritime boundaries with Saudi Arabia, placing two islands in the Red Sea within the kingdom's borders

CAIRO, Egypt – President Abdel Fattah al-Sisi hit back Wednesday, April 13, at criticism of a deal to hand Saudi Arabia two islands and of the probe into an Italian student’s murder, saying “evil” people were conspiring against Egypt.

Sisi is weathering a storm of controversy over a deal announced at the weekend that set maritime boundaries with Saudi Arabia, placing two islands in the Red Sea within the kingdom’s borders.

The announcement, which came as a surprise to many Egyptians who thought the islands belonged to their country, came during a five-day visit by Saudi King Salman.

While Sisi’s government was basking in the announcements of major Saudi investments during Salman’s visit, Italy suddenly said it was withdrawing its ambassador from Cairo, citing a lack of progress in the probe into Giulio Regeni’s death.

The Cambridge University student had been found brutally murdered more than a week after his disappearance from Cairo earlier this year.

The Italian press has suggested Egyptian security services were behind his abduction and murder, which Egypt denies.

Addressing both issues in a speech to a group of officials and journalists, Sisi suggested conspirators were working against the country.

“The conspiracy by the people of evil, they have been at work, and are still working,” Sisi said, adding that he would not identify them.

“Trust the man you entrusted with your country, with your honour. Your land is your honour. I’m saying, guys, there’s a lot of chaos,” he said in the speech, broadcast live on state television.

‘We do this to ourselves’

Sisi said the islands, which Saudi had leased to Egypt in 1950, belonged to the kingdom, something he said was recognised by former president Hosni Mubarak in 1990.

“We don’t sell our land to anyone, and we don’t take anyone’s rights,” Sisi said.

“Why are Egyptians more suspicious of each other than people are in other countries?” he asked, suggesting experts and religious clerics should look into the question.

The announcement of the deal on Saturday provoked a backlash on social media and even in press normally loyal to the president, with thousands tweeting a hashtag accusing Sisi of selling the land.

Others, while conceding the islands belonged to Saudi Arabia, criticised his often opaque administration for not publicising the deal before it was signed.

“I hope no one brings this matter up again,” Sisi said after explaining the background to the deal, and saying parliament will vote on it.

His police have faced criticism since for a crackdown on Islamists that has killed hundreds of protesters and imprisoned thousands.

When Regeni’s corpse was discovered in February, the signs of torture on his body led some in the country to point the finger at security services.

Egyptian police have suggested a criminal gang – whose alleged members were all killed in a shoot-out with police – could have been behind the murder, an explanation Italy dismissed before recalling its ambassador last week.

Rome had been among Sisi’s key supporters, a fact he mentioned in his speech.

Sisi chided Egyptians for casting doubts on the security services.

“The moment his death was announced, people from among us said the security services did it,” he said.

“We do this to ourselves.” – Rappler.com