Apr 23, 2016 12:29 AM PHT
Agence France-Presse
Facebook Twitter Copy URL
Copied
(UPDATED) It is the largest ever one-day signing of an international agreement 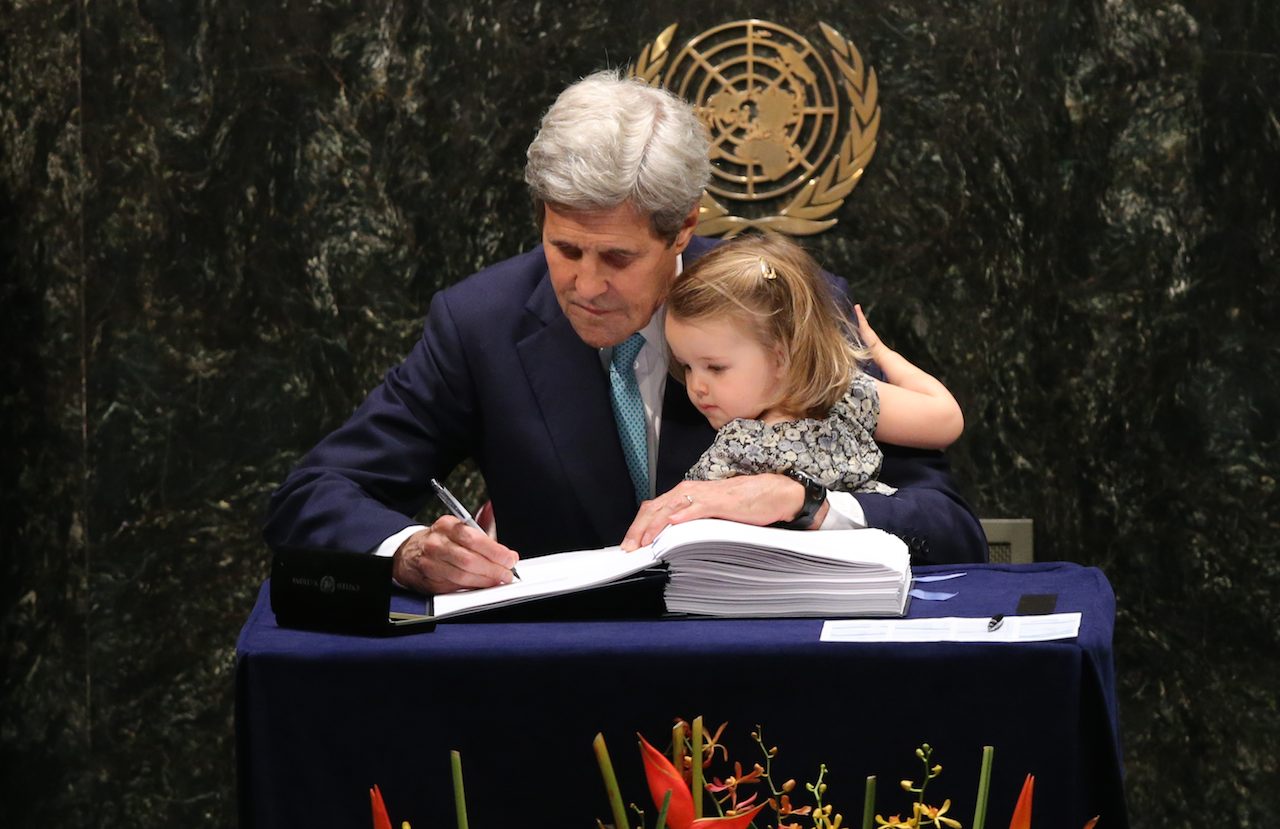 French President Francois Hollande was the first leader to put his signature to the accord during a ceremony at the United Nations, followed by leaders from island-states hardest hit by climate change.

US Secretary of State John Kerry came to the podium cradling his two-year-old granddaughter Isabelle and triggered warm applause from delegates as he signed the historic deal.

It was the largest ever one-day signing of an international agreement.

Held on Earth Day, the ceremony comes 4 months after the hard-won deal was clinched in Paris and marks a first step toward binding countries to the promises they made to cut greenhouse gas emissions.

“This is a moment in history,” UN Secretary-General Ban Ki-moon told leaders gathered at the UN General Assembly.

“Today you are signing a new covenant with the future.”

Holdout countries still have a year to sign the deal, but the focus has now turned to swift ratification and entry into force before the target date of 2020.

The Paris agreement will come into force when 55 countries responsible for 55% of the world’s greenhouse gases have ratified it.

Together the signatories at the UN ceremony account for 93% of global greenhouse gases, according to calculations by the World Resource Institute.

France’s parliament will give final approval before this summer, Hollande said, urging the 28-nation European Union to “lead by example” and ratify the deal before the end of the year.

Momentum is building to ensure the agreement enters into force quickly.

China and the United States said they will ratify this year and are pushing for others to follow suit so that the agreement becomes operational possibly as early as late 2016 or in 2017.

Caught in election-year turmoil, the United States plans to ratify the Paris accord with an executive agreement, bypassing the Senate and setting up a complex process for any future president wishing to pull out.

Canada’s Prime Minister Justin Trudeau said he would ask parliament next month to endorse the accord with a vote this year and pledged to help developing countries confront the challenge.

“They shouldn’t be punished for a problem they didn’t create nor should they be denied the opportunities of clean growth,” said Trudeau, drawing loud applause.

Actor and environmental campaigner Leonardo DiCaprio urged leaders on, telling them: “The world is now watching”.

“You will either be lauded by future generations or vilified by them,” he said.

A total of 15 countries or parties, most of them island-states, formally presented the completed ratification to the United Nations.

“Some may say it’s only a small step. We need to make it a huge one,” said the prime minister of the Polynesian island of Tuvalu, Enele Sosene Sopoaga.

Ban stressed that the window for keeping the global temperature rise in check was rapidly closing.

Last month was the hottest March in modern history and 2016 is shaping up as a record-breaking year for rising global temperatures.

The signing ceremony was seen as a triumph for Ban, who pushed for the deal throughout his tenure and has listed the agreement in Paris as one of his proudest moments as UN chief. – Carole Landry, AFP/Rappler.com