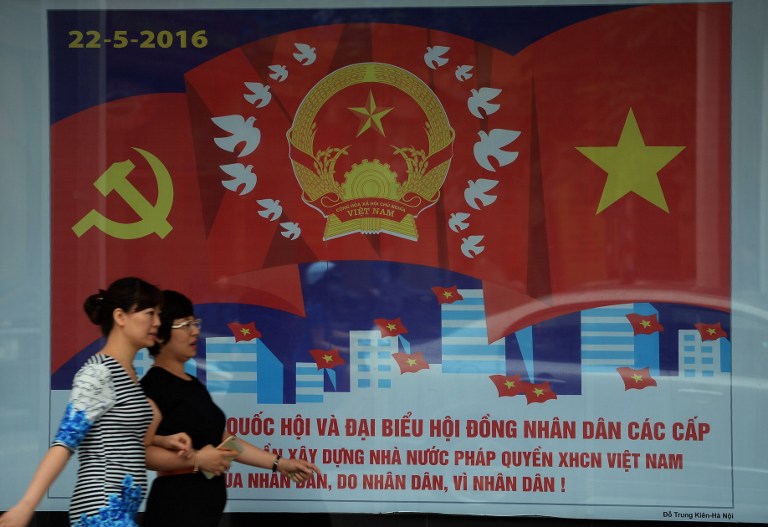 HANOI, Vietnam (UPDATED) – Communist Vietnam has blocked a motley crew of independent candidates from running for its rubber-stamp parliament, according to official results released Tuesday, April 26, a move activists said highlights its empty gestures towards democracy.

In an unprecedented showing this year more than 100 independent candidates – including dissidents, a taxi driver, and a pop star – tried to run for the National Assembly.

But of the 870 candidates approved to contest the May 22 elections only 11 were not from the ruling communist party.

Nguyen Hanh Phuc, from the National Elections Committee, said this was due to strict quotas aimed a creating a representative cross-section of society in the legislative body.

“We need the appearance of all social groups participating in the National Assembly,” he told reporters.

But democracy activists said all genuinely independent candidates have now been excluded from the race.

While the constitution allows anyone over 21 to seek election to parliament, the reality is quite different.

“No matter how much effort they put into running as an independent candidate, they’d definitely fail if they’re not on the pre-approved list,” an official at a local election unit told AFP.

The official, who spoke on condition of anonymity, said there were secret plans to allow some independent candidates to run to give the impression of functioning democracy in the authoritarian country.

“I personally was told to encourage two neighbors to run, to demonstrate that the campaign is democratic,” he said, adding that he later encouraged them to “voluntarily” withdraw from the race.

Despite attracting widespread public support from her social media campaign, pop singer Mai Khoi – dubbed Vietnam’s Lady Gaga for her eye-catching wardrobe and pink hair – was among those disqualified.

“It’s a waste of time and money,” she said of the election process.

Phan Van Bach, a 41-year-old taxi driver and father of 4, said authorities used “childish tactics” and threats to force him out of the race.

Bach’s wife received a call saying “Tell your husband to stop running for elections or he might have a traffic accident,” he said, adding he remained undeterred.

For lawyer Vo An Don, from south central Phu Yen province, it was no surprise that the independent candidates were disqualified.

“In Vietnam, becoming a National Assembly deputy as an independent candidate is like an elephant trying to sneak through a hole the size of an ant,” he said, using a Vietnamese proverb.

But academic and failed candidate Nguyen Quang A said he still felt the exercise had been a success.

“This is just a small step in a long and difficult process,” he said.

“Everyone has learned a lot – what an election is, how the process works, where the law is unconstitutional.”

Mai Khoi has issued a video invitation to US President Barack Obama, who is due to visit Vietnam in May, to meet the disqualified candidates and push for electoral reform. – Cat Barton, AFP / Rappler.com