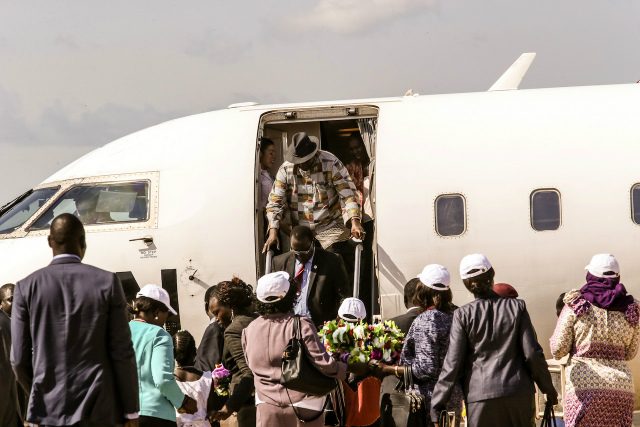 Under terms of an August 2015 peace deal, the 30 ministerial posts are split between Kiir, former rebel chief-turned-first vice president Riek Machar, opposition and other parties.

UN Secretary-General Ban Ki-moon said the naming of the ministers was an “important milestone” in the peace process, urging the parties “to cease immediately all hostilities”. The transitional government is to remain in place until October 2018.

Machar returned to the capital Juba on Tuesday and was immediately sworn into the post of vice president – a position he was sacked from five months before war broke out. Fighting erupted in December 2013 when Kiir accused Machar of plotting a coup, claims he always denied.

The conflict, which has torn open ethnic divisions, has been characterised by horrific rights abuses, including gang rapes, the wholesale burning of villages and cannibalism.

“Cooperation is important,” Machar told the new ministers, saying people were still fearful and that leaders needed to show them the peace deal would work.

“If we act as groups in the cabinet, we will fail the people of South Sudan.”

Kiir loyalists remain in key positions, with Kuol Manyang staying on as defence minister and David Deng Athorbei as finance minster with the job of rebuilding an economy left in ruins by more than two years of war.

The all-important petroleum portfolio was handed to Dak Duop Bichok.

The foreign ministry goes to Deng Alor, a post he held under a united Sudan, before South Sudan won its independence in 2011.

Alor belongs to a group of influential politicians known as the “former detainees”, who were jailed at the outbreak of fighting but later released following regional pressure.

Opposition leader and outspoken government critic Lam Akol becomes minister for agriculture and food security — a crucial job in a country where five million are in need of aid, and some areas are on the brink of famine.

Ensuring they work together in a unity government, and that the thousands of rival armed forces now in separate camps inside the capital keep their guns quiet, will be a major challenge.

Both sides remain deeply suspicious, and fighting continues with multiple militia forces unleashed who now pay no heed to either Kiir or Machar.

Tens of thousands of people have been killed and more than two million driven from their homes in the conflict, which has reignited ethnic divisions and been characterised by gross human rights abuses.

Dozens of political prisoners remain in detention, although a former regional governor and a university professor held for months were released this week, Amnesty International said on Friday.

Speaking after his release, Bakasoro said he hoped the new government would work towards peace.

“I hope those who will be in the government will do the right thing — not for themselves, but for the people of this country,” he told reporters.

“The common citizens are the ones suffering, women are suffering, children are dying.”

Amnesty said the release of the two men “represents a mere fraction of people being detained by NSS and other security forces such as the military” and called for 33 other prisoners to be charged or released.

“Some have been beaten, especially during interrogation or as a form of punishment,” Amnesty added, saying their treatment may “amount to torture”. – Rappler.com