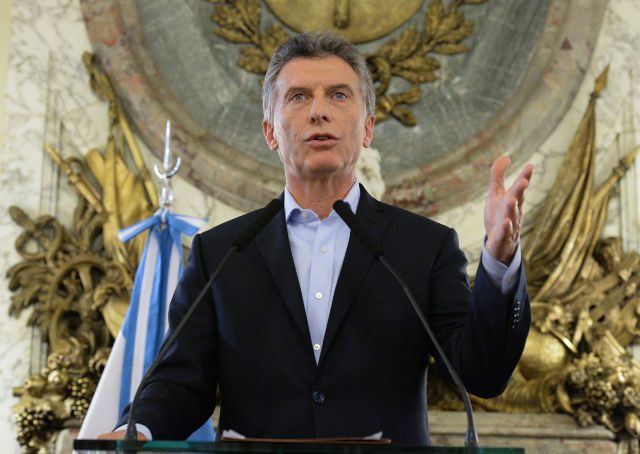 Two major unions, the CGT and CTA, joined forces in calling an afternoon rally in Buenos Aires against the conservative president’s cuts to spending and public jobs.

“The whole workers’ movement is going to mobilize against layoffs, cuts and poverty, which is deepening under Macri’s government,” said Jose Rigane, leader of one of the branches of the CTA.

Private and public sector workers were called to join in Friday’s marches as well as a further demonstration planned on Sunday to mark International Workers’ Day.

Macri has passed a series of economically liberal reforms since taking office on December 10, vowing to strengthen the economy over the long term after 12 years of leftist rule.

Unions say 100,000 workers have lost their jobs in the public and private sectors since Macri took office.

The government says it laid off 11,000 public workers in the first quarter of this year.

Unions demand Macri bring down the soaring rate of inflation, which has driven up the price of food. Analysts forecast the rate will be 36 percent this year.

The president suffered his first defeat this week when opposition senators approved a bill that aims to halt the layoffs. He could veto the bill but that could be politically costly.

Macri will be far away from the capital on Friday in a northern region where he was scheduled to launch a water production program that the government says will generate 200,000 jobs. –  Liliana Samuel, AFP/Rappler.com