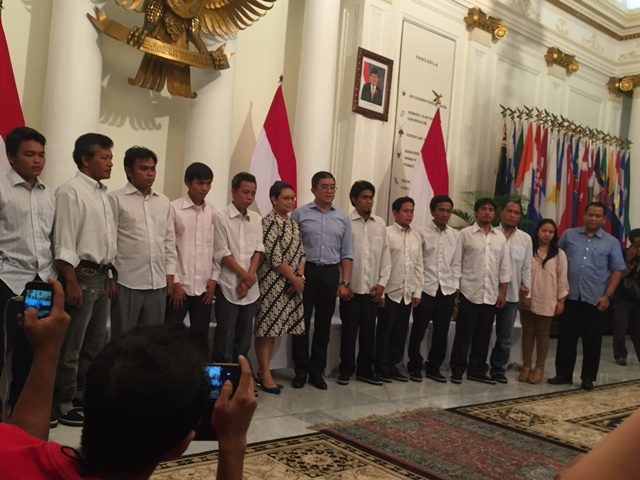 JAKARTA, Indonesia – An Indonesian sailor told Monday, May 2, how Philippine Islamic militants threatened to slit his throat during a terrifying kidnap ordeal, a day after he and 9 other crew members were released.

The sailors were freed Sunday in the strife-torn southern Philippines after more than a month in the hands of Abu Sayyaf militants, and flew back to Jakarta.

The Indonesians were among about 20 foreigners abducted in a recent Abu Sayyaf kidnapping spree, and their release came just days after the militants beheaded a Canadian hostage.

The sailors, who were taken hostage in late March from a tugboat transporting a coal barge, were reunited with their families Monday after doctors confirmed they were in good health.

Crew member Julian Philip described how they were taken hostage by 8 militants disguised in Philippine police uniforms, who boarded the tug from speedboats and tied up the sailors.

The barge was then abandoned, and the Indonesians were taken to an island and divided into two groups. They were moved every few days to avoid the military, which has launched an assault against Abu Sayyaf.

“We were all stressed out because they frequently threatened to slit our throats,” he told reporters after the 10 were reunited with their families at the foreign ministry.

However, Philip added the militants did not harm them and he thought that in reality “they did not want any of us to die as they would not get any money”.

He said he did not know whether a ransom was paid for their release.

“We were just put in a car and sent on our way and told to look for the governor’s house,” he said.

The sailors turned up at the house of a local governor on Jolo, a mountainous and jungle-clad island in the far south of the Philippines that is an Abu Sayyaf stronghold.

Indonesian Foreign Minister Retno Marsudi on Monday dodged questions about whether a ransom had been paid. The Abu Sayyaf does not normally free hostages unless ransom demands are met.

Authorities say the group is still holding at least 11 foreign hostages – four sailors from Indonesia and four others from Malaysia, a Canadian tourist, a Norwegian resort owner and a Dutch birdwatcher.

Abu Sayyaf is a radical offshoot of a Muslim separatist insurgency in the south of the mainly Catholic Philippines. Its leaders have pledged allegiance to the Islamic State group, but analysts say they are more focused on kidnappings for ransom than setting up a caliphate. – Rappler.com