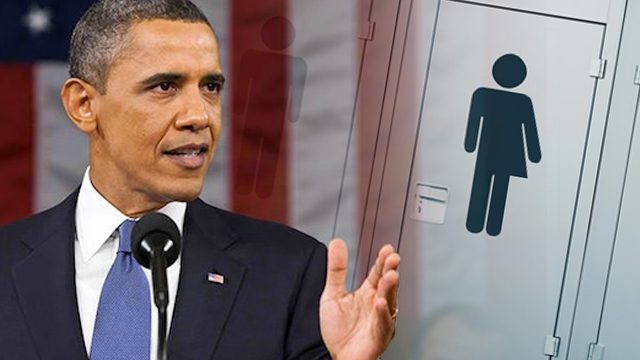 Facebook Twitter Copy URL
Copied
The move triggers an instant backlash from conservatives who perceive it as a threat to children's well-being, with a top Texas official refusing to comply with Obama's 'blackmail'

WASHINGTON DC, USA – President Barack Obama’s administration told schools across America on Friday, May 13 they must let transgender students use the bathroom of their choice, taking an intensifying battle over civil rights to the national stage.

Hailed by activists as a breakthrough, the move triggered an instant backlash from conservatives who perceive it as a threat to children’s well-being, with a top Texas official refusing to comply with Obama’s “blackmail.”

In a letter to public school districts and universities, the Justice and Education Departments laid out guidelines on creating a safe environment for transgender students, in accordance with existing laws on discrimination.

“There is no room in our schools for discrimination of any kind, including discrimination against transgender students on the basis of their sex,” said Attorney General Loretta Lynch, the top US lawyer who delivered a powerful speech in support of transgender Americans earlier this week.

“No student should ever have to go through the experience of feeling unwelcome at school or on a college campus,” added Education Secretary John King.

In particular, the letter asks schools to allow transgender students access to bathrooms matching their gender identity – rather than the sex on their birth certificate.

Although non-binding, schools that fail to comply with the directive could potentially face lawsuits or reduced federal aid.

The school guidelines come as the federal government is embroiled in a pitched legal battle with the state of North Carolina over a law requiring transgender people to use public restrooms corresponding to the sex on their birth certificate. Both the state and the Obama administration have filed dueling lawsuits.

Human rights campaign president Chad Griffin said the “groundbreaking” guidelines marked “a truly significant moment not only for transgender young people but for all young people.”

But conservative politicians and groups were swift in condemning the move.

In Texas, Lieutenant Governor Dan Patrick said his state was ready to forfeit billions of dollars in federal aid – most of it for free breakfast and lunch programs for students from financially disadvantaged families – rather than comply with the administration.

“So Barack Obama, if schools don’t knuckle down to force girls showering with boys and force 8-year-old girls to have to endure boys coming into their bathroom, he’s taking money from the poorest of the poor,” Patrick told reporters.

“Well, in Texas, he can keep his 30 pieces of silver. We will not yield to blackmail from the president of the United States… We will not sell out our children to the federal government.”

Texas public schools receive about $10 billion in federal funds over a two-year budget.

The Family Research Council, a conservative Christian group, said “the president’s decree should be resisted with every legal and moral instrument we have available to us in this country.”

The battle is part of a wider debate on equal rights in the United States, where a flurry of initiatives have targeted the lesbian, gay, bisexual, transgender (LGBT) communities since a historic Supreme Court decision last year legalized same-sex marriage nationwide.

In a CNN poll this week, 14% of respondents said they had a family member or close friend who was transgender, but the true number of transgender people in the United States is unknown – in part because many are not public about their identity.

The National Center for Transgender Equality estimated in 2009 that between 0.25% and 1% of the population is transsexual.

The group found that transgender students or those expressing gender non-conformity face “alarming” levels of violence and discrimination, with 78% reporting they were harassed, and 15% saying the bullying led them to leave a school.

The administration argues that gender identity is protected under Title IX, a provision under the Education Amendments of 1972 that bars schools receiving federal funding from discriminating based on a student’s sex.

Under the latest guidance, schools must “take prompt and effective steps” to end, prevent and remedy sex-based harassment based on a student’s actual or perceived gender identity, transgender status or gender transition.

White House spokesman Josh Earnest said the directive came in response to requests for guidance from schools across the country.

“It’s actually to ensure that our schools are as inclusive, and respectful and safe as they can possibly be,” he said. – Olivia Hampton, AFP/Rappler.com