‘El Chapo’ appeals extradition to US

May 28, 2016 8:45 AM PHT
Agence France-Presse
Facebook Twitter Copy URL
Copied
The appeal comes a week after the foreign ministry announced it had agreed to extradite Guzman, who escaped from a maximum-security prison in July 2015 and was recaptured in January 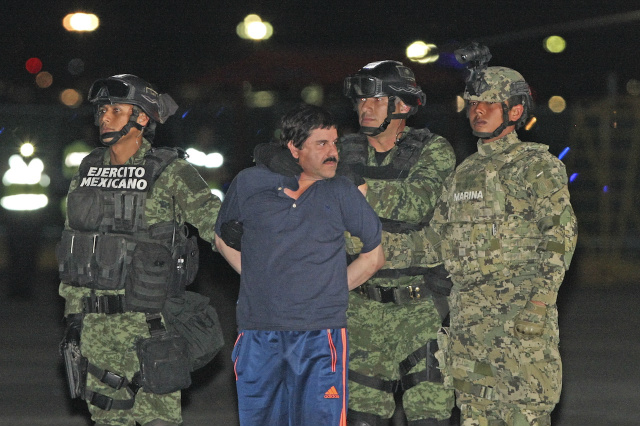 MEXICO CITY, Mexico – Mexican drug lord Joaquin “El Chapo” Guzman has appealed the government’s decision to extradite him to the United States to face narcotics and murder charges, officials and his lawyers said Friday, May 27.

Court documents said the appeal was filed Thursday, May 26, in Mexico City by two lawyers for Guzman, who is considered the world’s most wanted drug boss as leader of the Sinaloa cartel.

“We have filed an appeal against the unconstitutional decision by the ministry of foreign affairs, against those who are in a big hurry for ‘El Chapo’ Guzman to leave for the United States,” said one of the lawyers, Jose Luis Gonzalez, in a press conference.

The government has 48 hours to respond, officials said.

The appeal comes a week after the foreign ministry announced it had agreed to extradite Guzman, who escaped from a maximum-security prison in July 2015 – his second dramatic jailbreak – and was recaptured in January.

Police caught him after a colorful episode involving a US-Mexican soap opera actress and the Hollywood star Sean Penn, who met with Guzman in hiding.

The ministry said it had approved the extradition after receiving assurances from the US government that Guzman would not face the death penalty if convicted, since he could not receive such a punishment under Mexican law.

Guzman is wanted by courts in California and Texas.

President Enrique Peña Nieto’s government had previously balked at sending him to the United States.

But after the 59-year-old cartel boss was recaptured in January, Peña Nieto asked the attorney general’s office to expedite the extradition process. – Rappler.com