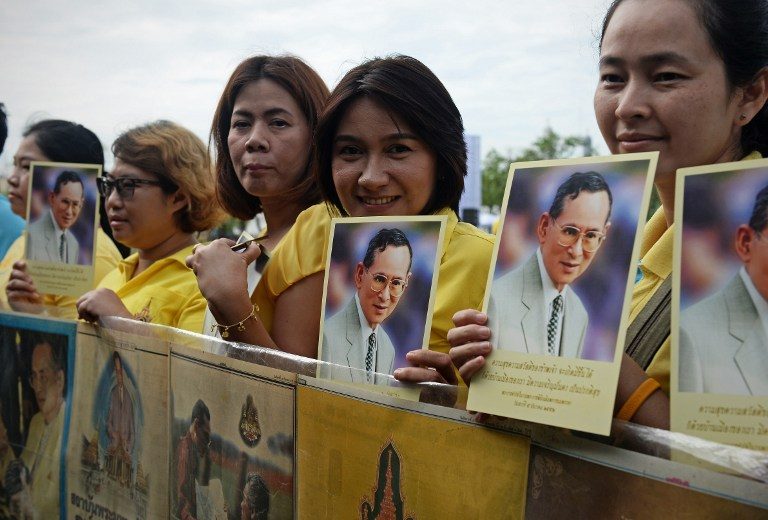 BANGKOK, Thailand – Hundreds of orange-robed monks led ceremonies Thursday, June 9, marking 70 years since Thailand’s King Bhumibol Adulyadej ascended to the throne following the mysterious death of his brother, as anxiety grows over the health of the ailing octogenarian.

The 88-year-old king is the world’s longest serving monarch and is seen as a unifying force in a nation bitterly divided along political lines.

But he is hospital-bound and underwent a heart operation on Tuesday, June 7, following months of treatment for various health problems – including water in the brain.

His health is of grave concern to Thais, who revere the king and see him as a constant in a turbulent country that has seen numerous coups and repeated rounds of deadly political violence.

Bhumibol’s image has been embossed by ritual and a publicity machine that sees giant portraits placed on streets and cinema-goers asked to stand for the royal anthem.

The leading royals are also shielded from criticism by a harsh royal defamation law that carries up to 15 years in jail for each charge.

The crown is also one of the world’s richest, with a multi-billion-dollar property and investment portfolio.

Hundreds of well-wishers, most decked out in the royal color of yellow, gathered outside the Grand Palace early Thursday as 770 monks began a day of celebration with an alms-giving ceremony.

“I want to make merit for the king to encourage him to have good health. That’s how I can show loyalty to him even though he can’t see it, that’s fine,” said 68-year-old Bangkok resident Chonmanee Smativat.

“I want him to know that we all love him. He has worked hard for Thais… since I was little I have seen how hard he works.”

Thais laud the king, who is known as Rama IX of the Chakri dynasty. They are taught from a young age about his well-publicized development schemes and economic strategies credited with lifting the kingdom out off poverty as many of its neighbors fell to communism.

But the kingdom is now cut in two with the arch royalist Bangkok elite and south pitted against the pro-democracy north and northeast, dominated by the political dynasty of billionaire ex-premier Thaksin Shinawatra.

Two coups have bloodied the Shinawatra clan over the last decade, the last in 2014 led by a Bangkok-based establishment that refuses to accept defeat at the polls.

The king has officially endorsed both coups.

Bhumibol ascended to the throne on June 9, 1946, after his brother was found dead from a gun shot wound at a Bangkok palace – a death the king would describe decades later in a BBC documentary as “very mysterious.”

Most Thais have known no other monarch.

Analysts attribute Thailand’s seemingly intractable political conflict to a behind-the-scenes scramble for power by the Thai elite to secure their future once his reign draws to an end.

Bhumibol has not been seen by the public since September when the palace released a video of him being taken in his wheelchair to visit a shop inside Bangkok’s Siriraj hospital.

His anointed successor is Crown Prince Maha Vajiralongkorn but he is yet to draw the same level of devotion as his father.

Questioning and criticism of the monarchy is banned and there has been a surge of lese majeste convictions – some as long as 30 years – since the army grabbed power in 2014. – Aidan Jones, AFP / Rappler.com