‘I’m with her’: Obama backs Clinton for president 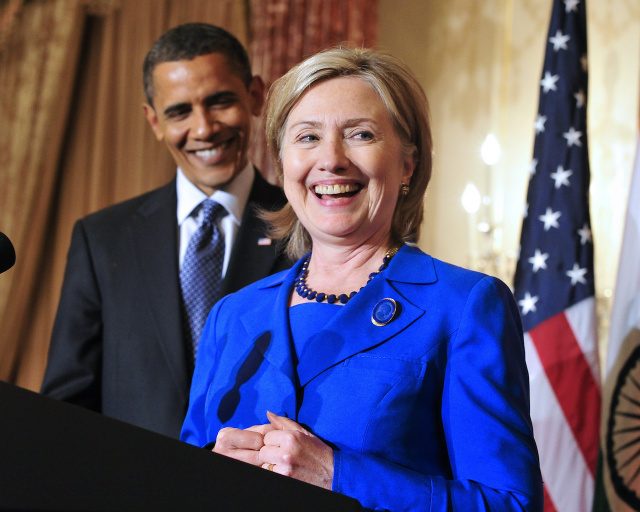 “Tens of millions of Americans made their voices heard. Today I just want to add mine,” Obama said in a video endorsement. “I’m with her.”

Obama’s endorsement, although long expected, is a shot in the arm for the Clinton campaign.

She has struggled for a year against leftist rival Bernie Sanders. The 74-year-old ran an unlikely grassroots campaign that swelled to a 12-million-strong movement.

“I don’t think there’s ever been someone so qualified to hold this office,” Obama said. (READ: Obama congratulates Clinton, will meet Sanders June 9)

The 44th president’s support gives Clinton a potent surrogate on the campaign trail.

Ex-presidents George W. Bush and Bill Clinton were so toxic by their 8th year in office that would-be successors kept them at arm’s length.

By contrast, Obama is still one of the country’s most popular politicians.

His approval ratings among black, Hispanic, young and liberal voters are stratospheric.

Clinton welcomed the vote of confidence: “Honored to have you with me, @POTUS. I’m fired up and ready to go!” she tweeted, echoing one of Obama’s own campaign rallying cries from 2008.

In that primary race, Obama bested Clinton and eventually became the first black president. They later made peace, as Clinton became his first secretary of state.

Now the 68-year-old Clinton is trying to make history of her own by becoming the first female commander in chief.

Standing in her way is bombastic businessman Trump. He has shocked the world by becoming the presumptive Republican presidential nominee.

“Obama just endorsed Crooked Hillary. He wants 4 more years of Obama — but nobody else does!” Trump tweeted.

Trump’s racially tinged rhetoric has split the Grand Old Party. A growing number of Republicans say they will not vote for him.

But “The Donald” appears to be uniting Democrats.

“We must come together to confront the fascist threat to our democracy presented by Donald Trump,” said Martin O’Malley, who had sought the Democratic nomination and on Thursday also endorsed Clinton.

Senator Elizabeth Warren, a darling of the left who had been pressed by supporters to mount her own White House bid, and who has since been discussed as a possible vice presidential pick, rounded out the high-profile Democratic endorsements.

“I am ready to get in this fight and work my heart out for Hillary Clinton,” the liberal stalwart told MSNBC, “and to make sure that Donald Trump never gets any place close to the white house.

The timing of Obama’s announcement appeared designed to push the process forward.

It came just an hour after he hosted Sanders in the Oval Office. Sanders has pointedly refused to bow out.

The two men strode along the West Wing colonnade laughing, a very public show of respect for Sanders’ insurgent bid.

The septuagenarian emerged from the White House vowing to continue his fight into next week – but also saying he would meet Clinton soon to find ways to work together.

Later in the day Sanders held a rally in the capital Washington, which hosts the final primary of the season Tuesday, June 14.

“We have shown the world that you can run a winning national campaign without being dependent on Wall Street, drug companies or big money interests,” Sanders told a crowd outside a stadium where he touched on his many campaign themes including alleviating income inequality and racial injustice.

Some Sanders supporters would like him to battle all the way to the party convention in Philadelphia next month. For weeks he has pledged to do so, but it was notable that in Thursday’s hour-long speech he made no mention of it.

For many, Clinton – a former first lady, secretary of state and US senator – is the epitome of a political establishment that has failed the people.

More pragmatic Sanderistas are pressing him to leverage his new-found political clout to shift the party to the left.

They would like to see the party platform overhauled and reforms to the next nominating process in 2020 – opening primaries to independent voters and curbing the role of bigwig “superdelegates.” – Andrew Beatty, AFP/Rappler.com