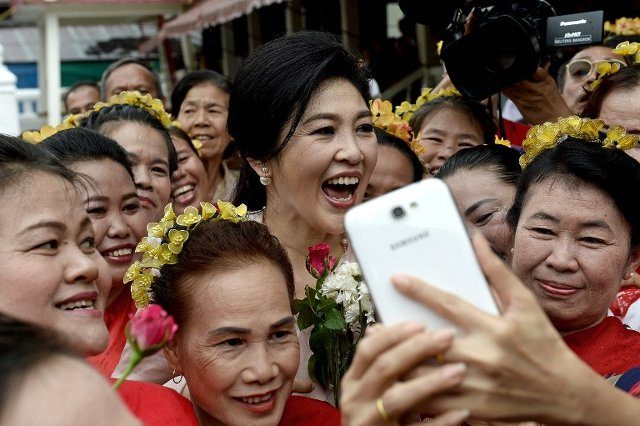 Facebook Twitter Copy URL
Copied
Yingluck's "yim su" tour – or fighting with smiles, as her aides dub it – carries a message of defiance to the hard-pressed northern portion of the country

PHRAE, Thailand – On a “fighting with smiles” tour by ex-premier Yingluck Shinawatra, selfies and symbols are the weapons of choice, showing adoring fans her family are still in Thailand’s treacherous political game – despite being hemmed in by the junta.

The Thai military has banned all political campaigning and Yingluck’s trips to the north and northeast are ostensibly billed as cultural tours to celebrate reaching 5 million Facebook fans.

But in a very Thai take on politics, each act on her tour is suffused with meaning, from ringing the “Bell of Freedom” at a Buddhist temple to speaking in the local dialect.

And the party faithful are lapping it up.

In Phrae, a lush, mountainous province in the Thai north a few hundred kilometres from the Shinawatra clan’s hometown, Yingluck was mobbed by legions of selfie-taking fans at every stop on Saturday — many wearing the ‘Red Shirts’ synonomous with her family.

There were tears, cheers and red roses given by supporters, many of whom ascribed their affection to Yingluck’s feminine qualities in a land where politics is broadly dominated by blustering middle-aged men.

“She’s beautiful and she has a good heart. I’m so happy to see her, hug her and take photos with her,” said Siriporn Thammawongsa, 59, at a lunch stop.

“I love how she managed the country as prime minister. If she can run the country again, it will go a long way,” she added.

But that is not on the cards anytime soon.

‘Not a political moment’

Yingluck was retroactively impeached after the May 22, 2014, coup and is banned from politics for 5 years.

She could be jailed for a decade if an ongoing negligence trial over a costly rice subsidy policy that funnelled cash to the Shinawatra’s poor farming base rules against her.

A new junta-scripted constitution will also straitjacket any politicians that emerge from future elections.

It is going before the Thai public in an August 7 referendum, although campaigning against it is banned in the bitterly divided country.

In that context Yingluck’s “yim su” tour – or fighting with smiles, as her aides dub it – carries a message of defiance to the hard-pressed northern portion of the country.

Not that she can admit it.

“No, this not a political moment,” the ex-premier told reporters after a blitz of photos with the party faithful at an ornate rural temple.

“I have been banned from politics for five years. All I can do is help the people in the ways I can, like this tour to promote the culture and travel.”

The wealthy Shinawatra family mop up votes in the northern portion of Thailand. Their parties have won every election since 2001.

That infuriates the Bangkok-based establishment, with its deep military and judicial ties, and arch-royalist southern supporters, who accuse the family of poisoning Thai politics with nepotism and populist policies such as the rice scheme.

They have hit back hard.

Billionaire ex-premier Thaksin Shinawatra – Yingluck’s elder brother – was booted by office in a 2006 coup and later convicted of graft, a charge that has seen him live in self-exile since 2008.

Two proxy premiers were taken out by the courts. Then in 2010 protests by the Shinawatra-aligned ‘Red Shirts’ against an appointed government were suppressed by the army, leaving more than 90 dead and over a thousand injured in downtown Bangkok.

Yingluck won an election the following year, but was ousted by the courts in early May 2014, and the rest of her administration was swept out by a coup a fortnight later.

The family and their Peau Thai party are now circling the wagons.

Yingluck, initially derided by critics as a political lightweight and a patsy premier for her exiled brother, is eyeing the long game as the Thai junta fumbles the economy and riles the public with curbs on freedom.

“The country looks like it is at peace, but they don’t know what the people really think,” she said.

They hope those attributes will help bridge the kingdom’s caustic political divide, which is worsened by uncertainty over the future once the reign of the country’s ailing 88-year-old monarch ends.

“I have followed her since day one,” said ex-lawmaker Khattiya Sawasdipol.

“She has changed a lot. To stand in her shoes is not easy, but she does it and it gives us all strength.” – Aidan Jones, AFP/Rappler.com