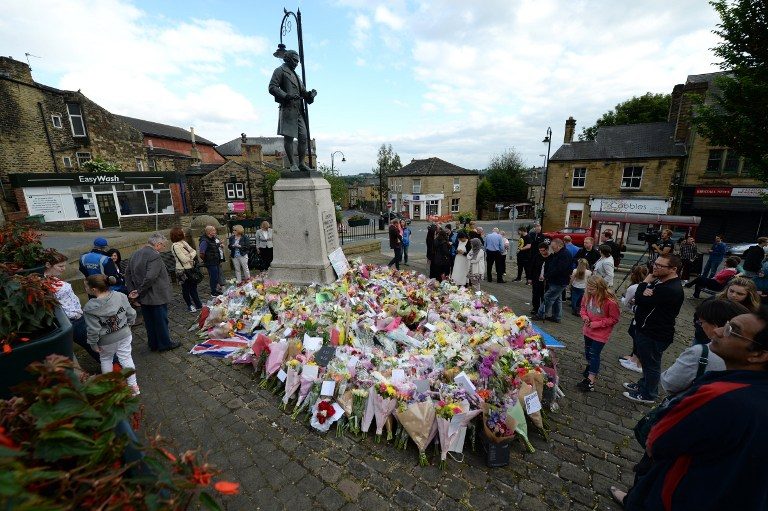 Facebook Twitter Copy URL
Copied
(UPDATED) 'If you're not sure, don't take the risk of leaving. If you don't know, don't go,' says British Prime Minister David Cameron on the Brexit referendum

Prime Minister David Cameron warned there was no “turning back” if Britons vote to leave the European Union, saying it would be a “humiliation” for the nation.

Her alleged killer, 52-year-old Thomas Mair, shouted “Death to traitors, freedom for Britain,” when he appeared in court on Saturday, June 18.

Prayers were said for Cox, a 41-year-old mother of two, at a church service Sunday less than a kilometer away from the scene of her murder in the northern English village of Birstall.

Cox, an active Remain campaigner, was stabbed and shot on Thursday, June 16, in an attack that shocked the country, the first murder of a sitting British lawmaker since 1990.

“Her humanity was powerful and compelling and we would do well to recognize her as an amazing example: a 21st century Good Samaritan,” Reverend Paul Knight said at the church service.

After a 3-day pause, political leaders hit the stump again on their final push for votes in a referendum that will shape not only the future of Britain but also the EU.

The What UK Thinks website’s average of the last 6 polls, conducted between June 10 and Saturday, put the Remain and Leave camps level at 50-50, excluding undecided voters.

The Leave camp had been a few percentage points ahead in recent polling, but fresh surveys showing a rise in support for remaining brought the average neck-and-neck.

A Survation poll conducted on Friday and Saturday put Remain at 45% and Leave at 42% – the reverse of its findings on Thursday.

“We did have momentum until this terrible tragedy,” he told ITV television.

The Sunday Mirror newspaper said there was a “dramatic swing in ‘mood'”, calling it “The Jo effect”, citing its own ComRes polling.

Cameron said Britain was facing an “an existential choice” from which there would be “no turning back.”

“If you’re not sure, don’t take the risk of leaving. If you don’t know, don’t go,” he wrote in The Sunday Telegraph newspaper.

“It would be a one-off and permanent diminution in our standing in the world; an abject and self-imposed humiliation for a proud and important country like ours.”

His finance minister George Osborne told ITV television that Britain would be “a lot poorer” outside the EU, saying the economy could shrink by at least 5% to 6%.

“You can’t predict the enormous uncertainty that exiting the EU means for Britain.”

While the Remain camp has tried to focus on the economy, the Leave campaign has made a key issue out of EU mass immigration to Britain in the increasingly divisive campaign.

Main opposition Labour leader Jeremy Corbyn, who backs the Remain campaign, hit out at the EU’s “appalling” treatment of Greece and told BBC television “I don’t think you can have” an upper limit on migration “while you have the free movement of labor.”

Osborne said he hoped Cox’s death would lead to “a less divisive political debate in our country” with “less baseless assertion and inflammatory rhetoric and more reasoned argument and facts.”

Mair, who has been charged with her murder, was remanded in custody and is due to appear in court again on Monday, June 20. A psychiatric report has been requested.

Meanwhile, Britain’s Sunday newspapers picked sides in their final editions before the vote.

The Mail on Sunday and The Observer gave their support to the Remain camp, while The Sunday Times and The Sunday Telegraph broadsheets backed quitting the EU.

The Mail warned it was “not the time to risk the peace and prosperity” of the UK.

“Those who would have you believe in the plucky Little England of the past are selling a dangerous illusion,” it said.

The Observer said: “For an international, liberal and open Britain, we need to be part of the EU.”

The Sunday Telegraph however, declared that the EU “belongs to the past.”

The Sunday Times said “Yes, we must be prepared for difficulties, but we should hold our nerve” in voting Leave. – Rappler.com