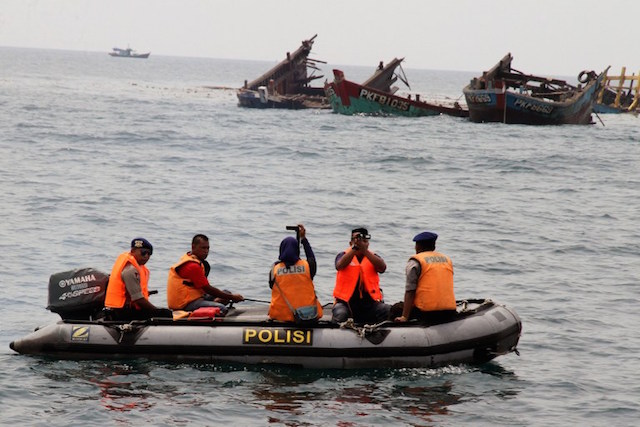 The Indonesian navy insisted no one was hurt when it detained 7 sailors on a Chinese-flagged vessel after firing warning shots.

It was the third such skirmish in recent months between Indonesia and China near the Natunas, which are west of Borneo, as tensions rise between Beijing and several nations over its growing assertiveness in the disputed South China Sea.

Unlike some of its Southeast Asian neighbors, Indonesia does not dispute ownership of reefs or islets in the sea with China.

But Beijing’s claims to fishing rights near the Natunas and some 3,000 kilometers from its mainland appear to overlap with Indonesia’s exclusive economic zone around the islands.

Indonesian Fisheries Minister Susi Pudjiastuti, who is leading a campaign to crack down on illegal fishing, defended the navy’s actions.

“The Indonesian navy made the right move by maintaining the sovereignty of our seas,” she tweeted. “The shooting was definitely according to procedure.”

She added that “stealing fish is a crime. It is impossible that there is an agreement between countries that allows for stealing fish”.

“The president ordered him to defend Indonesia’s territorial sovereignty that we have struggled to build up since our independence,” he said.

But he added the president wanted this to be done without “affecting good relations”. Indonesia’s aggressive crackdown on illegal fishing, which began in 2014, has riled several of its neighbors.

“China and Indonesia have overlapping claims for maritime rights and interests,” in the area, she told a regular briefing on Monday.

She did not provide a direct answer when asked whether those fishing grounds overlapped with Indonesia’s exclusive economic zone.

Navy vessels pursued and fired several warning shots, until eventually a Chinese-flagged ship was stopped and boarded, it said.

In March Chinese coastguards rammed a boat detained near the Natunas and helped it escape as the Indonesians towed the vessel to shore.

Last month, the Indonesian navy opened fire on a Chinese trawler near the islands and seized the vessel. Beijing said it protested the move.