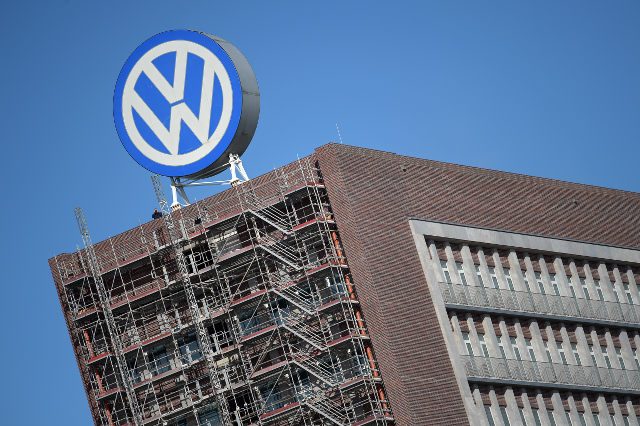 Facebook Twitter Copy URL
Copied
(UPDATED) 'While this announcement is an important step forward, let me be clear, it is by no means the last,' says US Deputy Attorney General Sally Yates

SAN FRANCISCO, USA (UPDATED) – Volkswagen has agreed to a record $15 billion US payout over its emissions-cheating diesel cars, pledging to buy back or fix vehicles that tricked pollution tests, and pay each owner up to $10,000.

The German auto giant agreed in a settlement filed in federal court Tuesday, June 28, to pay up to $14.7 billion to American consumers and US authorities, and announced a separate deal to pay $603 million to settle consumer protection claims from US states.

The huge settlement, the biggest in a US air pollution probe, only partly resolves claims against the automaker, embroiled in a months-long scandal that has roiled the industry and tarnished the reputation of the company and its “green” initiatives.

Under the deal, Volkswagen will pay a maximum of $10 billion to compensate owners.

Additionally, a $2.7 billion environmental penalty will go into a trust fund to help curb pollution around the United States.

The company also agreed to invest $2.0 billion “to create infrastructure for and promote public awareness of zero emission vehicles,” the court filing showed.

The settlement, which must be approved by a federal judge in San Francisco overseeing the litigation, could affect some 480,000 owners of Volkswagens and Audis with 2.0-liter diesel engines.

Volkswagen must recall or fix at least 85% of the affected cars or pay additional amounts into the mitigation trust fund, officials said.

US Deputy Attorney General Sally Yates told a news conference in Washington that the investigation is not yet over.

“This partial settlement marks a significant first step towards holding Volkswagen accountable for what was a breach of its legal duties and a breach of the public’s trust,” Yates said.

“And while this announcement is an important step forward, let me be clear, it is by no means the last.”

She added that “our criminal investigation is active and ongoing.”

Yates noted that the settlement does not cover civil penalties for violations of the Clean Air Act or a parallel probe into the company’s 3.0-liter diesel engines.

She said however the deal would offer compensation to consumers and help slash air pollution.

“We can’t undo the damage that Volkswagen caused to our air quality but what we can do is offset that damage by reducing pollution from other sources,” she said.

In a statement, the German group said the settlement in federal court and the deal with 44 US states was part of its efforts to win back consumer confidence.

“We know that we still have a great deal of work to do to earn back the trust of the American people. We are focused on resolving the outstanding issues and building a better company that can shape the future of integrated, sustainable mobility for our customers.”

Jessica Caldwell at the auto research firm Edmunds.com said the settlement could help the company’s efforts to rebound.

“Volkswagen has to swallow a $15 billion pill, but it needs to take this medicine in order to move on,” she said.

“The good news is that history is on Volkswagen’s side. Other automakers have successfully weathered their own high-profile scandals and VW has the resources and infrastructure in place to do the same.”

Volkswagen admitted in September that it had installed software in the vehicles to circumvent tests for emissions, enabling the vehicles to spew up to 40 times the permitted amounts of nitrogen oxides.

The affected vehicles include 2009 through 2015 Volkswagen TDI diesel Jetta, Passat, Golf, and Beetle as well as the TDI Audi A3.

The auto giant is facing similar charges and litigation in Europe and elsewhere for the same issues.

Tuesday’s settlement filed with Judge Charles Breyer would settle claims from the US government as well as a large number of plaintiffs including owners, lessees and dealers.

Volkswagen agreed under the deal to buy back the emissions-cheating vehicles at their market prices before the scandal broke late last year, at prices ranging from $12,475 for the 2009 Jetta sedan to more than $44,000 for some 2015 Audi models.

The owners also have the option of letting Volkswagen modify the cars to meet US pollution standards, if a fix is approved by environmental officials.

In either case, the owners would also get a cash settlement ranging from $5,100 to $10,000 depending on the vehicle.

The deal also allows consumers who leased one of the affected vehicles to have the lease terminated at no cost, and calls for Volkswagen to pay off loans still owed by some owners. – Rappler.com