Abe, in power since late 2012, has yet to achieve a strong recovery in the world’s third-largest economy through measures centered on massive easy money and other steps – so-called Abenomics.

Voters have also expressed misgivings about his cherished dream of making changes to the country’s constitution, imposed by the United States after Japan’s defeat in World War II and which prohibits it from waging war.

But his Liberal Democratic Party (LDP) and the Buddhist-backed Komeito gained as public confidence in the ability of opposition parties was even lower.

Abe seized on the election results for half the seats in parliament’s upper house as a vote of confidence.

“I’m relieved that we were able to secure more than… half the seats contested,” he told private broadcaster TBS television about two hours after polls closed at 8 pm (1100 GMT).

“I think (voters) told us to firmly accelerate Abenomics.”

The LDP and Komeito were set to take at least 66 of the 121 seats up for grabs – half the chamber’s total – up from 59 previously, public broadcaster NHK said.

Its projection and similar estimates by other media were based on incoming results and their own analysis.

Final numbers were not expected until Monday, July 12, at the earliest but the trend was clear.

The two parties control 77 seats from the other half of the chamber, which was not contested Sunday, meaning that they are set to increase their majority in the 242-seat body.

The House of Councilors, as the upper house is formally known, is the less powerful chamber in Japan’s bicameral parliament, and half its seats come up for election every 3 years.

NHK and other media also said the LDP was in reach of a majority on its own in the body which, if achieved, would be its first in 27 years. 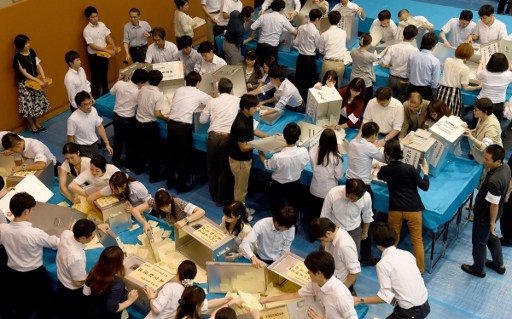 Shinichi Nishikawa, professor of political science at Meiji University in Tokyo, said the result, though undeniably a win, was no mandate.

“Considering the current negative signs for the economy, we can say many voters reluctantly voted for ruling candidates due to the weakness of the opposition,” he told AFP.

Abe went into the vote hoping that the coalition and a loose group of hawkish conservatives from smaller parties could grab a two-thirds majority in the upper house, which they already have in the lower chamber – thus giving him the strength to start amending the constitution.

The House of Representatives, the lower chamber, sits for a 4-year term unless dissolved early. The last election was held in December 2014.

Media analyses of Sunday’s vote said it appeared that the parties favoring constitutional revision could reach such a super majority in the upper chamber, though votes were still being counted.

The constitution is deplored by nationalists as a relic from Japan’s World War II defeat. But many Japanese staunchly embrace its pacifist ideal.

And while the LDP’s own draft amendment plan calls for keeping the war-renouncing spirit of the document, it wants to remove language it sees as infringing on the country’s means to defend itself.

Abe was bombarded by questions on TBS about what the election result means for any attempt at revision.

But he played down the issue, even suggesting any change was unlikely during his remaining time in office.

“I don’t think voters were asked to express pros and cons on the constitution in this election,” he said.

“My term lasts for two (more) years, but it is also the goal of the LDP,” he said of amending the country’s basic law. “We will sit down and tackle the issue.”

Any legislation that mustered the two-thirds majorities needed to pass both houses of parliament, however, would face a national referendum, currently seen as a difficult hurdle to overcome.

The Japanese public is largely supportive of the constitution as it stands and will probably show resistence to attempts to tinker with it, said Sadafumi Kawato, professor of politics at the University of Tokyo.

“A two-thirds majority doesn’t mean that Abe’s government can tackle the amendment to the constitution immediately.” – Rappler.com