Facebook Twitter Copy URL
Copied
In Indonesia, where drug laws are among the strictest in the region, drug convicts get a respite once a year.

JAKARTA, Indonesia – Mutiya’s husband used to sell lottery tickets in Jakarta, while delivering drugs on the side for extra money. He is what they call in Indonesia, a carrier.

He was caught by the police 3 years ago, and faces two more years behind bars.

Mutiya, 34, who like most Indonesians go only by one name, is a mother to three teenage boys and a four-year-old daughter.

In between fulfilling the roles of both mother and a father, she works as a store clerk in Jakarta to sustain her household.

“My children miss their father and always ask to visit him on regular days, but we don’t get to be in the same room during those visits. So Eid al-Fitr is a very special time for us,” Mutiya said, referring to the end of the holy month of Ramadan.

As she does every year, Mutiya prepared special Indonesian snacks for her husband. The family shared the meal together inside the prison walls – a rare treat in Indonesia where drug convicts are given little mercy, and sometimes executed.

“I hope my husband’s sentence gets reduced and he is released early from prison,” said Mutiya, when asked what she prayed for during this Ramadan.

LP Cipinang Narkotika is a prison that caters specifically to drug convicts – including sellers, carriers, and users. The prison is heavily guarded and has a rehabilitation center.

It houses 3,005 male prisoners, of which 50 are foreigners, mainly from Iran, Pakistan and the Netherlands.

The prison expects around 10,000 visitors during the 3-day celebration of Eid al-Fitr. This is the only time when families can take special meals for inmates and meet them freely within the compounds of the prison. 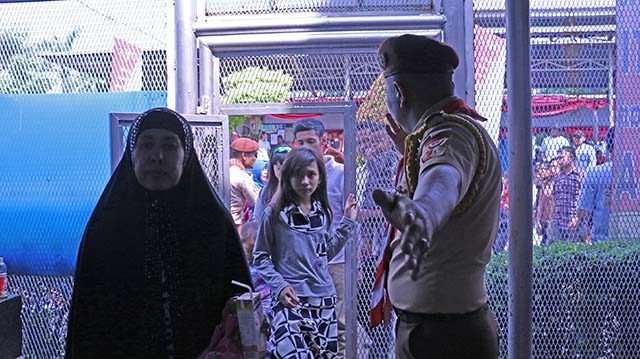 The prison is divided into 5 blocks and has a fully equipped bakery and sports facility.

Security is tightened during this period as visitors go through multiple security checkpoints. No cell phones or bags are allowed inside and guards inspect all food items individually.

Inside the prison, during this time, a band, comprised of prisoners, play Indonesian pop songs on a constructed stage. Families circle around the stage and request for special songs from the band.

On the other side, a prisoner-run canteen sells fried snacks and baked goods including cakes.

The prison is transformed into a mini fair as families exchange greetings. With so many people inside, colored wristbands are used to distinguish between inmates and visitors – orange for visitors and black for inmates. According to government estimates, 4.5 million are active drug users in the world’s largest archipelago, which is home to about 250 million people.

Two years ago, Nunung, 32, received a phone call from her brother’s friend saying her brother was arrested for drug use and thrown into prison.

She was unaware her brother had a drug problem even though they shared everything with each other.

“In my family of 8 siblings, I was very close to my older brother. He was like a role model. We shared everything with each other. I miss that relationship,” she said.

In Indonesia, the sentence varies between 4 years to life sentence depending on drug type and quantity of possession. “We try to engage the prisoners in our rehabilitation center during the day by providing social skills like baking, handicraft making, music lessons, salon and masseuse training,” said Wahyu Indarto, an officer at the prison.

Earlier this year the Indonesian government announced the execution of 16 prisoners on death row after the holy month of Ramadan, which concluded last week.