Jul 13, 2016 11:01 AM PHT
Agence France-Presse
Facebook Twitter Copy URL
Copied
(UPDATED) Beijing insists that it had sovereignty over the South China Sea, defying an international tribunal ruling that its claims to a vast swathe of the waters had no legal basis 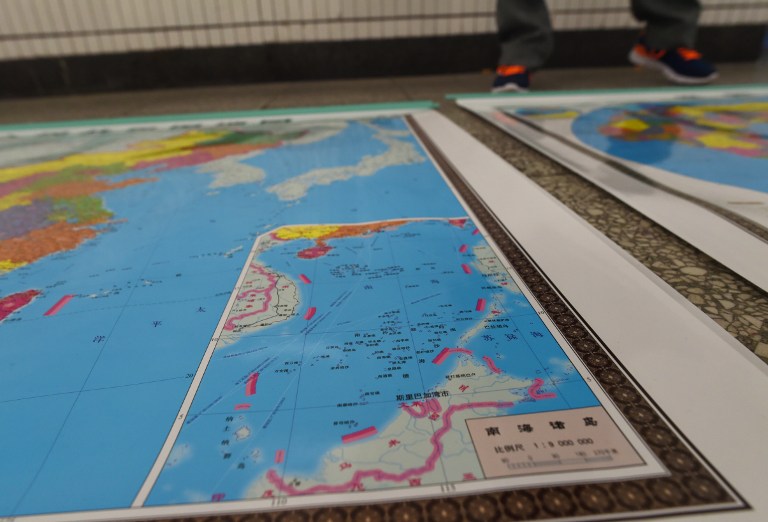 BEIJING, China (UPDATED) – Beijing “has the right” to declare an air defense identification zone over the South China Sea, it said Wednesday, July 13, as it stepped up denunciations of international tribunal that ruled against its expansive claims in the strategic waters.

Whether Beijing set up such a zone – which would require civilian aircraft to identify themselves to military controllers – depended on “the level of threat we receive”, said vice foreign minister Liu Zhenmin.

China reasserted its claims to the area, which extend almost to the coasts of neighboring states, after the Permanent Court of Arbitration (PCA) tribunal in The Hague backed the Philippines’ case that there was no legal basis for them.

Liu described the ruling as “a piece of waste paper” at a press conference, alleging the tribunal had been “manipulated”.

The 5 judges who ruled in the case “made money from the Philippines”, Liu said, adding “and maybe other people gave them money too.”

He stressed that 4 of the judges were from EU countries, with the Ghanaian chairman a longtime resident of Europe.

“Are these kind of judges representative?” he asked rhetorically. “Do they understand Asian culture?”

A Japanese former president of the International Tribunal on the Law of the Sea, Shunji Yanai, had “manipulated the entire proceedings” from behind the scenes, he alleged.

Yanai, a former Japanese ambassador to South Korea and the US, stepped down from his role in 2014.

Beijing boycotted the PCA proceedings, saying the court had no jurisdiction to rule on the issues, and has mounted a huge diplomatic and publicity drive to try to discredit the tribunal and its decision.

Liu was speaking at the launch of a government white paper on the issue.

China was “the first to have discovered, named, and explored and exploited” islands in the sea and their surrounding waters, the document said.

It was in direct contradiction to the ruling in The Hague on Tuesday, July 12, which said that “there was no evidence that China had historically exercised exclusive control over the waters or their resources”.

The UN-backed tribunal also said that any “historic rights” to resources in the waters of the South China Sea were “extinguished” when China signed up to the UN Convention on the Law of the Sea (UNCLOS).

As such, it said there was “no legal basis” for China to claim historic rights to resources within its so-called nine-dash line demarcating its territorial claims.

China had no possible entitlement to areas within the Philippines’ exclusive economic zone, it added.

“I hope you put this decision in the wastepaper basket, or on the bookshelf, or filing cabinet and keep it there,” Liu told reporters.

He also called for renewed dialogue with the Philippines – on the basis of recognition of China’s historical claims.

Chinese state-run media on Wednesday denounced the ruling as biased and invalid and urged Beijing to “safeguard” China’s territorial sovereignty.

The People’s Daily, the ruling Communist Party’s mouthpiece, branded the award and the request by the former Philippine administration of Benigno Aquino to set up the tribunal as being “manipulated and instigated by external forces”.

It added Beijing will “take all measures necessary” to protect its sovereignty and rights.

The English-language China Daily blasted the tribunal’s award as “outrageously one-sided” and “inherently biased, unjust, and thus not executable”.

“Beijing certainly should, and has to, ready itself for worst-case scenarios, including potential military collisions,” it said.

At the briefing, Liu said that “Chinese navy ships operating in the South China Sea is normal, because it is our sea”. – Rappler.com