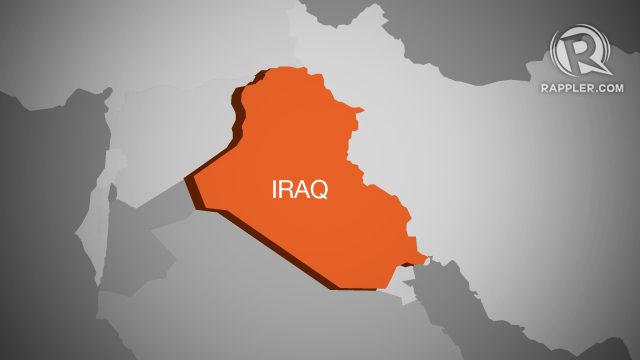 Facebook Twitter Copy URL
Copied
(UPDATED) ISIS issues a statement saying an Iraqi carried out a suicide bombing targeting a checkpoint, but gives the location of the attack as Shaab, an area adjoining Husseiniyah

BAGHDAD, Iraq (UPDATED)  –  A suicide bomber detonated an explosives-rigged vehicle at a checkpoint near Baghdad on Wednesday, July 13, killing at least 4 people, officials said, an attack claimed by the Islamic State group.

The bombing at a checkpoint leading to the Husseiniyah area, northeast of the capital, also wounded 21 people, the officials said.

ISIS issued a statement saying an Iraqi carried out a suicide bombing targeting a checkpoint, but gave the location of the attack as Shaab, an area adjoining Husseiniyah.

The blast is the latest in a series of deadly attacks in and around Baghdad, including a bombing in a crowded shopping district on July 3 that killed 292 people, one of the deadliest ever to hit Iraq.

A few days later, terrorists attacked a Shiite shrine in Balad, north of Baghdad, killing 40 people, and on Tuesday, a suicide bomber struck a market near the capital, killing at least 7 people.

ISIS overran large areas north and west of Baghdad in 2014, but has since lost significant ground to Iraqi forces backed by US-led air strikes, training and other assistance.

The Sunni extremist group has responded to the battlefield setbacks by striking civilians, particularly Shiites, and experts have warned there may be more bombings as the jihadists continue to lose ground. – Rappler.com