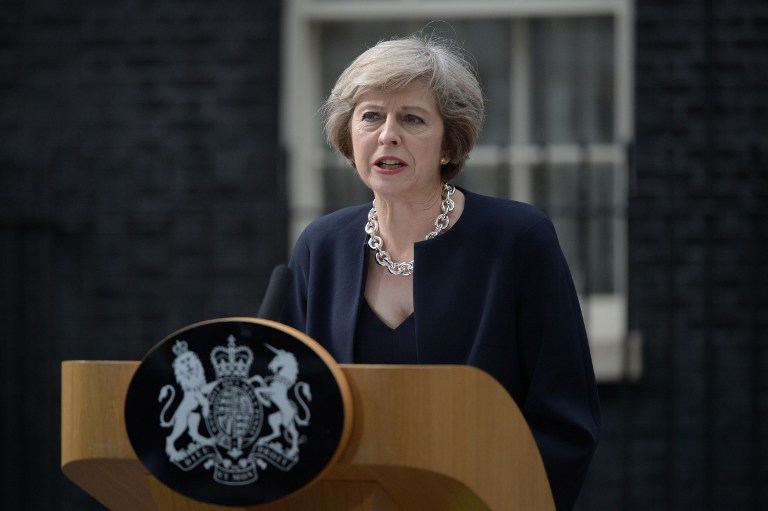 LONDON, United Kingdom – Theresa May took over as Britain’s new prime minister on Wednesday, July 13, charged with pulling the country out of the EU, and sprung a surprise by making top Brexit campaigner Boris Johnson foreign secretary.

May replaced David Cameron after he stood down following the seismic June 23 vote to leave the European Union, which sparked 3 weeks of intense political turmoil and volatility on the financial markets.

May, who had supported Britain’s continued EU membership, moved quickly to heal divisions sparked by the referendum by appointing leading “Leave” campaigner Johnson to a senior cabinet post.

But the decision to name Johnson, the eccentric former London mayor, to the high-profile post of representing Britain to the rest of the world is likely to cause controversy.

Johnson led the Brexit camp to victory, antagonizing many EU leaders in the process, but dismayed supporters by backing out of the race to succeed Cameron at the last minute.

May ditched finance minister George Osborne, Cameron’s closest ally, and appointed former foreign secretary Philip Hammond to the job instead, charging him with the task of calming fears over the potential damage of leaving Britain’s biggest market.

EU leaders are pressing for a swift divorce following the Brexit vote, which sent shockwaves around the world.

May had a phone call late Wednesday with German Chancellor Angela Merkel, who invited her to visit, followed by calls with the French and Irish leaders, a Downing Street spokeswoman said.

May emphasized her commitment to delivering Brexit but “explained that we would need some time to prepare for these negotiations and spoke of her hope that these could be conducted in a constructive and positive spirit”, the spokeswoman said of the calls.

May, the second female prime minister after Margaret Thatcher, has repeatedly said that “Brexit means Brexit”.

But European Commission president Jean-Claude Juncker insisted the issue must be addressed “soon”, a sentiment echoed by French President Francois Hollande in his call with May.

After formally being invited to form a government by Queen Elizabeth II, May arrived at her new Downing Street residence with a promise to tackle “burning injustice”.

“Following the referendum we face a time of great national change,” the 59-year-old told reporters, flanked by her banker husband, Philip.

“As we leave the European Union we will forge a bold new positive role for ourselves in the world. And we will make Britain a country that works not for a privileged few but for everyone of us.”

May said keeping the “precious” United Kingdom together was also a priority after the referendum, with the devolved Scottish government threatening a second independence vote.

Johnson said on his appointment: “We have a massive opportunity in this country to make a great success of our new relationship with Europe and with the world.”

May’s appointment after a brief leadership contest in the governing centre-right Conservative Party brings some stability following a period of political disarray, which has also sparked a leadership challenge in the main opposition Labour Party.

Investors will be watching her first days in office closely but with greater optimism as the value of the pound, which fell by up to 15 percent against the dollar after the Brexit vote, rallied in recent days.

On Thursday, July 14, the Bank of England will announce whether it will cut interest rates for the first time in more than seven years to curb the economic fall-out from Brexit.

May is something of an unknown quantity internationally, but European Council president Donald Tusk said he looked forward to a “fruitful working relationship” with her.

May campaigned for the leadership as a safe pair of hands, after spending six years as home secretary, one of the toughest jobs in British politics.

‘I was the future, once’

Earlier, Cameron had made his final statement in Downing Street, flanked by his wife Samantha and three children, where he wished Britain “continued success”.

“It’s not been an easy journey and, of course, we’ve not got every decision right but I do believe today our country is much stronger,” the 49-year-old said.

Cameron had called the referendum and campaigned to stay in the EU in a bid to try to heal divisions in the Conservative ranks. He gambled, and he lost.

In his final question and answer session in the House of Commons, Cameron echoed a line he used to launch himself with in 2005, taunting Labour’s then-prime minister Tony Blair.