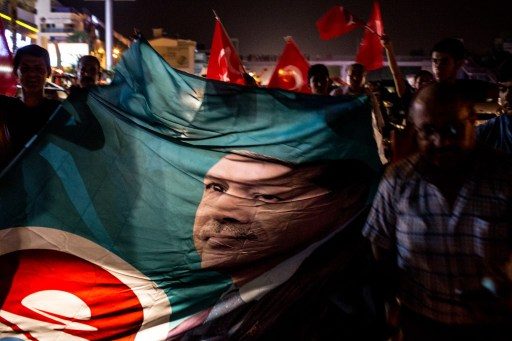 The United States, Russia, NATO and the European Union appealed for stability, with US President Barack Obama calling on all parties in Turkey to back the “democratically-elected” government.

Detailing a call between Obama and Secretary of State John Kerry, the White House said both agreed that “all parties in Turkey should support the democratically-elected government of Turkey, show restraint, and avoid any violence or bloodshed.”

UN chief Ban Ki-moon meanwhile lashed out against the attempted coup, as he called for civilian rule to be maintained.

“Military interference in the affairs of any state is unacceptable,” Ban said in a statement.

“Turkey is a key partner for the European Union. The EU fully supports the democratically elected government, the institutions of the country and the rule of law,” they said in a joint statement with EU foreign policy head Federica Mogherini.

“We call for a swift return to Turkey’s constitutional order.”

Kremlin spokesman Dmitry Peskov told reporters that Moscow was “deeply concerned” about the situation, with President Vladimir Putin being kept up to date by the foreign ministry and intelligence services.

Russian Foreign Minister Sergei Lavrov had earlier called on Turkey to avoid all “bloodshed” and insisted that the problems in the country be resolved “in accordance with the constitution.”

Turkey will now likely dominate an EU foreign ministers’ meeting on Monday, July 18, which will also be attended by Kerry. (READ: ‘Situation largely under control’ after Turkey coup attempt – PM)

Ankara in March signed a controversial deal with the European Union aimed at stemming migration to the continent, and has recently mended ties with Russia after a major diplomatic crisis.

NATO chief Jens Stoltenberg called for “calm and restraint, and full respect for Turkey’s democratic institutions and its constitution,” adding that the country was “a valued NATO ally”.

Obama, like other Western leaders, has repeatedly expressed concern about authoritarian steps taken by Erdogan’s government.

But the country is a key NATO ally and part of the coalition fighting ISIS in neighboring Syria and Iraq. The US has military assets at Incirlik Air Base, carrying out strikes against the jihadists.  (READ: Defiance turns to panic in coup-hit Istanbul)

‘No impact’ on anti-ISIS strikes

The ongoing coup attempt is not affecting operations targeting ISIS, and American forces will continue flying missions from a key airbase there, a US defense official said Friday.

The situation “has no impact on counter-ISIL operations from Incirlik Air Base in Turkey,” the official said, speaking on condition of anonymity, and using another name for IS.

The Philippine government is monitoring the situation in Turkey.

The French Foreign Ministry meanwhile called for “the avoidance of violence and respect for democratic order,” in an appeal echoed by German Chancellor Angela Merkel.

“Support to the elected (Turkish) government,” a spokesman for Merkel said. “Everything must be done to protect human lives.”

“Stability, democracy and the security of the Turks are the priority,” Zarif said, according to the Iranian government website, as he stressed “the need to preserve unity” in the country.

Iran and Turkey have been at loggerheads in regional conflicts including Syria, where they back opposing sides in the 5-year civil war.

Tsipras’ diplomatic advisor sent the “message of support for democracy in Turkey” to his counterpart in the crisis-hit nation, the source said.

The two leaders were set to speak by telephone later Saturday.

Television pictures showed tanks deployed outside Ataturk airport in Istanbul. Reports said that flights into the airport had been halted.

Greece’s Aegean Airlines confirmed it had cancelled Saturday’s flights to Istanbul and the coastal city of Izmir.

German carrier Lufthansa said it had delayed its flights to Turkey “for up to 12 hours”. – with a report from Pia Ranada/Rappler.com