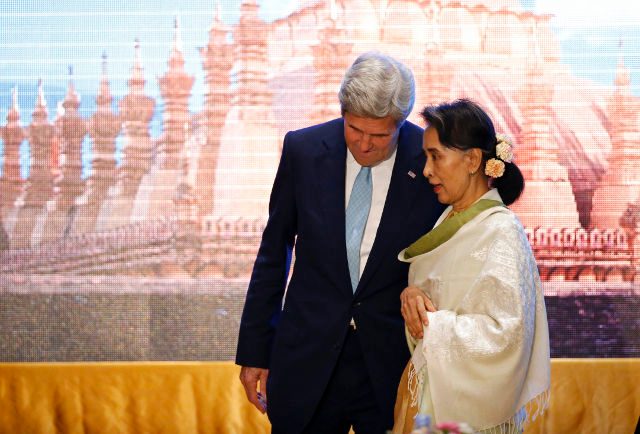 VIENTIANE, Laos – The Philippines and China should “turn the page” and hold talks over contested areas of the South China Sea after a tribunal shot down Beijing’s claims to the strategic waterway, US Secretary of State John Kerry said on Tuesday, July 26.

Relations between China and the Philippines hit a nadir earlier this month after Beijing refused to recognize a UN-backed ruling invalidating its claims to much of the sea.

The Philippines, which says it owns areas claimed by China, took the case to a Hague-based tribunal for arbitration.

Kerry reiterated Washington’s stance that the tribunal’s decision to favor the Philippines was binding, but added that it was time to seek new ground.

“I would encourage President Duterte to engage in dialogue, in negotiations,” Kerry told reporters in Laos, referring to the tough-talking new Philippines leader.

Kerry is due to fly to Manila for talks with Duterte later Tuesday.

Kerry’s call for fresh talks between Manila and Beijing comes at the request of his Chinese counterpart Wang Yi.

“The foreign minister said very clearly the time has come to move away from public tensions and turn the page,” Kerry told reporters.

The two envoys met on the sidelines of a regional security forum of the 10-member Association of Southeast Asian Nations (ASEAN) that has been dogged by the issue of the South China Sea.

The Philippines had been expected to push for the bloc to support the tribunal ruling in a punchy joint-statement.

But the bloc shied away from a diplomatic confrontation with China.

Philippine Foreign Secretary Perfecto Yasay told reporters that he supported that approach, describing the tribunal case as a dispute just between Beijing and Manila.

“The other countries are not part of our filing of the case before the arbitral tribunal so why would we insist that it be put in the ASEAN statement,” Yasay said.

ASEAN member states span communist autocracies such as Laos and Vietnam, the tiny Islamic sultanate of Brunei and populous democracies like Indonesia and the Philippines.

It works on the basis of consensus diplomacy.

But critics have slammed the grouping for failing to present a strong front against China’s aggressive divide and rule policy among its neighbors. – Rappler.com