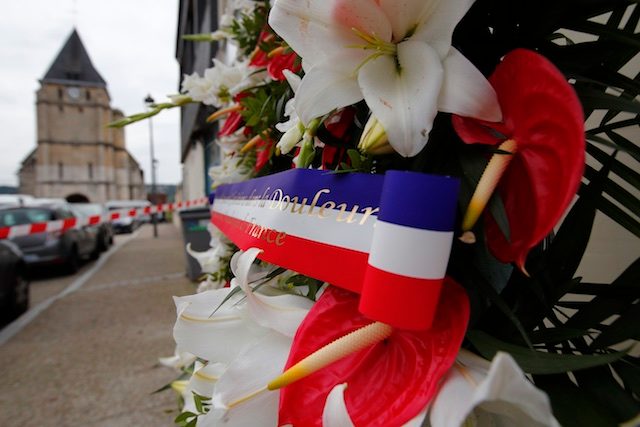 Facebook Twitter Copy URL
Copied
Residents of Saint-Etienne-du-Rouvray are struggling to come to terms with the bloodshed in their small town, so far from France's tourist hubs

Hollande met with top religious leaders as a violence-weary France mourned Tuesday’s attack, which came less than two weeks after the Bastille Day truck massacre that killed 84 people in the southern city of Nice.

France’s large Catholic community was in shock after two men stormed into a church in the northern town of Saint-Etienne-du-Rouvray during morning mass and slit the 86-year-old priest’s throat at the altar. Another man was left seriously injured in the attack.

One of the attackers was identified as French jihadist Adel Kermiche, 19, who was awaiting trial on terror charges and had been fitted with an electronic tag despite calls from the prosecutor for him not to be released.

“We are stunned, because we did not know it was dangerous to be a priest these days in France,” said Pierre Amar, a priest from Versailles near Paris.

Residents of Saint-Etienne-du-Rouvray were struggling to come to terms with the bloodshed in their small town, so far from France’s tourist hubs.

They made their way to a makeshift memorial to lay flowers, candles and messages of peace – a ritual that has become chillingly familiar from Brussels and Paris to Nice and Munich, all cities that have been struck by attackers inspired by the Islamic State group.

‘A war of religions’

The two jihadists were gunned down by police after leaving the church, marching three hostages in front of them, shouting “Allahu akbar” (God is greatest).

Prime Minister Manuel Valls has warned that the goal of the attack, claimed by Islamic State jihadists, was to “set the French people against each other, attack religion in order to start a war of religions”.

In an editorial, Le Monde newspaper recalled a key strategy of ISIS, to eradicate the so-called “grey zone” in which Muslims live peacefully alongside other religions, making it so uncomfortable for them to do so that they are forced to join ranks with the jihadists.

“France comes under attack because it is made up of one of the biggest Muslim communities in Europe. The jihadists’ aim is to provoke violent revenge attacks that will create a religious war in our country,” wrote the daily.

Dalil Boubakeur, the head of France’s Muslim community, voiced his “deep grief” at the attack which he described as a “blasphemous sacrilege which goes against all the teachings of our religion”.

Following the meeting with Hollande he urged stepped-up security at places of worship.

“We deeply desire that our places of worship are the subject of greater (security) focus, a sustained focus,” he said.

Hollande also met his defence and security chiefs, who tried to find new ways to reassure a jittery population as his government comes under fire from the opposition over the repeated attacks, some nine months ahead of a presidential election.

Defence Minister Jean Yves Le Drian said the 10,000-member Sentinelle military force – deployed after an attack in January 2015 – would be spread out more in areas outside Paris.

Interior Minister Bernard Cazeneuve vowed that events taking place across the country over the summer months, in which the majority of French people flock to holiday spots, would take place under tight security.

He said local government officials should cancel events “if conditions do not allow for optimal security”.

‘Where are the police?’

The government, already under pressure after the Nice attack, faced more questions over security weaknesses after it emerged one of the church attackers was known to anti-terror investigators.

Paris prosecutor Francois Molins said Kermiche twice tried to travel to Syria under a false identity. After his latest arrest in Turkey in May 2015, he was held in custody until March this year when he was released and fitted with the electronic bracelet.

Le Monde reported that he had spent time in a psychiatric unit, showing signs of psychological problems reported in many of the attackers inspired from afar by ISIS.

“It should not be possible for someone awaiting trial on charges of having links to terrorism to be released” on house arrest, said the deputy chief of France’s police union, Frederic Lagache.

Mohammed Karabila, who heads the regional council of Muslim worship for Haute Normandie, where the church attack took place, asked simply: “How could a person wearing an electronic bracelet carry out an attack? Where are the police?” – Rappler.com