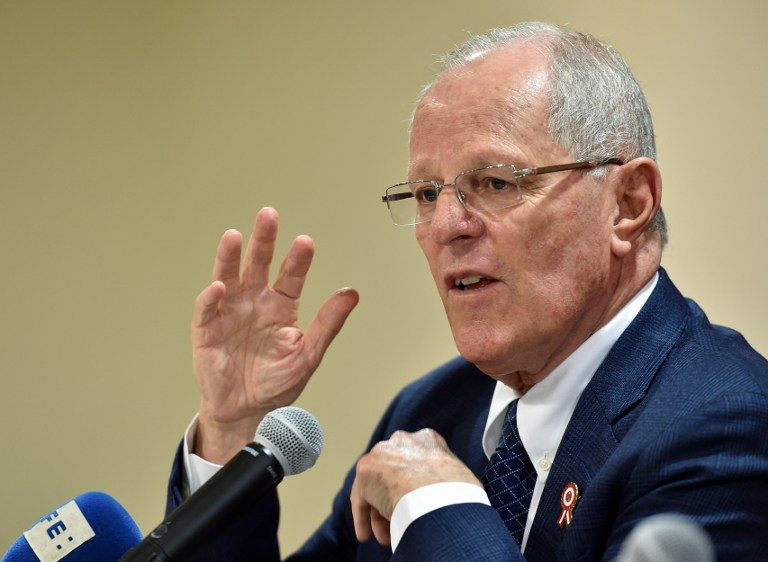 Since winning the run-off race by a razor-thin margin last month, the man known as PPK has named a politically inoffensive cabinet of technocrats and extended olive branches to rival parties.

Peru is one of Latin America’s fastest-growing economies, but growth slowed under outgoing leftist President Ollanta Humala, from 6.5% in 2011 to 3.3% last year.

Kuczynski, 77, has vowed to stimulate the economy, revive the key mining sector, fight the poverty that affects 22% of Peruvians, and strengthen the police and prisons to reduce crime.

But his party, the center-right Peruvians for Change, has just 18 seats in the 130-member Congress.

The new legislature is dominated by the party of his defeated rival, Keiko Fujimori, the daughter of disgraced and jailed ex-president Alberto Fujimori.

Her party, Popular Force, has 73 seats.

That could make it hard for Kuczynski to advance his reform agenda.

There may be lingering bad blood from the election – Fujimori took 5 days to concede as results trickled in from the remote reaches of the Peruvian Amazon.

In the end she had little choice but to recognize defeat, by less than a quarter of a percentage point.

The race opened old wounds dating back to the 1990s, when Fujimori’s father Alberto was president.

Now serving a 25-year prison sentence for massacres by an army death squad, Alberto Fujimori (1990-2000) is fondly remembered by some Peruvians for his populist streak, his ruthless crack-down on the leftist rebel group Shining Path and his management of a strong economy.

But his authoritarian legacy was also heavy baggage for his daughter.

Her 78-year-old father’s supporters are now pressuring Kuczynski to pardon him.

The president-elect has said he is willing to sign a law granting house arrest to elderly and ailing prisoners such as Fujimori, but will not issue a pardon.

Kuczynski, the son of a Jewish doctor from Germany, has had a long career in business and finance.

Educated at Oxford University and Princeton, he has an impressive resume including stints as economy minister and a World Bank economist.

He stressed his age and experience during the campaign.

“I am old, but my noggin is still working,” he said.

But he sometimes struggles to connect with ordinary Peruvians.

He speaks Spanish with an American accent, betraying his long years in the United States. Some Peruvians call him “El Gringo.”

Seeking to lighten the baggage of his outsider status, he donned a traditional multicolored woolly hat at campaign rallies, played the flute and trotted out his mascot, a man-sized guinea pig – a symbol of Peru.

Since winning the election, he has promised to bring a “social revolution” to Peru by extending basic services such as schools, hospitals and drinking water to the one-third of Peruvians who lack them. – Rappler.com