Facebook Twitter Copy URL
Copied
(UPDATED) Obama: 'I can say with confidence there has never been a man or a woman – not me, not Bill (Clinton), nobody – more qualified than Hillary Clinton to serve as president of the United States of America'

PHILADELPHIA, USA (UPDATED) – US President Barack Obama on Wednesday, July 27, called on Democrats to carry Hillary Clinton to victory over Donald Trump, saying the 2016 White House race was not just about party politics, but the nature of American democracy.

The two-term president offered potent testimony on the third night of his party’s national convention about how Clinton, his onetime rival, became an ally and trusted advisor.

Painting Republican nominee Donald Trump as a know-nothing who cozies up to dictators, Obama said November’s vote was “not just a choice between parties or policies; the usual debates between left and right.”

“This is a more fundamental choice,” he said, telling convention delegates in Philadelphia – the city where America’s constitution was written – that this was a battle for the very “meaning of our democracy.”

“This is a more fundamental choice – about who we are as a people, and whether we stay true to this great American experiment in self-government,” he said.

Obama spearheaded a day-long effort by Democrats to depict Trump as unfit to be commander-in-chief, contrasting the political neophyte with his more experienced Democratic rival.

“He’s betting that if he scares enough people, he might score just enough votes to win this election.”

“America’s never been about what one person says he’ll do for us – it’s about what can be achieved by us together,” he said.

No one more qualified

Acting as a character reference for his secretary of state of 4 years, with whom he battled in the 2008 primaries, Obama offered a comprehensive endorsement of Clinton as the one person uniquely qualified to succeed him.

He said the 68-year-old former first lady and senator knew what it’s like to be in the room when tough epoch-making and presidency-breaking decisions were taken – like the move to strike Osama bin Laden.

“I can say with confidence there has never been a man or a woman – not me, not Bill (Clinton), nobody – more qualified than Hillary Clinton to serve as president of the United States of America,” he said.

At the end of Obama’s speech, Clinton – the first woman to win the presidential nomination of a major US political party – arrived on stage to deafening shouts from the party faithful.

Framing the battle ahead 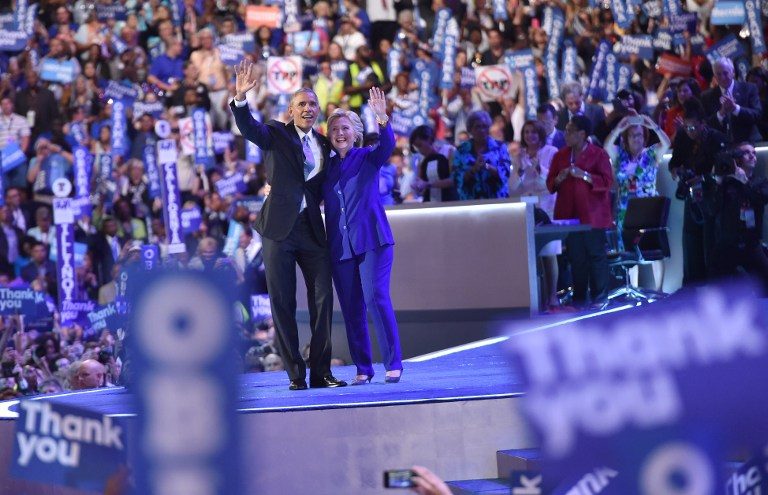 Earlier in the day, Trump launched a pre-emptive attack against Obama, calling him “the most ignorant president in our history.”

The Republican nominee also sparked howls of outrage from Democrats with a reference to thousands of Clinton emails held on a private server that were deleted.

“Russia, if you’re listening, I hope you’re able to find the 30,000 emails that are missing.” Trump said.

Clinton says the emails were personal and not work-related, but for Republicans, it is a smoking gun for a cover-up involving her use of a private server during her time at the State Department.

The FBI concluded this month that Clinton had been “extremely careless” in her handling of classified material via a private email server, but did not recommend that she face criminal charges.

“He asked the Russians to interfere in American politics. Think about that,” former CIA director Leon Panetta told the convention before Obama took the stage.

“As someone who was responsible for protecting our nation from cyber-attacks, it is inconceivable to me that any presidential candidate would be that irresponsible.”

Now in the twilight of his second term, Obama faces ever-dwindling opportunities to address the nation, mold his legacy and influence the 2016 race.

But on Wednesday, he had a prime-time chance, appearing before thousands of delegates and tens of millions of viewers at home.

The White House said Obama had been working on the roughly 45-minute speech for weeks.

Yet this touchstone presidential moment had been a decade or more in the making.

The address bookends Obama’s career-launching address to the Democratic convention in 2004, his contentious 2008 primary battle with Clinton and his eight years in office.

Obama made a familiar case for what has been achieved during his two terms, highlighting America’s recovery from the Great Recession, the Iran nuclear deal and reforms to health care.

But this was also a passing of the party torch.

“I have confidence as I leave this stage tonight that the Democratic Party is in good hands,” Obama said, appearing to become emotional.

“Thank you for this incredible journey,” he said before his long exit from the stage. – Rappler.com